Please give a warm welcome to Hatch from Numbers Game by Desiree Holt & Liz Crowe today as we sit down and see what makes him tick.

Well, urban legend has it that Liz and Desiree are both football fans. Desiree in particular is a Michigan fan and Liz was living in Ann Arbor when she helped organize a fundraiser that honored the Harbaugh brothers. One of the cool bennies were commemorative footballs that both brothers signed. Liz snagged one for Desiree and sent it to her as a sort of a bribe to get her to write my story. I, too, returned to my Division one alma mater in Michigan after a pro career got a little, um, derailed and have been working like a Harbaugh to get it back to prominence.

Her legs…or rather, her smile. And her legs. But mostly her amazing sports knowledge, her smart ass tendencies, her willingness to let me win a footrace. Have I mentioned her legs?

Oh boy, let’s see….I guess it was that time on the boat? No, no, wait, it was that time when we were at a fancy black tie fundraiser in Detroit, at one of those renovated old buildings with the giant fancy bathrooms. Yeah. There. In the foyer of the ladies’ room. Almost got caught that time. But it was totally worth it.

Can I compromise and say “boxer briefs?” I played too many years of football to feel comfortable letting things sort of wave in the wind, if you get me.  Q: If your partner wants to seduce you, what's one sure fire trick they can do to seduce you?

You know I’m a guy right? All I require is my beautiful woman and a few feet of space, be it horizontal or vertical. But if she’s feeling super naughty, she knows that I am a huge fan of shower….intimacy.

She’s pretty sensitive on a lot of places, but my favorite place to touch her, sometimes kiss because I can do it in public and I know it drives her wild, is a spot right below her ear, on her neck. It’s like an On-Switch and I use it a lot.

Q: What was one of the most embarrassing things your author did to you in Numbers Game?

Liz was pretty good to me really, but she made me pay for that first night I spent with Olivia, when my coaching staff all took bets on whether or not my “date” would “go late” (it did) and made a huge deal out of it at or team meeting.

Just that I’m so grateful to Liz and Desiree for telling my story, letting me redeem myself, and find love with the most amazing woman in the known universe, Olivia Grant!

Thank you Hatch for joining us on 'Meet the Character' day here at Dawn’s Reading Nook Blog. You can find all of  Liz & Desiree’s books on Amazon and other ebook sellers. 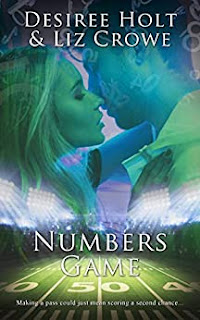 Making a pass could just mean scoring a second chance...

Former NFL player and coach Duncan "Hatch" Hatcher fumbled his career and marriage. Now divorced and ready to tackle his future, he has an opportunity to redeem himself as coach of his college alma mater's football team. But how can he can turn the team's losing streak around and keep the secret of his downfall buried when the school agrees to a documentary that will allow a lovely journalist to dig her way into his past...and into his heart?

Olivia Grant's ex-husband almost wrecked her journalism career while he definitely did a number on her self-esteem. The documentary on Duncan Hatcher is the perfect way to rebuild both. As a freshman in college, she'd had a crush on the senior football hero, but he hadn't known she existed. She never expects the sparks that fly between them as they work on the project nor the struggles they must face if they both want to win.

After she disconnected, Olivia stood for a moment staring out the window. Would she never be free of Daniel Forrest? Marrying him had been the biggest mistake of her life. Being young and foolish and starry-eyed wasn’t enough of an excuse. She also had a brain, and she should have used it. Well, she’d use it now and push him out of her mind. What she did was none of his business anymore. If he thought it was, well, she could fight just as dirty.

One thing was for sure, though. If she and Hatch had another meal in public, it better not be at a restaurant like La Plaza. Someplace innocuous, less glamorous and less in the public eye.

Fixing another cup of coffee, she took a sip to settle her brain, then punched the button to call Hatch. Her hand shook only a little as she waited for him to answer.

“Good morning.” His deep voice rumbled through the connections, setting off her hormones again. Was he happy she’d called? Irritated?

For god’s sake, Olivia. Quit acting like a deflowered virgin after prom night.

“Good morning. I, uh, wanted to thank you for a nice evening last night.” She wondered if he’d think she was talking about dinner or the sex?

“We still didn’t get started on the personal interview part of this process.”

“So, you’re still good to go with the whole thing?”

There was a second of dead air when she thought her heart would stop.

“More than good,” he said at last. “Olivia, I hope last night was as great for you as it was for me. I haven’t spent time with a woman in what seems like ages, and I enjoyed every minute of it.” Another pause. “Every minute. I hope you did, too.”

Liz Crowe is a Kentucky native and graduate of the University of Louisville living in Central Illinois. She's spent her time as a three-continent expat trailing spouse, mom of three, real estate agent, brewery owner and bar manager, and is currently a social media consultant and humane society development director, in addition to being an award-winning author. With stories set in the not-so-common worlds of breweries, on the soccer pitch, inside fictional television stations and successful real estate offices, and even in exotic locales like Istanbul, Turkey, her books are compelling and told with a fresh voice. The Liz Crowe backlist has something for any reader seeking complex storylines with humor and complete casts of characters that will delight, at times frustrate, and always linger in the imagination long after the book is finished.

thanks so much for having me!