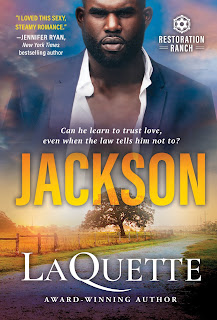 Restoration Ranch may have been the first step on her road to redemption…but Jackson Dean will be the last mile.

Aja Everett longs to turn her old family ranch into a place where anyone can find rest and healing. But her big heart’s bound to get her in trouble if she’s not careful—someone wants her gone, and they’ll do whatever it takes to drive her away from the land that’s her lifeblood. Whether she’s willing to admit it or not, she needs help.

Jackson doesn’t trust love. He once made the mistake of following his heart and all he’d gotten was pain in return. But when city-slicking do-gooder Aja Everett asks for his help, he can’t stay away…and as attraction sizzles and protective instincts flare, she may be the only woman able to restore the heart of this Texas Ranger.

Jackson Dean made his way inside the Texas Rangers’ Headquarters and headed straight for his office.  It was early in the morning and he wanted nothing more than to still be in his bed.  Unfortunately, a call from his boss, Major Hargrove, put the kibosh on that plan.

He twisted the knob and switched on the light, waiting a moment for his eyes to adjust to the brightness flooding the room.  He remembered how happy he was to get an office of his own.  The room was nothing much to speak of.  A typical windowless space in a government building made of white concrete walls and filled with metal furniture. But no matter how bland it was, he was still proud to have his name etched on the door because it came with his promotion to team leader eight years ago.

Today, it looked almost exactly the same as it had when he’d first been given the keys.  But at the moment, when sleep hadn’t yet completely let loose its grip on him, boundless pride wasn’t the emotion he was experiencing.  No, it was more like annoyance and frustration grating on his nerves at having to come in early after working in the field late last night.

He dropped his bag on a nearby chair and headed straight for the coffeemaker on top of a metal filing cabinet.  Fresh, frequent, and plentiful caffeine would be the only thing to keep him from getting an insubordination write-up in his personnel file, so he opened a couple of bottled waters and poured them into the machine

A tap on his door grabbed his attention.  He glanced up from it and rested his eyes on the yet-to-start dripping coffee machine and groaned.

“Someone must want me to get a write up.”

Another tap and he pushed away from the filing cabinet and opened the door.

“Morning Jackson,” Major Hargrove didn’t wait to be invited in.  He just assumed the open door was all the invitation he needed.  “Thanks for coming so quickly.”

“I’m still half sleep,” Jackson groaned as he stepped away from the door and made it back to his coffee pot.

“At least you had the chance to go to sleep, I’ve been up for about twenty-four hours since I got this call just before I was about to head home yesterday.”

Jackson stared through narrowed slits.  Hargrove didn’t play with his time.  He stayed when necessary, but he was obsessed with him and his rangers having a clear work-life balance.  Nothing kept him from punching out at six in the evening unless there was a real emergency.  “You made it sound like it was life or death that I came in at,” He raised his left wrist pretending to read the wide-faced watch there. “ass O’ clock in the morning.  What’s going on Major?”

His boss slid a file on Jackson’s desk and took the seat in front of it waiting patiently for Jackson to fill the mug he’d grabbed the second the alarm on the machine told him his brew was ready.

“You’re not gonna put any milk or sugar in the rotgut?”

“No sir,” he replied, sitting down and taking a long slow sip.  “I like it the way it is: strong and black, just like me.”

He took another sip before opening the file.  The first thing that caught his attention was the picture of a woman in a fitted designer dress.  Not that he knew fashion from foam rubber, but the way the black material hugged her full curves, he was certain it had been made or at least tailored, just for her.

“I’m not gonna be ready to read this without at least another cup.  Just give me the highlights.  Who is she?”

His boss crossed an ankle over his knee and tilted his head.  “She’s the niece of a friend.  A judge in Hill Country.  Her property has been vandalized and the judge needs someone to look into it.”

Jackson felt his brow inching higher into his hairline.  Something about the way Major Hargrove said “someone” scratched at his bullshit meter.

“What do the locals have to say about it?”

Hargrove lifted an open palm before letting it fall back to his knee.  “Not a thing.  There’s some bad blood between the local sheriff’s department and Ms. Everett.”

Jackson shifted in his seat, the coffee plus his boss’ preliminary recount was starting to sketch an outline to this tale of a spoiled judge’s niece using her uncle’s connections to get what she wanted.

“Anyway, the judge wants to make sure this is taken seriously.  Especially since the vandalism has escalated from fence posts and a scaffold being knocked down to her barn being burned to the ground yesterday.”

Jackson sat up straighter. “Anyone hurt?”

“Minor cuts and bruises on Ms. Everett.  Her uncle called me while she was being seen at the hospital.  Asked me to get her a protective detail and send a team out to investigate.”

“She pointing fingers at anyone?”

Hargrove stood up and tapped on top of the beautiful woman’s picture.  “Don’t know.  But you can ask when she gets here.  I assigned Jennings and Gleason to her protective detail overnight.  They’re bringing her in first thing this morning so she can swear out a statement.  Get your team together and figure this thing out.”  He walked toward the door confident his orders would be followed.  And they would be.  Jackson might give his boss shit, but he always got the job done.

He looked at the picture of one Ms. Aja Everett again.  He ran his finger slowly over the high cheekbones that turned her eyes into barely-opened slits as her wide grin smiled back at him.  “Why would anyone want to harm you?”

Excerpted from Jackson by LaQuette. © 2021 by LaQuette. Used with permission of the publisher, Sourcebooks Casablanca, an imprint of Sourcebooks, Inc. All rights reserved.

GIVEAWAY
a Rafflecopter giveaway
About the Author

LAQUETTE writes savvy, sexy contemporary romance. She is the 2016 Author of the Year Golden Apple Award Winner, 2016 Write Touch Reader’s Choice Winner, and a 2018 Passionate Plume Finalist. She is an advocate for the #WeNeedDiverseRomance campaign. LaQuette, a native of Brooklyn, lives in Pennsylvania with her family. Learn more about her at LaQuette.com

By DawnsReadingNook at February 28, 2021