Discover the world of author Jeny Heckman in their latest book, The Warrior's Progeny. Don't forget to enter the tour wide giveaway as well as Jeny Heckman will be awarding a $25 Amazon/BN GC to a randomly drawn winner via rafflecopter during the tour. Find all the tour stops HERE and this tour is sponsored by Goddess Fish Promotions.
Now let's chat with the author, Jeny Heckman

I wrote my first book, The Catch, just to see if I could write a book, back in 2008. I sat on it for a long while as life with a busy family intervened and my fear of publishing stopped me from putting it out there. My son told me to do something with it one day, so I self–published it on his birthday in August 2015. It was such a fun experience that I decided to try my hand at a series, and pitched an idea to an agent from New York, at a writing conference. She loved the idea and I started the Heaven & Earth Series. The first book, The Sea Archer was picked up by a New York publisher and the rest is history.
Do you have a favorite genre? Is it the same genre you prefer to write?
I love most genres, but my guess would be romance thrillers. The kind that are all twisty and screw with your mind. An example would be Gone Girl. I also love paranormal-fantasy romances with a historical twist like Outlander, but also snarky ones like Darynda Jones, Charley Davidson series. And then there’s…let’s just say, I like to read!
Do certain themes and ideas tend to capture your writer’s imagination and fascinate you?
I like different. I am not a fan of the cookie cutter books. The kind where it’s like a clockwork formula. A will happen then B, then C. I like when it isn’t necessarily happily ever after, and you’re okay with that. I’m always in awe when people write sweeping epics and their beautiful use of the entire English language painting a colorful picture.
How do you balance long-term thinking vs. being nimble in today's market?
I don’t write to the market. If something interests me, I’ll write about it. For the simple reason that it will stay with me and nag at me until I do.
How do you find readers in today's market?
It’s hard because this is the other side of writing. The marketing and business side. I try to promote the books in fun and different ways. The Warrior’s Progeny was my first major book launch, and I had so much fun, I’m going to do more of them. In other words, I have no idea and most of it is trial and error.
Do you come up with the hook first, or do you create characters first and then dig through until you find a hook?
For me writing is all about the characters first. Why are they the way they are, what is their motivation, what do they look like. After the main character or characters are discovered and fleshed out, the story or hook comes pretty easily. The process is such a fun ride.
How do you create your characters?
So, I started saying it above but I first decide why someone should care about the character. What makes them unique. I have a kind of questionnaire thing I write out. I decided what they will look like next and any quirks they have. I enter those details into Google and celebrities and get a huge bank to choose from. I like actors or celebrities because they generally have many different looks, poses and characters. I put them on my desktop as I’m writing scenes, just as a little thumbnail. When I do that it’s easier to envision the way they sound and move. It’s a little labor intensive but well worth it.
What's on the top of your TBR pile right now?

On my nightstand right now is…

A Bad Day for Sunshine by Darynda Jones

The Prophet by Kahlil Gibran
Tell me a little about the characters in The Warrior’s Progeny.

Colt Stone: is a Seattle warrior football tight end, recently traded from Texas. He’s the descendant of Ares, god of violent war. He comes to Seattle ready to make some changes in his life.

Lilly Stone: is a pediatric cardiothoracic surgeon from Seattle. She’s a widow with two kids. She’s the descendant of Hera, goddess of marriage and childbirth. She’s had a hard time moving on from the death of her husband four years prior.

Dee Taylor: returns as the quirky grandmother everyone knows and loves. The prophecy came to her first in The Sea Archer, book one. She’s the descendant of Demeter, goddess of agriculture.

Raven Hunter: is a singer-celebrity and returns as a “first quester” from The Sea Archer. She is the descendant of Apollo, god of music. It’s her job to convince Lilly she is part of this new world.

Finn Taylor: is a marine biologist, also a “first quester” from The Sea Archer. He is the descendant of Poseidon. It’s his job to convince Colt he is part of this new world.
Where’s the story set? How much influence did the setting have on the atmosphere/characters/development of the story?
The story is set in Seattle, Washington and Kauai, Hawaii. It has a big influence. When the two characters meet, they are on the lovely island of Kauai, but their meeting is anything but romantic! Their relationship really begins in gritty Seattle, there may be some irony there.
If you had to write your memoir in five words, what would you write?
The adventure of a lifetime!
How often does your muse distract you from day to day minutiae?
Every second, of every minute, of every hour, of every day! I’m the most easily distracted person in the universe I think!
What do readers have to look forward to in the future from you?

I’m finishing a side novella entitled, Dee’s Cornucopia. I’m working on an off-genre political thriller and I am fleshing out a YA series. Next year I will have out book three of the Heaven & Earth series. So, stay tuned.

Thank you for spending some time with me today. I really hope you like The Warrior’s Progeny. And thank you Dawn for hosting me today, I’m really honored to be here. 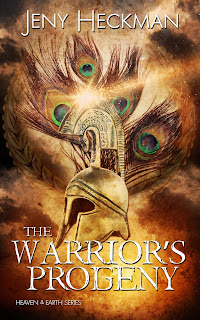 Colton Stone is a newly traded tight end whose reputation is as battered as his football helmet. When he receives a vacation invitation from his new teammates, he accepts. There he collides with Dr. Lillian Morgan, a pediatric cardiovascular surgeon, and doesn't know what to think.

A widow with two children, Lilly travels to Kauai to attend the wedding of a friend and witness the union she lost three years prior. When she meets Colt, she struggles between letting go of her perfect past for an uncertain future.

Strange events begin to occur, out of the realm of normal consciousness. Black energy touches their world and the couple become pawns of the immortal Greek gods. Is the love between them real, or part of a larger prophecy?

Colt’s body temperature heated until his helmet, now that of a Trojan, melted and became part of his skull. Painful, thick, fire plumes ignited from the sides of his head and curved toward the sky, until they solidified in a solid line down the middle of the helmet. Black snake-like smoke wafted up from the earth and encircled his ankles and wrists, locking him into place.

The smoke turned into bindings and massaged tentacles over his chest and phallus.

He looked over at Lilly, who now knelt helpless as her skin became dusky, then turned a brilliant shade of blue. However, the color became an iridescent hue that reminded him of something just outside the confines of his mind. Her skin bubbled, separated, and formed into thousands of compact hairs. Small points protruded from her shoulders and down her arms until they freed themselves from the surface of her skin, as she screamed. Several long, hollow shoots grew, lengthening into the elegant, arching rods, as more buds sprouted from them and turned into thready feathers. As the feathers lengthened, green and blue eyes opened in intervals. At a screech of transformation, Lilly turned into a peacock, whose tail plumed out in a perfect fan. A feathered diadem lifted from her skull and the beautiful eyes all blinked at him. He wanted to mate with her, devour her, possess her, and bellowed out an unearthly warrior battle cry. Breaking his bonds, he charged at her.

These buy links are the pre-sale: 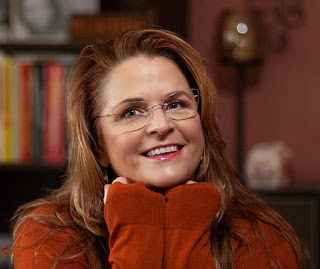 Award-winning author, Jeny Heckman, was born in Bellingham, Washington, and was the youngest of two daughters. She met her husband, Jeff, in August 1992, and eloped three months later, at Magen’s Bay, on St. Thomas, U.S.V.I.

She wrote her first book, the Catch, in a few short months but took several years before she gained the courage to self-publish it at her son’s urging, and her love for writing began.

In 2018, Jeny knew her next project would be a series that showed adults could have adventures in the paranormal-fantasy genre too. So, she created the Heaven & Earth series, a story of doomed Greek gods and their only salvation, their modern-day descendants. Her first book of the series, the Sea Archer, was immediately picked up by the New York publishing house, the Wild Rose Press, and won, “Best in Category” from the 2018 Chanticleer International Book Awards.

In the year 2020, Jeny released, Dancing Through Tears, a short story from the anthology, Australia Burns: Volume Two, highlighting the Route 91 massacre from the perspective of one family at the concert, and at Mandalay Bay. She also intends to release, the Warrior’s Progeny, and Dee’s Cornucopia, in 2020, continuing the Heaven & Earth Series.

Jeny lives in Washington State with her husband of over twenty-eight years.

Good morning Dawn to you and all your readers! I'd like to sincerely thank you for having me on today!

Great excerpt and interview, I enjoyed reading them!

Do you have any ideas for a follow up?

Thanks, Victoria! Hi Bernie, yes there will be four more books in the series. I began book 3 last week!

Thanks for the great excerpt and blurb. It sounds like an exciting book.