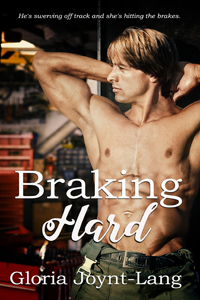 Please give a warm welcome to Gage O’Neill from Braking Hard by Gloria Joynt-Lang today as we sit down and see what makes him tick.

What’s your favorite thing to do when you’re not helping customers?
I’m fortunate to live along the magnificent Oregon coast. When I’m not inside Big C’s Automotives, I’m outdoors. I love sandboarding, hiking, and off-roading. I bought an old Jeep Wrangler several years ago and transformed her into a beast of machine. She’s great for pounding through the sand dunes.

What is it about Eden Sampario that makes you crazy in a good way?
Eden’s fiercely independent and I love that about her. She’s an amazing mechanic and Big C’s is lucky to have her. I’m lucky to have her. But she hates when I spoil her, especially if it involves shelling out money. I’m not complaining as the woman is darn near perfect, but I do wish she’d let me do more for her.

Do you sometimes want to strangle your writer?
Absolutely. I’ll give you an example. I’m plugging along in life, doing pretty good. I’m running a successful business, I’ve got a wonderful family, good friends, and this hot girlfriend. And then, bam, my business partner dies. Gloria claims she had nothing to do with it, and that it was simply Elroy’s time, but I’m not buying it. And even if she wasn’t responsible, she did nothing to stop it.
After Elroy’s death, things spiraled. My business started to tank, my girlfriend…well, let’s not get into that right now. And did I mention I nearly bought a llama? Sorry, I have a tendency to stray off topic. Anyways, you get the picture. Life went down the tubes. I was really ticked at Gloria.  But then she writes Eden, my dream woman. So, yah I want to strangle Gloria but also want to give her a big hug.

Do you have a Favorite food?
Practically anything my mom cooks. She’s Italian and makes the best pasta dishes, including Lasagna. Her tiramisu is out of this world, but I try to limit myself. Sugar and I are not on the best of terms.

Tell me a little bit about your world. What are your greatest challenges in that world?
I’m a glass half full type of guy so I don’t complain about much. I’ve had my share of challenges, but I’ve worked hard to make a life for myself. As anyone in Storm Harbor can tell you, I was the hyper kid who constantly got into trouble. Slowly things turned around for me when I met Elroy. The elderly man noticed I had skills beyond hot wiring cars. He took me into his garage and mentored me. I may be unable to sit still and focus, but give me a broken-down car, and I’ll have her running. I feel the most comfortable with a wrench in my hand. I still struggle with ADHD—Attention Deficit Hyperactivity Disorder for those unfamiliar with the term—but I learned to channel my energy into something positive. I’m still a disaster when it comes to schedules, and I stray off topic more than I should. I’m doing that again, aren’t I? Sorry. Oh, I forgot to add insomnia. I have these terrible bouts of insomnia. My mind just won’t shut down.

Describe yourself in four words.
There’s a lot of words to describe me but I’m going to focus on my good traits. I’m energetic, inventive, a problem-solver, and, according to my friends, I’m kind to a fault.  To me kindness can never be a bad thing. Sometimes people take advantage of my generosity, but I like helping others.  Elroy made a difference in my life, and I try to pay it forward.

What do you do for a living?
As you’ve probably figured out, I’m an automotive mechanic. I’m also a technician. There’s a distinction between the two. Eden’s trained in both as well. I’ve been working on cars since I was twelve years old. I’m also a businessman. I’ve been co-owner of Big C’s Automotive since I was eighteen. I was Storm Harbor’s entrepreneur of the year a few years back. The Mayor of Storm Harbor presented me with a fifty-dollar gift card and a framed certificate. Not a big deal to some people, but it meant a lot to me.

What do you fear the most?
Not being a good enough father. I’m worried my ADHD will make me too distracted. I’ve had this stupid reoccurring dream where I drive off with the baby carrier on top of my vehicle. I normally make lists so I don’t forget, but I can’t exactly leave a sticky note on my Jeep. We get a lot of rain here in Oregon. Notes on vehicles are futile. Maybe I’ll scrape getting that wrench tattoo and ink Check for baby on my forearm. I better not make any rash decisions. Besides I’m not planning on having kids anytime soon, but I’d love to be a dad one day. Hey, I got it. Gloria can resolve this issue when she writes the next book in the Storm Harbor Series. I’m sure my cousin Cole won’t mind if I sneak into his story from time to time.

Gage O'Neill is an all-around nice guy and an Adonis in coveralls. With a thriving automotive business, a gorgeous girlfriend, and his ADHD under control, life is pretty incredible. But when he loses a loved one, Gage's perfect world unravels. Prone to bad choices, he's desperate to quell his rash behavior. Thankfully, hiring a curvy mechanic is the one impulsive decision he's gotten right.
Eden Sampario is destitute as a result of a confrontation turned violent with her former employer. When Gage mistakenly offers her a job, she readily accepts. But soon she wonders if she made the right decision. Resisting her sexy boss proves more challenging than an engine rebuild. Her only other option? Give in to temptation and risk not only her career but also her heart.
Welcome to Big C's automotive shop, a place where more than cars overheat.

“Eden, that night I couldn’t take my eyes off of you,” he blurted as his legs pulsated beneath the desk.
Her friendly demeanor vanished.
“No,” he exclaimed, realizing she misinterpreted. “I didn’t mean it that way. I saw your grief.” Thankful, he avoided saying he felt her grief. Definitely creepy, although accurate. “It’s why I followed you into the parking lot,” he added, rushing to get it all out.
Her chair scraped across the floor as she pushed herself back and stood.
“Sorry, that didn’t come out right. Please,” he begged, “let me explain.”
She gave a hesitant nod, layered with a thick warning in her eyes. This was his last chance to get it right. If he sputtered anything remotely stupid, she’d bolt.
“I was in shock. Still am, I guess. I hadn’t expected Elroy to…” He bit down on his lip. “Losing someone you love hurts. A hurt I can’t even describe. It overwhelmed me. I hated being at that wake, yet I’d hate myself more if I wasn’t there. My sorrow surpassed any logical thought, and honestly, I’m not always the most logical person.” He stopped babbling and studied her for a moment. “I don’t need to tell you about grief, do I?”
She nodded.
He waited for her to speak. All he heard was his pulse thumping. Again, he broke the silence. “The people in that bar missed Elroy. He meant a lot to this community. But Elroy wasn’t just…” A lump formed in his throat, forcing him to swallow before proceeding. “The man was like a father, and when I saw you, I got the feeling Elroy and you shared something special.”
Her eyes widened.
He winced. If there had been duct tape nearby, he would have considered ripping a strip to place over his mouth. He rolled his shoulders, pleading for the tension in his body to disappear. “I’m trying to find out how you knew Elroy, I’m sorry if it sounds like I’m implying—”
“No, we weren’t lovers.”

Gloria Joynt-Lang was born in France and raised in various locales throughout Canada. Before she started writing contemporary romance, she worked in the criminal justice system—technically spending time behind bars.

As a Canadian, she’s fanatic about hockey,  poutine, and apologizing.

She currently resides in rural Alberta with her husband and their two dogs.

By DawnsReadingNook at February 10, 2020

Intriguing character interview. Thanks for sharing.