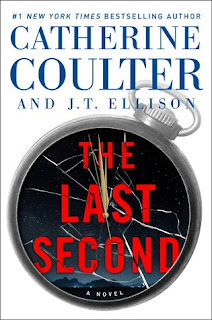 FBI agents Nicholas Drummond and Michaela Caine are back on the job and this time the evil plan the bad guys have can end the world as they know it in the Sixth book in a Brit in the FBI Series.

My Rating for THE LAST SECOND: 5 Stars and a Series Recommend Read

Buy The Last Second at Amazon

For FBI Special Agents Nicholas Drummond and Michaela Caine, recovering from their last adventure in saving the world has given them a few days of peace but when one of their friends is lost at sea on a regular security job, they leap into action and find they are in the middle of a case that will change the face of the world if it succeeds.
Former astronaut Dr. Nevaeh Patel is booted from the NASA program after an unexpected calamity when she was out on the International Space Station. Deemed crazy as she raved that aliens called the Numen, wanted to bring peace to the world when they saved her. Pushed from the world and a job that she has trained for over the years, Patel is determined to quiet the space above earth with an EMP attached to nuclear device on a satellite for the Numen and help remake the world into her favor. But as Drummond and Caine find out, all things are not as it seems when the fabled holy grail is found then stolen by Patel. With the clock ticking, they must stop Patel from activating the EMP and bringing about World War III.

THE LAST SECOND is a thrill ride from start to finish and these two authors deliver the thrills and chills with a breakneck speed that will leave you breathless. I love this series and find each book a thrill a minute as the cases Drummond and Caine get involved in are intriguing and unique. The series just gets better with each book and I love how the characters continue to grow with each book. Ms. Coulter and Ms. Ellison deliver lots of action scenes that left me gasping as I flipped the pages on my kindle. The mythology of the Holy Grail was intriguing one that added much to the other aspect of the storyline, the ‘aliens’ and their representative here on earth, Dr. Patel. The story starts off slow as we meet the new players in the series and catch up with Drummond and Caine who are taking a much-needed break after their last adventure almost killed them. This time going to help a friend leads them into a bigger mystery that leaves them nothing to do but see to it till the end.  Full of amazing characters that fairly leap off the pages and a storyline that just keeps you glued to the edge of your seat, the reader is lost within the pages of THE LAST SECOND till the very end.

THE LAST SECOND delivers so much within the pages that you can not help but get sucked in. I couldn’t put this book down and I just loved all the twists and turns the characters took as they chased down leads to Patel and her evil plot to ‘quiet’ the world. These two authors are so good together in this series and I loved every minute of THE LAST SECOND. If you haven’t read A Brit in the FBI series, then I highly recommend it, though start at the beginning with book one, The Final Cut, as you get to meet all the main players and continue from there to the other books in the series. I am looking forward to seeing where these two authors go next in their next adventure for Drummond and Caine as well as the rest of the Covert Ops group of the FBI. Run-don’t walk-to the check this series out. You won’t want to miss all the fun times they get into and the unique cases they need to solve.

A Brit in the FBI Series Reading Order:

Check out the Series on Goodreads
By DawnsReadingNook at March 26, 2019