Book Review- Close to the Bone by Kendra Elliot 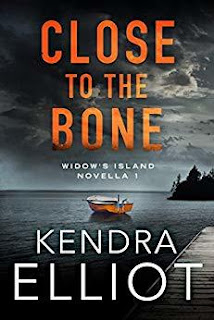 Be welcome to Widow's Island and get ready for the mystery that surrounds the island as a murder brings up a past case that haunts FBI agent Cate Wilde and island deputy Tessa Black.

My Rating for Close to the Bone: 3.5 Stars

Find Close to the Bone at Amazon

FBI Special Agent Cate Wilde is back on the Pacific Northwest island she once called home, recovering from an injury when she gets a call of a body found on a nearby island. But with memories of a past case haunting her, reconnecting with an old friend who is now a local deputy, Cate is racing against the clock to figure out the clues even as she finds herself falling for the local coroner. Will Cate be able to find justice for the victim even as her memories of a similar case twenty years before haunting her?

I love this author’s Mercy Kilpatrick series and was intrigued by this new series she is writing with author Melinda Leigh. Overall, CLOSE TO THE BONE had potential to be a really good book if it was just a tad bit longer. For the length it was, I felt I couldn’t connect to the characters like I normally do. The storyline felt stilted in spots and rushed in others. The ending was a little too pat for my liking though the bad guy(s) were quite a surprise to me. With the premise of an island that if you leave, you want to come back home and if you don’t belong, the island will let you know one way or another. I liked the mystery that was hinted about between Cate and Tessa, one that haunts them to this day. It intrigued me whenever Cate and Tessa talked about it and it made the mystery of this new death on an adjacent island to Widow’s Island a bit more intriguing. The author tries to give the reader much within the number of pages that was in the book but for myself, it falls short. What I wished was the author expanding the story just a little more and expanding the story a little more but overall, it works within the novella format to a degree.

CLOSE TO THE BONE introduces new and old characters that had me smiling at times and some characters were from this author’s other series, so I am going to have to check that out later. Ms. Elliot delivers a new series that will keep you intrigued at times with a thriller that will intrigue the readers and flipping pages. The downside is its too short in my opinion. I look forward to seeing where Ms. Elliot and Ms. Leigh go with the characters in Widow’s Island series in future books.