New Hopeland City may be the birthplace of Tech Shifter gear, but it isn’t the only place that likes to blend technology with folklore. Now, a new nightmare is stalking the streets… When PI Cassie Tam is attacked on the way home one night, she expects the police to get involved. What she doesn’t expect is to be forced into acting as bait to lure out a lunatic in a tech-suit that’s literally out for blood. But past actions have consequences, and doing so may be the only way she can get a clean slate from the city’s law makers. If only that didn’t mean having to face down a wannabe vampire.

LV48 Matt Doyle © 2018 All Rights Reserved “Nei hou gaau siu.” When Lori smiles like that, her eyes take on a slight twinkle, making their pale blue tone feel warm and welcoming. That being the case, it takes me a moment to realise I didn’t understand a word she just said. Am I so drunk already? “Uh, sorry. What?” Lori giggles and repeats, “Nei hou gaau siu.” When I stare blankly, she frowns and asks, “Is my pronunciation off? I was sure that was right.” “What were you trying to say?” “I was trying to tell you that you’re funny in Cantonese.” And at that, the laughter spills out of me, uncontrolled to the point I have to bury my face in the table to muffle the sound. If we’d been in our usual haunt, Northern Main Street’s late-night café-cum-alternative hangout Tourniquet, I’d have let loose uninhibited. The people there look like an odd bunch when you’re viewing things from the outside, but if you spend enough time there, you soon realise they’re all really nice people with tastes and hobbies that fall outside the mainstream. Seeing as we’ve opted for Cartwright’s on Dunstone Avenue, though, I’m trying to hold back. Honestly, I am. I’m just not doing a good job of it. The staff in Cartwright’s are lovely, but the clientele is a little less raucous than those at Tourniquet, and so I’m already drawing some confused looks by the time I wipe the tears from my eyes. “I’m sorry,” I say, “I’m sorry.” “I’ve never been much good at languages. Oh God,” Lori sighs and shoots me a now far more nervous smile. “Put me out of my misery. What did I say?” I shrug. “You probably told me I was funny in Cantonese.” Lori tilts her head and says, “Okay, now I’m confused.” “I don’t speak Cantonese.” “Yes, you do.” “I really don’t.” “You really do. I mean, you can’t seriously be telling me you’ve been using diu in the Taiwanese sense?” “No, no…,” I reply, waving my hands in frantic motions. “Wait. What does it mean in Taiwan?” “It was old slang for cool.” “Oh, right. No, I’m definitely using it the way you think.” “So you do speak Cantonese then.” “No, I swear in Cantonese. I couldn’t hold a conversation in it. My dad had a thing about me swearing. He hated it, even when I was an adult. It was the one thing that always made him roll his eyes at Mom. Anyway, he spoke Mandarin, English, and a little French, so my options for big kid words were kinda limited. I went to school with a guy named Tom Huang; he spoke Cantonese, so I got him to teach me the cool words. Dad probably got the gist of what I was saying, but I think he appreciated the ingenuity of it.” And now, Lori laughs and buries her face in her hands. She shakes her head and says, “I am such an idiot.” “Nah, it’s not like I’ve ever spoken Mandarin around you, so how would you know? Honestly, I know enough Mandarin to get by, but we always spoke English at home, so I just picked that up easier. Let’s see, though…you would have meant nǐ hěn gǎoxiào. Or if you wanted to be really over the top with it, nǐ jiӑng shénme dōu néng bӑ wŏ lè huài le. That’s ‘everything you say cracks me up.’” Lori shakes her head. “I think I’ll stick to English.” “I am sorry for laughing,” I say, taking her hand. “It was really sweet of you to try learning something in another language for me. Why that phrase, though?” Lori lets out a short, gentle laugh, and replies, “Every time we’re together, you either do or say something to make me laugh, so I figured it was something I could guarantee I’d get to use.” “I’ll get us another drink,” I blurt, and whip myself to my feet and away towards the counter. It was just a compliment, but still… Did I move quick enough to stop her seeing how red my cheeks are? “Nǐ hěn gǎoxiào,” Lori giggles in broken Mandarin. I guess I was too slow. Diu. 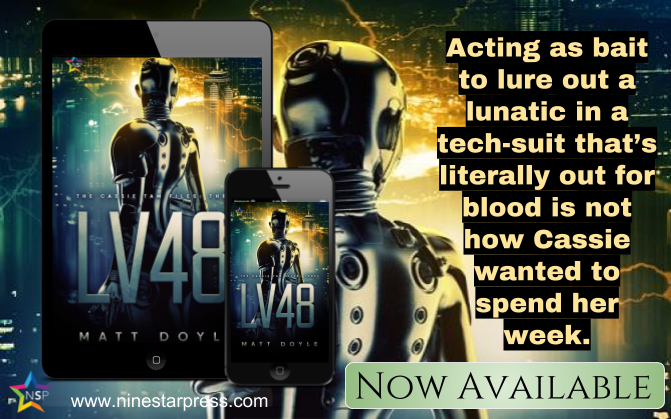 Matt Doyle is a speculative fiction author from the UK and identifies as pansexual and genderfluid. Matt has spent a great deal of time chasing dreams, a habit which has led to success in a great number of fields. To date, this has included spending ten years as a professional wrestler, completing a range of cosplay projects, and publishing multiple works of fiction. These days, Matt can be found working on multiple novels and stories, blogging about pop culture, and plotting and planning far too many projects.

By DawnsReadingNook at December 11, 2018