She was in the wrong place…

Fiercely independent and adventurous, Poppy Bridgerton will only wed a suitor whose keen intellect and interests match her own. Sadly, none of the fools from her London season qualify. While visiting a friend on the Dorset coast, Poppy is pleasantly surprised to discover a smugglers’ hideaway tucked inside a cave. But her delight turns to dismay when two pirates kidnap her and take her aboard a ship, leaving her bound and gagged on the captain’s bed…

He found her at the wrong time…

Known to society as a rascal and reckless privateer, Captain Andrew James Rokesby actually transports essential goods and documents for the British government. Setting sail on a time-sensitive voyage to Portugal, he’s stunned to find a woman waiting for him in his cabin. Surely, his imagination is getting the better of him. But no, she is very real—and his duty to the Crown means he’s stuck with her.

Can two wrongs make the most perfect right?

When Andrew learns that she is a Bridgerton, he knows he will likely have to wed her to avert a scandal—though Poppy has no idea that he is the son of an earl and neighbor to her aristocratic cousins in Kent. On the high seas, their war of words soon gives way to an intoxicating passion. But when Andrew’s secret is revealed, will his declaration of love be enough to capture her heart…?

The Other Miss Bridgerton
by Julia Quinn

Series
A Bridgertons Prequel (Jump to the Series on Amazon)

He motioned with his arm, urging her a few more steps forward. “Careful,” he murmured.
Poppy looked to her toes. The deck came to an abrupt halt in front of her, its elevation dropping by several feet.
The captain hopped down. “The beakhead, my lady,” he said with a gallant wave to the triangular deck that formed the pointy front of the Infinity. He reached up and placed his hands on her hips to help her down.
But when she was steady, he didn’t let go.
“This is as far forward as one can stand on deck,” he told her.
She pointed to a spot a few feet ahead. “What about—”
“As one can stand safely on deck,” he amended. He adjusted their position so that he was standing behind her. “Now close your eyes.”
“But then I can’t see the stars.”
“You can open them later.”
She tilted her head to the left, right, and back again, as if to say, Oh, very well, but she closed her eyes.
“Now tilt your head up. Not all the way, just a bit.”
She did, and maybe it was that motion, or maybe it was just because she’d closed her eyes, but she felt instantly off-balance, as if something far greater than the ocean had stolen her equilibrium.
The captain’s hands tightened on her hips. “What do you feel?” he asked, his lips coming close to her ear.
“The wind.”
“What else?” She swallowed. Licked her lips.
“The salt in the air.”
“What else?”
“The motion, the speed.”
He moved his mouth closer. “What else?”
And then she said the one thing that had been true from the beginning. 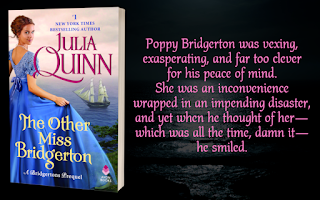 JULIA QUINN started writing her first book one month after finishing college and has been tapping away at her keyboard ever since. The New York Times bestselling author of more than two dozen novels for Avon Books, she is a graduate of Harvard and Radcliffe Colleges and is one of only sixteen authors ever to be inducted in the Romance Writers of America Hall of Fame. She lives in the Pacific Northwest with her family.

This promotion is brought to you by Pure Textuality PR.

By DawnsReadingNook at November 26, 2018