FROM THE DESK OF
DONA PENZA TATTLE, ESQ.
AND
ASSOCIATE WRYE BALDERDASH

Wearing a skirted bathing suit, Tattle appeared with a straw beach hat and a box of tissues. “Ahhhh-chooo!”
“Ut oh, cold?”
“Actually, quite hot. But I’d prefer not to be sneezing while at the seashore.”
“Well, there is only one way to prevent a summer cold.”
“How?”
“Catch it in winter!”
“Ha…ha!” She place her hand on her hip and did an eye roll. “Are we ready?”
“After you change, m’partner-in-book-sleuthing.”
“Huh?”
“Today’s a Love of Literature Leap Review, and let’s just say, we’re not going to the beach but a galaxy far-far away!” 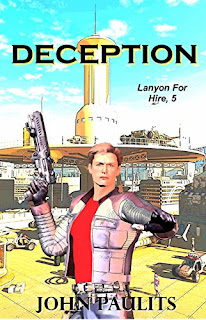 Wrye landed in the first chapter, took off his space helmet and sniffed the air. Concluding it was breathable, he began, “Being for hire has its draw backs, especially for Lanyon, but everyone knew he was the one to call for those impossible tasks. This is especially true considering he begins what appears to be a simple job, follows around an Argonian suspected of enjoying the pleasures of a Vanadian’s wife. In truth, it was the husband who had a dalliance and wanted to justify it. Whee oh! But the Vanadian paid well and included expenses. Quick thinking, dependable Layton does his job.”

“Concurrently,” Tattle waltzed about the books. “Predamor has a job for Layton, recovering a shipment of rators (weapons) from Earth. It’s depicted as easy, but it quickly becomes complex and dangerous. Despite that, his twelve year-old side kick, Jophena, is also on the job.”

“Whatja think?” Tattle grinned. “Why take on another job on the same planet, tracking down the Malcosian Over-minister’s daughter, Meihon. Of course, in both situations, nothing is what it seems, good leads turn bad, bad leads turn horrendous, and Lanyon’s laid back attitude is fully tested.”

“He immediately questions his wisdom in job choices, but as he each problem he attempts to press away creates a new wrinkle. He’s in for a whirlwind of complications and is nearly out of choices. Will he fail? Will he even survive? There is no telling what is up or down when it comes to Lanyon,” Wrye predicted.

Tattle donned her sincere expression. “John Paulits has a smooth, sleek, humorous writing style that keeps drawing you into the plot and keeps you guessing as to what’s true, what’s a led, who’s doing what and where and when! The action is continuous and absorbing. The situations strange and compelling. Nothing seems to connect until it actually does at the end. I couldn’t get enough of this story or the characters. Their quirkiness is enhanced by their depth.”

Wrye is just as earnest but with a depth of enthusiasm. “Encountering Lanyon is like meeting a throw-back to the forties P.I.  Hence, his unique personality placed in a futuristic, far-flung galaxy, inter-species society creates an enjoyable and memorable adventure. The innovative technology and Lanyon’s laid back humor turns the story into a creative romp you won’t want to put down.”

“Though this is the fifth novel in the Lanyon For Hire series, I had no problem just jumping into the story. Past events were presented in the cocoon of present events. However, now I need to find out the intricacies of the previous stories.”

“Whether you enjoy Science Fiction or not, DECEPTION is a great read you won’t want to put down.”

Hope you enjoyed this month’s review. More to come in July!

Created and written by:  Angelica Hart and Zi