Summer of Seduction
An Anthology

These fabulous authors are offering wonderful giveaways. There are Amazon Gift Cert's, ebooks, and a print book of Summer of Seduction up for Grabs. Please use the RaffleCopter below to enter. You may increase your chances of wining by visiting the other tour stops. You may find those locations here.


Talking with the Authors:

Thanks for stopping by to talk a little about your writing! Let's jump right in. When did you begin writing and why?
Thanks for having me here! I started three years ago when a friend dared me to write.

Do certain themes and ideas tend to capture your writer’s imagination and fascinate you?
I go with whatever clicks in my head. It could be something on TV or someone could mention something in passing.

How do you find readers in today's market?
Facebook mainly, but I’m trying to branch out more. Get in touch with readers who don’t go on social media.

Do you come up with the hook first, or do you create characters first and then dig through until you find a hook? Characters come first. It will start with a scene that keeps playing in my head. Like earworm.

What's on the top of your TBR pile right now? I want to read J.F. Silver’s Mr. and Mrs. Average Joe.

Tell me a little about the characters in Kassie’s Surrender.
Kassie always wanted to go to Australia and New Zealand. When she enters a contest with Other World Travel, she couldn’t believe her luck. She meets former Hollywood movie star, Hailey Stewart who’d disappeared years earlier under mysterious circumstances.
What Kassie doesn’t know is that, the cruise is really a transport to the unknown dimension known as Landia and that she is never going back home.

Where’s the story set? How much influence did the setting have on the atmosphere/characters/development of the story?
It is set in the fictional dimension of Landia. Earth has several dimensions, each one unique in its own way.  Landia is a dominant/submissive society. When I started to write this, it was going to be a FF contemporary story, but when I started going over it, it suddenly became a vamp.
I thought of Landia when I saw something that there once was an Atlantis-like island near New Zealand.

If you had to write your memoir in five words, what would you write?
Always Listen to your mother.  (She’d always told me I should be writing but never listened.

How often does your muse distract you from day to day minutiae?
My muse likes to wake me up at 3am.

What do readers have to look forward to in the future from you?
I have Zoe’s Mates coming out soon, just waiting on edits.  Zoe’s Mates was in the Coming in Hot boxed set, and was originally titled Sexual Healing.
I’ve rewritten some of it, and added more scenes.
I also am working on the next in my Scandalous Fairy Tales series called Grandma’s Cottage, a retelling of Red Riding Hood.

"Avoid the burn, but savor the heat of the season! Kick back in the shade with your copy of Nine Hot Authors – Nine Sexy Tales of Summer Sizzle! 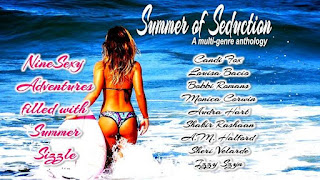 
Candi Fox, co-host of the wildly popular radio show Candi and Company with over 900 thousand listeners began her venture in the paranormal at the tender age of two, when she witnessed her first apparition. From that moment on the paranormal seemed to follow her. No matter where she moved, the house she lived in the house next door, or the house down the street always seemed to be haunted.
She often wondered if she drew the spirits to her. Little did she know that she was indeed a magnet of sorts. It wasn't until she was in her late twenties that she found people who could not only explain her gifts, but would also help her hone them. Armed with this new knowledge she began to openly explore hauntings and other paranormal phenomena.
Growing up in Indiana lent her the opportunity to explore many famous haunted places including the Hannah House, which was once part of the Underground Railroad. A little over two years ago she moved to Tulsa, OK and has began to explore the haunted landscape in a new state.
Candi lives with her husband, and furry children in Tulsa. She is passionate about the occult, saving and rehabilitating horses, horseback riding, magic, all things mystical and has her Reiki Mastery.
She uses her own paranormal experiences as well as her own life traumas to write from a grounded and realistic perspective about subjects that are hard to talk about and even harder to feel for yourself.

Bobbi Romans:
She's a Mom, BamMaw, Aunt and loves to write, cook, and be both crafty and thrifty. Oddities include, marring people and moons ago, being on a talk show. *wink* Bobbi writes a little bit of everything to find her available books, check out her Amazon page. To read reviews of her stories, check out her Goodreads page. To find Bobbi herself she's on Facebook, Twitter, LinkedIn, Goodreads, and had her blog located at, Bobbi Roman's Yakpad! She loves to hear from readers so feel free to drop her a line.


Monica Corwin is a New York Times and USA Today Bestselling author. She is an outspoken writer attempting to make romance accessible to everyone, no matter their preferences. As a Northern Ohioian, Monica enjoys snow drifts, three seasons of weather, and a dislike of Michigan football. Monica owns more books about King Arthur than should be strictly necessary. Also typewriters...lots and lots of typewriters.

If you want up to date information on releases be sure to follow her here on Amazon or you can join her newsletter: http://madmimi.com/signups/267423/join


Audra Hart is a southern gal with plenty of life experience, which has lent itself to a colorful and somewhat naughty imagination. An avid reader from a very young age who enjoys a wide array of genres, Audra truly loves to read and write sexy paranormal romance novels and strives to write romantic tales which are so exciting, so hot and so moving that her readers can gleefully escape their daily concerns while immersed in her fictional universe. As a lifelong fan of the Happily Ever After, Audra strives to give her readers true moments of joy within the pages of her books. The heroines in these stories are always strong and sensual survivors who find themselves bonded to powerful and sexy alpha-male heroes.

If you enjoy paranormal romance loaded with tons of action, in and out of the bedroom, as well as a fresh twist on mythology and folklore, then Audra Hart is the author for you. If you enjoy well developed characters, intricate plots and surprising twists... check out these stories! All of Audra's novels are written to be enjoyed by adults only.

You can always find Audra on FB at: https://www.facebook.com/AudraHartWritesRomance?ref=aymt_homepage_panel
~*~*~*~*~*~

Shakir Rashaan:
Shakir Rashaan is the Bestselling author of In Service to the  Senator, the Nubian Underworld series and the Kink, P.I. Series. His other projects include upcoming releases Unthinkable, The Devil's All-American, and SAMOIS: Book four/ Chronicles of the Nubian Underworld. Other Projects are in development for later publication under P.K. Rashaan. If you want to read more, visit ShakirRashaan.com

A.M. Halford:
A.M. Halford lives in Southern Oregon and enjoys spending as much time outside as she possibly can. Her partner and her often find themselves hiking with their two dogs when the weather permits it. Fishing, camping, and photography are also activities she greatly enjoy. If the weather doesn’t permit going outside she likes to curl up with a sketch book and draw whatever comes to mind.

A.M. Halford got into writing as an outlet for personal therapy and has since expanded that into a hobby and profession that she enjoys. She often writes down anything that comes to mind, combing through the ideas and expanding on plots that sound the most interesting. She likes to write believable relations between people overcoming unfair hardships set before them. She always loves a happy ending and no matter the hell her characters go through they’ll always get their forever person.

Sheri Velarde:
Sheri Velarde lives in New Mexico with her husband and their two dogs
Being an avid reader since an early age, she has wanted to be a writer for as long as she can remember. She has been writing all her life, but only recently started to actually try to pursue her dream of writing for a living. She specializes in all things paranormal and that go bump in the night. Her heart truly lies in exploring unknown worlds or adding the supernatural to our world. If it goes bump in the night or has magical connotations, Sheri writes about it. She writes everything from sweet romances to horror stories sure to scare you.

She is constantly putting out new material with various publishers, so it is best to keep up with her on her website www.authorsherivelarde.weebly.com.
In her spare time Sheri is an artist, jewelry designer, independent comic writer/artist and freelance non-fiction writer. Hiking in the mountains, going to live concerts, art openings, museums, watching movies, playing games, and hosting intimate dinner parties.
Social Links: Website | Facebook | Twitter | Amazon

Izzy Szyn:
New York Times Bestselling Author Izzy Szyn was born in May of 2014 when a friend dared her to write. Born and raised in Detroit, Mi. Izzy now lives in Oklahoma City with her furchild Misty, the friendliest Chihuahua/Terrier you will ever meet. Currently works in a call center, where she writes in between phone calls.

Izzy loves to keep in touch with her readers. Email her at izzyszyn@gmail.com.

a Rafflecopter giveaway
By DawnsReadingNook at August 05, 2017

What a great interview! Thank you so much for sharing :)

Thanks for having us :)