Discover the world of David Burnett's Between Heaven and Hell and don't forget to enter the tour wide giveaway at the end of the post. David will be awarding a $15 Amazon or B/N GC to a randomly drawn winner via rafflecopter during the tour. The tour is sponsored by Goddess Fish Promotions. 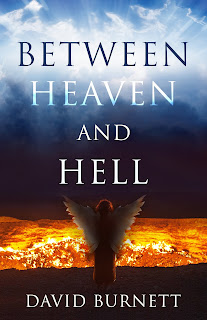 When Adryel follows Lucifer in his rebellion, she loses Ramael, the one she loves, and everything else she holds dear. How can he still love her when, as the Mistress of Hell, she has done more to thwart Adonai’s plan for humanity than all the other fallen angels combined?

Adryel stood on the portico above the Great Gates, looking into . The gates rose almost ten meters above the last step in the Grand Stairway and from her vantage point on the floor above, she could view the crowd that carpeted the open square and spilled onto the steps of the buildings on either side. Banners flew from the towers, trumpeters lined the palace steps, and soldiers stood at parade rest beside the gates, their polished, gold armor sparkling in the light.

The clock in the tower struck, and, as she watched, the procession of the archangels emerged from the tall, gray Chancery building. Led by the chancellor, himself, dressed in the silver robes of his office, it proceeded in a straight line toward the Grand Stairway. Swinging his verge—a long, black, silver-tipped staff—back and forth before him, the chancellor cleared a path for the eight archangels and their aides, all of whom followed in single file.

Uriel, president of the Council of the Archangels, wearing a golden robe trimmed in purple, led the group. Behind him strode Michael, commander of the army. He was accompanied by Ramael, his aide and second in command. Both wore robes of midnight blue. The red sash across Ramael’s chest identified him as the superintendent of the city’s guard, and, seeing Ramael, Adryel smiled. He looked quite handsome.

She started to raise her hand to wave, but thought better of it. He likely would not see her even if she did.

Lucifer, attired in his black academic gown, a reminder that he was dean of the Institute—the angelic college located in the southwest quadrant of Celestial City—strutted across the square as if he owned it, giving the impression that the others, archangels and spectators alike, were present simply because he tolerated them.

Adryel’s heart was pounding. Even though it had been a decade since she had witnessed the parade from the square itself, she could sense the excitement of those who were there today.

Gabriel was clothed in pure, glistening white. Adonai’s messenger, his movements were fluid and graceful, and he seemed to glide over the pavement rather than walk across it like the others. Raphael wore a green robe, Chamuel’s was pink, Jophiel’s, a pale yellow, and Zadkiel was attired in violet. The colors reminded Adryel of the wild flowers in the meadow she passed each morning as she left home.

The procession crept across the square, the archangels’ colorful robes contrasting vividly with the plain white ones of the ordinary angels who moved aside to allow them to pass. From her perch high above, Adryel imagined the line of archangels to be a multicolored caterpillar inching its way through the tufts of a fluffy white towel. She chuckled at the thought. She would have to remember to tell Ramael.

On this day the procession was for a specially convened meeting of the Council of the Archangels—the group that governed the city and the surrounding territories. No one in the square, including the archangels, knew the reason for the meeting, and gossip ran rampant throughout the city.

We recently moved to our new home near . Three of my four books are set in , and I’ve always enjoyed the beaches. I now have the opportunity to walk on the beach almost every day and to photography the ocean, the sea birds, and the marshes that I love.

I love photography, and I have photographed subjects as varied as prehistoric ruins on the islands of , star trails, sea gulls, and a Native American powwow. My wife and I have traveled widely in the and the . During trips to , we visited , the ancestral home of the Burnett family near , and on Barra, the home of my McNeil ancestors.

I went to school for much longer than I want to admit, and I have degrees in psychology and education. In an “earlier life” I was director of research for our state’s education department.


a Rafflecopter giveaway
By DawnsReadingNook at April 03, 2017

Thank you for posting Between Heaven and Hell! It is an account (fictional by necessity!) of an angel caught between the two and the decisions she makes when Lucifer rebels against God. The angelic characters have very human traits and behaviors. Some people find this makes them believable and approachable. Others are bothered by such “humanized” angels. I’d be interested to know what your readers think. I’ll check back early this evening to find out.
David Burnett