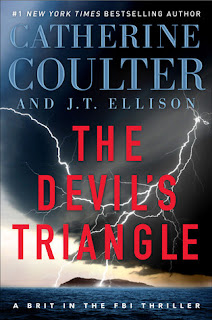 When an obsession turns to murder then its time to call in the big guns at the FBI.

My Rating for The Devil's Triangle: 5 Stars and a Recommended Read


For FBI agents Nicholas Drummond and Michaela Caine, are adjusting to their new roles as head of the FBI’s new Covert Eyes division and setting up their team in their new offices when Nicholas receives a call from the elusive and master thief, the fox, telling him that a job went south and now she needs his and Mike’s help in solving who wants her dead. As Kitsune tells them about a recent weather event that may not be natural, Nicholas and the rest of the covert eyes team race to Italy to see if they can help Kitsune (the fox) and figure out just who wants to kill her and why. But as bullets start to fly, allies that they count on turn to enemies, Nicholas, Mike and the rest of the team find out that obsession can take over not just one person, but a whole family. Now the question is will their first case as a covert eyes team be their last one?

Wow, just wow. These two stellar authors come together to deliver a pulse pounding, wild action packed ride from start to finish in their latest installment in the acclaimed Brit in the FBI series and delivers a high octane ride that will keep the reader glued to the pages till the very end. With twists and turns that you don’t see coming to some intriguing characters that leap off the pages, these two authors give the reader an exciting and engrossing story that hit all my love buttons in all the right ways.

First the story was fast paced and kept my attention even after I had to put it down to go back to work. It was action packed and the few twists left me reeling even as I flipped the pages to see what would happen next. Second, the characters were just amazing. I love how these two authors are able to meld their writing styles together and into a cohesive story that featured intriguing and well written characters that fairly leap off the pages. With each astonishing action scene after another, the authors keep the reader centered on the characters and man, these characters really are in your face and totally entertaining. I love how close Nicholas and Mike have gotten and their connection comes across really well here. Add in their great team members as well as the bad guys who can really chill you to the bone in this book, well you get a sense that if this actually happened in real life, it would be cataclysmic and dangerous to the world.

THE DEVIL’S TRIANGLE keeps the reader highly entertained, eager for more and I absolutely adored finding out more about Nicholas, Mike and everyone else on their team. Add in some scenes with some of Ms. Coulter’s FBI series characters and it adds in depth to the story at the right times. With an action packed story that will blow you away, the reader is taken on a ride of their life as the question is asked: Those who can control the weather, should they rule the world? The answer will be found in this latest in book by two masterful storytellers that will chill you to the bone. Now the question I have to ask these two authors-More please!

A Brit in the FBI Series:

Find The Devil's Triangle at Amazon
By DawnsReadingNook at March 14, 2017