Discover the world of Jessica Jefferson's Second Chance Marquess and get ready to be enthralled. Don't forget to enter the giveaway at the end of the post. The author is offering a $25 and $50 amazon of bn gift card to two winners. 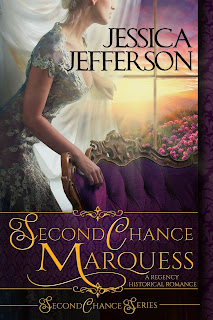 When Wilhemina Turner’s younger sister runs off with a young Lothario, she has no choice but to turn to the notorious rake who broke his promise and her heart, for assistance. George Bartlett, the Marquess of Chesterton, hasn’t forgotten the woman who hurt him so many years ago, but can’t deny her request, knowing that his brother’s reputation, and fortune, is at risk. A series of misfortunes leave the straight-laced widow and committed bachelor stranded, sharing both close quarters and old secrets. But when morning comes, will this unlikely pair find a second chance at love?

“Fine.” He looked away first, turning his attention back to the items he’d collected upon his desk. “If you want to join me, then you may.”

She squared her shoulders and stood a bit straighter having won their duel of wills. “Good.”

Without another word or a single glance, Chesterton left the room.

Not one to be left behind, Wilhelmina hurried after him, through the study and up the stairs.

“Where are we going?” she asked once they’d reached the top, breathless from the burst of activity.

He strode down the corridor, seemingly unaffected by the brisk climb. “To my bedroom.”

She immediately stopped. “Your bedroom? Why ever would we go in there?”

Chesterton turned back to her, one sardonic eyebrow arched high. “To change,” he answered. “You didn’t expect me to head out in this, did you?” He turned and continued toward the room, looking back at her before entering. “Are you coming?” he asked, voice smooth as warm chocolate.

This wasn’t the first time she’d been lured into George’s bedroom. He’d been an earl, the courtesy title bestowed upon him at birth, but more than that, he’d been a gentleman. Apparently, he’d lost that when he’d inherited the Marquisate. His bedroom was no longer an inviting sanctuary, and this invitation was not one of love as it had once been, but a lewd proposition, tenderness replaced by cruelty, as he watched expectantly for her reaction.

“I don’t think that’ll be necessary,” she stuttered, trying in vain to remain calm and collected as he started to untie the sash about his waist holding his robe closed. He let it fall to the ground and the robe opened, revealing his chest and torso in all its naked glory.

And it was indeed glorious.

She quickly averted her glance, whipping her head around and staring attentively at the painting on the wall.

“Is something the matter, Mrs. Turner?”

She was not about to play this game. She didn’t have the time, and he didn’t deserve the enjoyment it would undoubtedly bring him to see her suffer so. And most importantly, she couldn’t play because she knew good and well that she had no chance of winning.

Jessica Jefferson makes her home in Almost-Chicago with her husband, two young daughters, French bulldog Lulu, and English bulldog Pete.  When she's not busy trying to find middle-ground between being a modern career woman and Suzy-Homemaker, she loves to watch "Real Housewives of [insert city here]" and performing unnecessary improvements to her home and property.

Jessica writes Regency-era historical romance with a modern twist where she invites her readers to fall in love with romance again.

Jessica will be awarding a $25 and a $50 Amazon or B/N GC to two randomly drawn winners via rafflecopter during the tour.


a Rafflecopter giveaway
By DawnsReadingNook at March 22, 2017

I love the cover. This is definitely one I'm. going to read!

Thanks so much for hosting. This is one of my favorite covers!