Discover Edge of Yesterday and Enter the Giveaway

From USA Today & Internationally Bestselling Authors
Sue-Ellen Welfonder and Tarah Scott
In a place beyond rules,
daring is power,
and love is the greatest threat of all... 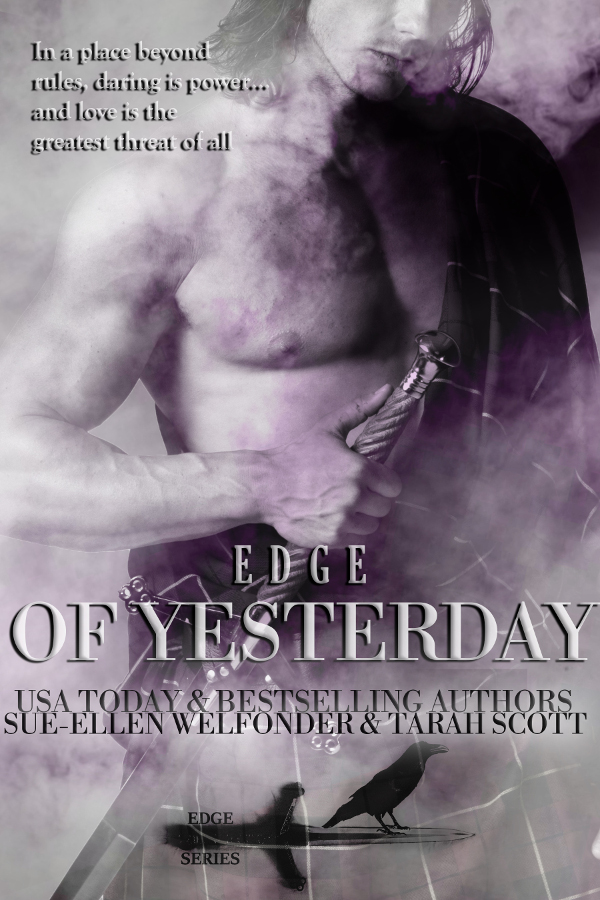 EDGE OF YESTERDAY
Sue-Ellen Welfonder and Tarah Scott
Genre: Historical Romance, Time Travel
Series: Edge Series, Book 1
Publisher: Broken Arm Publishing
Publication Date: December 27, 2016
Add to Goodreads
Two of Scottish romance’s most loved authors have joined pens to write a thrilling new time travel series filled with passion, danger, and intrigue. These never-before-published novels will sweep you to Scotland’s Highland Heatheredge, where magic is real, time is relevant, and there is no escape from desire…
Men are disappearing in the Highland crofting village of Heatheredge. The authorities suspect foul play, but without signs of violence—or bodies—they can’t prove a thing.
World champion swordsman Cailean Ross is living the fantasy of a lifetime as the victor of Heatheredge’s medieval reenactment Gathering. But when the fantasy turns into reality, swordplay becomes a fight to the death and he finds himself among the ‘missing’ statistics.
Julianna Mackay flees a man she fears is an evil wizard and literally runs into handsome Cailean Ross. Cailean defends Lady Julianna from her attackers. Together, they set out in search of the key to a six-hundred-year-old curse that can only be broken in medieval Scotland.
When the veil of time is lifted, Cailean and Julianna find that love may not be enough to save them or those they hold dear.

SEW:  In EDGE OF YESTERDAY, Cailean is astounded when Julianna uses a medicinal pocan cheann (bag of heads) to tend his wounds. The heads were those of an adder, a toad, and a newt. The authors did not make this up. Pocan cheanns were used by dipping the bag into a boundary stream and then applying the water that dripped from the bag to a wound. The practice existed in the medieval Highlands and Isles and into the 20th century.

SEW:  Heatheredge and most other locations in EDGE OF YESTERDAY are fictitious, but all are based on actual places. One real location is Cailean’s hometown, Cumbernauld in Scotland’s Central Belt. The name means ‘meeting of the burns’ and, in distant times, was spelled as Cumyrnald. Cailean uses this version when speaking to medievals as he knows they would not know the town by its modern name. Many places in Scotland bore entirely different names in medieval days.
TS: I use Dragon recognition voice software, affectionately known to Sue-Ellen and me as ‘the dragon.’ Why? Because the software, despite being state of the art, creates some pretty funny bloopers. For ‘wanton woman’ the dragon wrote ‘wonton woman.’ (Chinese, anyone?) One particularly funny blooper reads: ‘His eyes dropped to the thatch of golden curls between her lips.’ Needless to say, ‘lips’ was supposed to be ‘legs.’

TS: Something I thought was really funny was our growing interest in Crows. I didn’t know it, but crows are exceptionally intelligent. Research shows that they are able to problem solve a two part problem. For example, a treat was placed in a narrow box with a glass front. The crow could see the treat. A short stick lay on the floor of the crow’s cage. The crow had to take that stick, use it to get another longer stick from inside another narrow box, then take that longer stick to maneuver the treat out of its box. Researchers were amazed that the crow understood that it had to use the shorter stick to get to the longer stick. Another interesting fact about crows is that they recognize faces and will warn their comrades about a face they recognize that they fear.

TS: A fun fact—for me, at any rate—was the theories of time travel and alternate universes that Cailean considered when he tried to figure out where he was. With no signs of modern life, not so much an electrical outlet, a road sign, or an airplane in the sky, Cailean quickly realized that things weren’t as they should be. He’s no scientist. In fact, Cailean is an engineering professor. But he liked to watch science fiction movies and he’d read some of the classic sci fi authors, so he was familiar with the pop culture idea of time travel. None of that prepared him for the reality of fourteenth century Scotland.

When she’d finished, she stood and brushed down her skirts. “Can ye rise?”
He pulled his shirt on, buttoned two buttons, then slowly pushed to his feet. Julianna kept her gaze locked with his, lifting her head as he stood at full height. She suppressed an urge to laugh when he grinned as if proud of himself.
Julianna shook her head. “Ye need rest. Lie down for a while.”
He glanced at the narrow, plaid-covered bed in the corner, then started to turn that direction.
“Wait.” She grasped his sword belt and began unbuckling it. To her horror her knuckles brushed the flesh of his belly.
He stilled. “If ye wanted to play, lass, all you had to do was ask.”
The teasing note in his voice emphasized his soft burr and she startled at the butterflies that skittered across the insides of her stomach. This isn’t the first time she’d seen a man in a state of undress, though it was the first time she’d seen a man like him in a state of undress. Julianna unhooked the buckle from the loop, then released a silent sigh of relief when she grasped the sheathed sword and stepped away from his disturbing closeness.
“If you would like to take my kilt, as well, ye are welcome to it.” He winked. 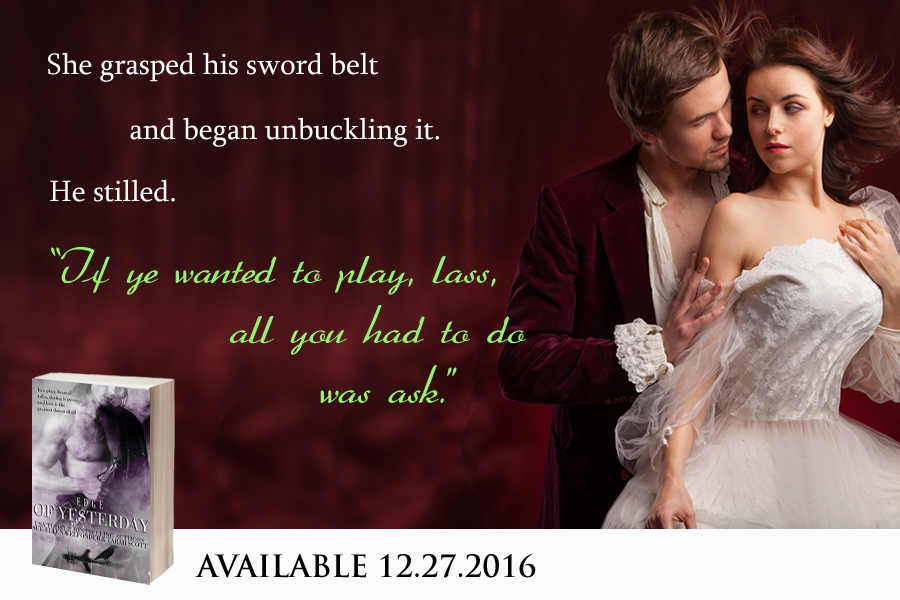 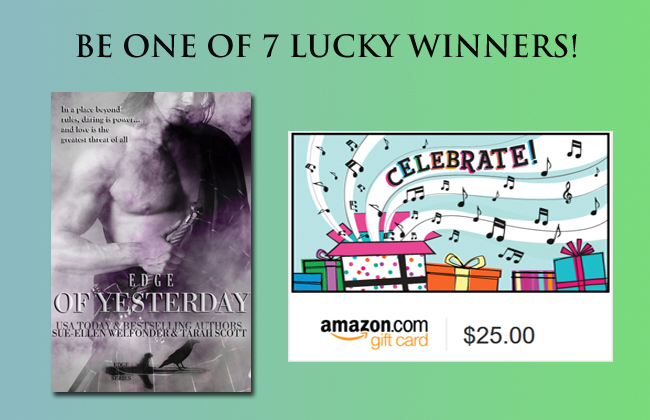 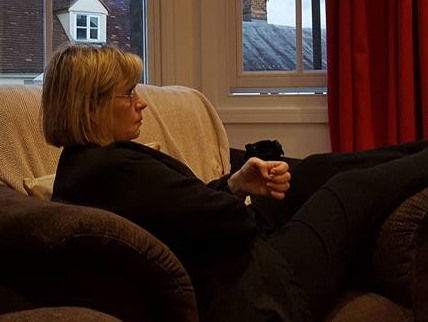 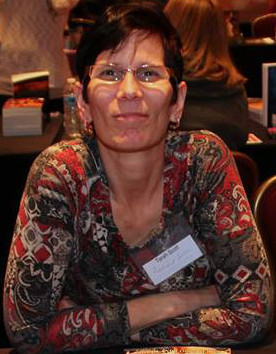 USA Today and Internationally bestselling authors Sue-Ellen Welfonder and Tarah Scott have more in common than friendship. For many years, they’ve both enjoyed spending their working hours in a world of romance and adventure, bringing handsome Highlanders and their ladies to life. Now they’ve joined pens, deciding that when it comes to happily-ever-afters, two writers can stir up even more danger and desire for the characters they love. The EDGE series, Scottish time travel romances, is their first co-authored project, and launches Dec. 27th with EDGE OF YESTERDAY.
Visit the author's official websites
Sue-Ellen Welfonder: http://www.welfonder.com/
Tarah Scott: http://www.tarahscott.com/
Follow the authors on social media
Sue-Ellen Welfonder: Facebook | Twitter
Tarah Scott: Facebook | Twitter

Follow the book tour. Ongoing till February 11, 2017.
Get tidbits, excerpts and other interesting, never before published articles about the book. Click here for the latest tour schedule.

By DawnsReadingNook at February 01, 2017