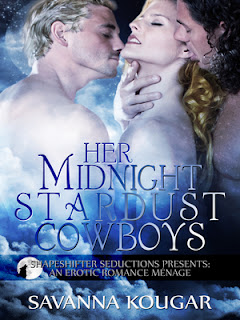 Sherilyn hides out on her small ranch near the odd town of Talbot Peak, Montana, determined to save her prize horses from being stolen. She has no time for men. Besides she's been down that heartbreak road one too many times. The hitch: she didn't bargain on two shapeshifter cowboys who decide she belongs to them.

Zance, a timber wolf shifter, and Dontoya, a rare black cougar shifter, are longtime pardners. Having built up their immense ranch in the supernaturals community, they've settled into a cattleman's lifestyle. Now they've finally found the one woman they both want as their mate.

Sherilyn almost believed she dreamed. Dontoya thrust inside her pussy, his cock so powerful, she shivered inside. Never had she felt so much like a woman.

He forced her pussy walls to stretch, to take his thick cock as he tenderly plunged deeper. Sherilyn had never enjoyed sex more.

She keened moans of pure pleasure as Dontoya possessed her with a dominance natural to him--obvious in every move he made, obvious in the languid prowess of his body against hers.

Never had she wanted to give herself more to a man.

Dontoya not only took her with his big bold cock, but handled her with care, both emotionally and physically. Her heart swelled with gratitude, and Sherilyn hoped like hell he would continue caring for her this way.

Dontoya, she sang inside her mind. God help her, but the feel of his fine, fine ass was driving her insane with lust. She undulated, matching his slow primal strikes inside her.

"Easy, darlin'," he hoarsely whispered. "Let me do the work this time."

Surprised, Sherilyn slitted her eyes. His smoke-hot gaze met hers, then devoured her face as if he'd found some sort of long-sought heaven.

With a strong thrust of his cock, he pinned her to the bed. "Give me your wrists."

Sherilyn shuddered inside at his command, one that promised more pleasure. He caressed his palms from her head, and she relinquished his perfectly sculpted ass.

After raising her hands high above her head, Dontoya slid his work-calloused hands along her arms. Damn, but he turned her on--got her juices flowing faster than light speed.

He anchored himself on his elbows, and circled his thumbpads on the sensitive skin of her wrists. Sherilyn heaved ragged breaths. Her pussy convulsively clenched his cock, or tried. With his size, she wondered if he felt the small spasms.

As he lowered his head, his gaze scorched her. She trembled when his mouth brushed over hers. He nibbled slow kisses on her lips, the corners, the bottom fullness of her mouth--along the curve of her upper lip.

God, she loved it.

Even as Sherilyn marveled at his endurance as a lover, Dontoya captured both of her wrists in one hand. He forced her arms higher, his claim primitive. His claim obvious.

At the same time, the searing heat of his lips sparked sensations through her. His *take all the time in the world* kisses sensually tortured more than her mouth.

No, she sizzled down to her belly, all while his buried cock kept her wild with need. He tightened his grip on her wrists, and her clit jerked.

The jolt of near-pain pleasure was unexpected, and Sherilyn quaked inside. Never had she imagined this delicious intensity, not in her wildest fantasies.

"Dontoya," escaped on the rush of her breath, once his lips hovered above hers.

Baby boomer and redhead, I've always danced to the beat of a different drum. I live on the tame prairie in the Midwest with my beloved pets. My interests have always been eclectic, and anything creative. As well, my over-active imagination has played a huge role in my life, and I've been writing romance stories since age thirteen.

Most of all, I love my heroines and heroes. I love writing their stories, the various unique worlds they inhabit, and their action-adventures together.