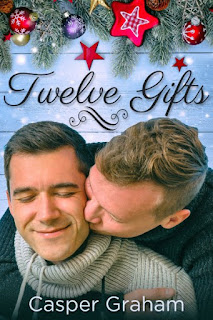 Please welcome author Casper Graham who drops in today to chat with me about their new book, Twelve Gifts.


Thanks for stopping by to talk a little about your writing! Let's jump right in. When did you begin writing and why?
-Thank you for having me. I really appreciate it.
-I have always enjoyed reading. It was my refuge from all of the things that had plagued me way back then. When I was in elementary school, I had come to discover that writing was really therapeutic. I could write down (I didn’t have a laptop or typewriter at that age) all of the things that I felt and it gave me the opportunity to work things out quietly all by myself. As I was growing up, I tried writing poetry. Unfortunately, all of my poems had already been rejected. *laugh*

Do you have a favorite genre? Is it the same genre you prefer to write?
-I don’t really have a favorite genre. Wait, does pornography count as a genre? *wink* *laugh* Anyway, on a more serious note, I had initially begun writing poetry and non-fiction stuff, but I somehow felt that they were constricting me. Probably because I have all of these stories inside my head that just don’t seem to fit as either a poem or a non-fiction. Then, I wrote romance, but I couldn’t write heterosexual romances. I mean, I could have, but it felt…disconnected to me. I honestly find it easier to write M/M romance because I can sort of rely on my own experiences up to a certain extent. Thus, that’s how I get into the erotic romance writing.

How do you balance long-term thinking vs. being nimble in today's market?
I always keep an open mind. Long-term thinking and being nimble are very difficult to navigate because there is such a fine line between them. On the one hand, an author needs to know what sells in today’s market. On the other hand, he/she needs to be careful not to be pigeonholed as a “paranormal writer,” a “menage writer,” a “historical romance writer,” or even a “M/M writer” only. That is one of the reasons why I’m still writing poetry and non-fiction in spite of my utter lack of success in those areas. *laugh*

Do you come up with the hook first, or do you create characters first and then dig through until you find a hook?
I generally come up with a hook first. Then I will start to work from there, expanding the story as much as possible. However, some stories just can’t seem to expand beyond 12,000 or 20,000 words. I really dislike expanding on a story for the sake of the word count because I always feel like the story line can quickly veer off towards an unwanted path.

How do you create your characters?
I like my characters to be as “human” as possible. Even when writing paranormal romances, my characters tend to have their humanity intact. Maybe that’s why I can’t seem to write a good Fantasy/Science Fiction story. *laugh*

What's on the top of your TBR pile right now?
Goodness! I have so many of them that they are piling up on my reading devices. *Don’t give me those judging eyebrows* I always seem to have tons and tons of things that interest me. Most of them are romances though. *laugh*

Tell me a little about the characters in Twelve Gifts.
There are two main characters: Dylan Hughes and Aaron Tyler. Dylan Hughes is a sweetheart and he loves baking, which is very important because he owns a bakery. He doesn’t have much luck when it comes to relationship though. Aaron Tyler is a take-charge kind of man. He is a romantic and he goes after what he wants. However, beneath the confidence, he has his own insecurities.

Where’s the story set? How much influence did the setting have on the atmosphere/characters/development of the story?
I set the story somewhere in the western hemisphere of the globe. I actually wrote the story back in August while listening to a ton of Christmas songs. *laugh* I really miss the winter season. Since winter doesn’t exist where I’m living presently, I have to live vicariously through my characters.

If you had to write your memoir in five words, what would you write?
Only five words? Hmm… It might go something like, “Write what you believe in.”

How often does your muse distract you from day to day minutiae?
Oh, where do I start? *laugh* My boyfriend sometimes felt neglected by me once I have begun writing. Then, there were those times when I would take out my phone and type out the ideas forming inside my head while grocery shopping or eating with my cubby hubby - I call my boyfriend “cubby hubby” while he calls me “chunky hubby.” Go figure! *laugh*

I’m currently trying to write a M/M romance that is a mixture of assassin and magic. Plus, there is a M/M/M romance that may not suit everyone’s taste because two of the characters are actually step siblings and the story may be a little darker than what I have written in the past. I’m also writing a M/M romance that is something along the line of marriage by contract.

I am determined to keep on writing as long as people are still interested in me. *laugh* We’ll see how it goes in the future.

Dylan Hughes owns a small bakery. He's doing what he loves and business is good, but he's lonely. After a bad relationship, he's been keeping to himself, and things are worse during the Christmas season. Then there is his unrequited crush on Aaron Tyler.

Aaron is a successful event planner. He and Dylan met more than two years earlier and, after tasting Dylan's baking, Aaron proposed a collaboration. They've worked together ever since. Not willing to risk their friendship, Dylan has kept his feelings under wraps.

But a secret admirer begins to send Dylan thoughtful gifts twelve days before Christmas. The cute, clever gifts keep on coming and he's flattered, but they couldn't have come at a worse time. Aaron has finally asked him out.

What happens when the secret admirer’s identity is revealed on Christmas Day? Will Dylan's blossoming relationship with Aaron survive?

Note: may contain sexually explicit scenes of a homoerotic nature.

He had just finished arranging everything neatly when the bell tinkled, signaling that there was a customer in the bakery. He stood up to greet the customer, but the words died in his throat. There were eleven people lined up in one neat row in front of the counter. Each person was holding a flute.

“Are you Dylan Hughes?” an elderly woman asked. He nodded in confusion. He bet that this would be another bizarre afternoon. “Okay, people. On the count of three. One, two, three.”

He could only gape openly at the weirdness of this entire situation. He knew the song that they were playing though. It was “O Come, All Ye Faithful.” He hummed along to the melody and enjoyed himself thoroughly. He totally believed in the saying, “If you can’t beat them, join them.” He might as well enjoy this free entertainment.

Like the day before, passers-by were lured into the bakery by the music. They all clapped loudly when the last note died down. That was when he noticed Aaron standing by the door, grinning widely at him. He waved at the man, who was now walking towards him.

“I don’t ...” He was surprised when Aaron’s finger pointed at an envelope on the counter. One of the eleven performers must have left it there for him when the performance was over.

“Read it, Dylan. I’ll take care of the performers. Besides, you have hungry customers to deal with.”

He agreed gratefully. There were not as many people today as the day before and he was done in less than twenty minutes. He then packed up Aaron’s usual favorites and handed the boxes to him.

“How much do I owe you, Aaron? I presume that you have paid the performers for two days in a row now or at least tipped them well.”

“Don’t worry about it.” Aaron shrugged it off and instead handed over his credit card to pay for his purchases.

“On the house, Aaron. You’ve helped me out twice and you’ve given me plenty of repeat customers, who in turn introduce my bakery to many more.”

“Alright then. Thanks, Dylan.”

Dylan was confused for a second before understanding dawned on him. Aaron had referred to the message within the envelope.

He took out another postcard from within the envelope and admired the picture of eleven bagpipes on it before reading aloud the message on the other side.

It is ten days before Christmas,
I hope you’ve enjoyed the flutists,
Sad that I cannot find eleven bagpipe players ...
From,
Your secret admirer

“So nothing,” Dylan insisted. “It’s nice to have a secret admirer, but I’m dating you.”

Dylan smiled at the other man and leaned in for a brief, sweet kiss. He wished he could spend all his waking hours locking lips with Aaron, who had turned out to be an amazing kisser, but he had bills to pay.

“Dinner at my place? I can bake a mean lasagna.”

“Sounds good, Dylan. I can be here by half-past six. My building is next to yours, but I have some last-minute things to take care of.”

They said their goodbyes after sharing another gentle kiss. Dylan watched the other man walking out of the bakery before making his way into the kitchen. He might as well get started on dinner preparation.

He still remembered his first meeting with Aaron. His bakery had been open for business for slightly more than a year when the gorgeous, athletic man walked in. He sold almost every type of items available that day. The next day, Aaron had returned and proposed that they work together. As an event planner, the other man needed not only a reliable baker, but one who could bake delicious pastries. They hashed out the details that same day. It was one of the best business decisions he had ever made.

Casper Graham is an aspiring writer. Writing is a passion. He believes that inspirations can come in all sorts of formats. Sometimes it hits at the most unexpected moment. In his spare time, he also loves to read, listen to music or watch a movie. He is currently in a relationship with the most amazing man and they hope to get married someday.

By DawnsReadingNook at December 23, 2016