Discover the world of Dianne Hartsock and make sure to enter the giveaway at the end of the post. Dianne will be awarding a $25 Amazon or B/N GC to a randomly drawn winner via rafflecopter during the tour. The tour is sponsored by Goddess Fish Promotions. 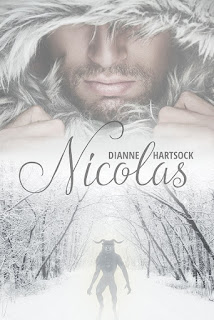 Betrayed by a lover, Jamie rents an isolated cabin on , wanting only to be left alone. Instead, he is pulled from his solitary existence as an artist and tumbles headlong into the legend of Saint Nicolas.

As a young man, Nicolas accidentally killed a man intent on murdering three children, only to have the man’s malicious spirit rise up against him. Fleeing through the centuries from the Krampus, the evil troll-like creature that dogs his steps, Nico finds refuge with the young artist who takes him into his home and bed. But Jamie has questions. Who is Nicolas, and why does the Krampus want to destroy him?

When the Krampus begins to torment and torture anyone Nico comes in contact with to punish him, Jamie’s life is put in danger. And Jamie isn’t sure whether he can help Nico defeat his nemesis or if he’s merely a pawn in the Krampus’s game.

Nico drew a sharp breath as he and Jamie came up behind him.

Piter looked up from the couch where he sat opposite Anna MaGee. Jamie shoved his hands in his pockets, fighting an overwhelming urge to slap the wide grin that spread over his lovely face. “Nico! You came. And, Jamie dear, come sit by me.” He patted the cushion next to him, his eyes dancing as if he read Jamie’s mind and was amused.

Anna’s blue eyes widened at his rough tone, but she stood and hurried over to him. “Andy’s in the family room. What’s the matter?”

“I’ll tell you in a second.” John took her hand and urged her down the hallway, presumably to the back of the house. Piter’s soft laughter slithered along Jamie’s spine in the silence that occupied the living room when they’d gone.

Nico made an impatient sound and Piter waved him closer. “Come, Nico, I didn’t hurt the boy. Not yet, anyway, but that’s entirely up to you. Come sit down. We have a lot to discuss.”

Nico lowered his brows. “I think we should leave here. Talk somewhere else—”

Nico jumped at the command and Jamie shot him a glance. Fury marred his face, but Nico walked to one of the chairs facing the couch. Jamie followed, heading for the chair next to Nico, but Piter’s hand shot out and grabbed Jamie’s wrist, tugging him onto his lap.

Jamie struggled up, but an arm like a vise clamped around his shoulders, holding him in place. He jerked his head to the side, and Piter’s lush lips missed his, grazed his cheek, and then burrowed against his neck. He squirmed when Piter’s tongue licked his skin. Piter raised his head and snared Jamie in his green gaze. His warm breath on Jamie’s cheek made him shiver, anticipating a kiss. Piter grinned and plucked the hat from Jamie’s head with his free hand.

“That’s better, my beauty. Never hide your glorious hair from me.”

Jamie struggled, but Piter captured his lips, his tongue sliding into Jamie’s mouth dripping honey and heat, drowning his protests in sudden need. Piter’s free hand slid down his arm and under his coat, grazing his stomach. Jamie’s muscled clenched, and he twisted his head, breaking the devastating kiss. He threw a desperate glance at Nico.

“Nico….” His voice trailed off. The man’s attention seemed focused on the Christmas tree against the wall. If anything, he seemed more bored than upset with what they were doing. Confusion swept through Jamie, knowing he was a fool for feeling hurt, but didn’t Nico care at all?

“You see, my pretty Jamie, Nico doesn’t want you. He’s cold. Not like me.” 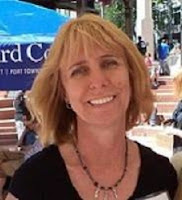 Dianne grew up in one of the older homes in the middle of , a place of hardwood floors and secret closets and back staircases. A house where ghosts lurk in the basement and the faces in the paintings watch you walk up the front stairs. Rooms where you keep the closet doors closed tight at night. It’s where her love of the mysterious and wonderful came from. Dianne is the author of paranormal/suspense, fantasy adventure, m/m romance, and anything else that comes to mind.

She now lives in the beautiful Willamette Valley of Oregon with her incredibly patient husband, who puts up with the endless hours she spends hunched over the keyboard letting her characters play. Dianne says ’s raindrops are the perfect setting in which to write. There’s something about being cooped up in the house with a fire crackling on the hearth and a cup of hot coffee in her hands, which kindles her imagination.


a Rafflecopter giveaway
By DawnsReadingNook at December 13, 2016

Congrats on the tour, I enjoyed the excerpt, and thanks for the chance to win :)

Hi Lisa! So glad you're enjoying the tour. :)

Thank you so much Dawn for hosting me today!

What is the best book that you have read recently? Thanks for the giveaway. I hope that I win.

Glad you made it by Joseph!

Great excerpt, thanks for sharing:)

Great blurb, and the excerpt stressed me out! :)

Glad you enjoyed it Victoria! Thanks for stopping in. :)

Didn't mean to stress you out, Terri! That was Krampus's fault. :)