Tour Stop and Giveaways~ Her Hopes and Dreams by Terri Osburn

We are extremely delighted to join the BOOK TOUR of
HER HOPES AND DREAMS
by
Terri Osburn
Sweet. Heartwarming.
Book 4 of the highly popular Ardent Springs series.
Purchase Links:
Amazon Kindle | Amazon Print | Barnes & Noble
Join the book tour! Get more tidbits, excerpts and other info on Her Hopes and Dreams. Visit all the tour stops for a chances to win $5 Amazon Gift Card on each stop.

Genre: Contemporary Romance
Publication Date: November 15, 2016
Add to Goodreads
If she'd let him in,
he'd be the man of her dreams.
As a newly single mother, Carrie Farmer isn’t quite ready to jump back into the dating pool in Ardent Springs—especially since her last marriage was such a disaster. But if anyone could entice her to wade in a bit, it would be her hunky neighbor, Noah Winchester. He’s the perfect man: strong, protective, and smoking hot. But her eyes have deceived her before, and she’s no longer willing to hand over her heart so easily.
After completing several tours in the Middle East, Noah returns to his hometown a very different man. The former soldier’s plan to rest and relax is soon waylaid by the intriguing woman next door and her heart-stealing little girl. Something—or someone—put shadows in Carrie’s lovely eyes, and he’s determined to clear them away. But when hidden demons can no longer be ignored, the couple gets a reminder from an unexpected source that love truly can conquer all.
BUY NOW!
Get your copy of Her Hopes and Dreams today.
Available at:
Amazon Kindle | Amazon Print | Barnes & Noble

“Hey there,” she said as Noah stepped out last. “Can I talk to you a minute?”
Understandably hesitant, he waved off the other workers. “You guys go ahead. I’ll catch up.” To Carrie he said, “Does Mike need something?”
Considering they hadn’t seen each other since the night in the barn, he could have at least asked how she was. Or if Molly was okay.
“No, I’m not here on business. I have something for you.” She leaned into the car and lifted a beige tote from the passenger seat. “These are for you.”
Noah took the bag and spread the handles to peer inside. “Books?”
“Special books,” she said. “They’re on post-traumatic stress disorder.”
“You brought me PTSD books?” he asked, sounding more annoyed than grateful.
“I thought they might help.”
“Do you think there’s anything about this shit that I don’t know?” Noah shoved the bag at her chest. “I don’t need your damn books.”
Carrie grabbed the tote before it dropped to the ground. “Noah, I didn’t mean to offend you.”
Lowering his voice, he growled, “I’m not one of your battered women looking for a way out. My demons live inside my head.” He tapped twice on his temple. “No book is going to change that.”
“But there are ways to cope—”
“There are pills to take that turn you into a zombie. There are group meetings that remind you how pathetic you are. And there are doctors who don’t know what the hell they’re talking about or how to fix any­thing. Cope?” he snarled. “Try surviving one night with this noise in your head and we’ll talk about coping.”
Noah turned away, kicking up dust in his wake. Carrie stared after him, too stunned to speak, but before he reached his bike, she found her voice.
“Who do you think you are?” she asked, stomping across the gravel. “Do you think you’re the only person living with demons? The only one fighting off memories and anxiety that steals your breath along with any inkling of peace? I live with that every day.”
“Please,” he said, reaching for his helmet. “You don’t have a clue what this is like.”
“Don’t you dare dismiss me, Noah Winchester. Don’t you dare tell me what I do and do not know.”
“Fine,” he said, turning to face her. “What do you know about trauma? What happened to you that makes you think you know any­thing about what I have?”
Simmering, she met his glare with one of her own. “I spent five years being beaten by my husband. Five years never knowing when the next punch would come. The next kick. The next neck-jerking tug on my hair. I became an expert at covering bruises with makeup so no one would know. I concocted an endless supply of excuses for why he did what he did. Why I deserved to be punished and how he didn’t really mean to hurt me.” Throwing the books at his feet, she said, “That’s how I know about trauma. That’s why I understood when you turned on me the other night. That’s why I applied extra foundation to my neck every day since, to cover the mark you left there.”
“Is that why you cheated on your first husband?” he asked. “Because he beat you?”
Amazed by his endless belief in a man who didn’t deserve it, she said, “No. My first husband never touched me in anger. The man I was stupid enough to leave him for did. Do what you want with the books.”
Holding the tears at bay, she walked away with her head held high. Carrie had never voiced any of the things she’d just said to Noah. Not to Lorelei. Not to anyone. The confession left her hollow, raw, and exposed. Now someone knew her secret. The whole ugly truth. And she felt as if she’d been battered all over again.
Without sparing Noah another glance, she got in her car and left him behind. Less than a mile later, she could no longer see the road. Finding a narrow dirt lane, she pulled off and cried until she couldn’t breathe. The sobs racked her chest and left her lungs aching. By the time she regained control, the pressure and pain behind her eyes were nearly unbearable. Grabbing her phone, she sent Mike a text.
Not feeling good. Girl problems. I’m going home.
The lie would keep him from calling or checking on her. Though, ironically, it wasn’t a lie at all.

Other Books in the Ardent Springs Series

Check out other highly recommended titles by Terri Osburn.
Here are her first 3 books in the Ardent Springs series.

Enter my contest for the amazon giveaway below. The contest ends November 30th and is open internationally.
a Rafflecopter giveaway

TOUR
One Lucky Winner will bring home
A Red Kindle Fire,
4 signed Ardent Series Books in a I-Love-Romance-Novels tote
and more!
(Open to US and Canadian residents only) 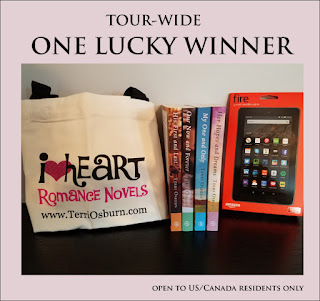 Purchase Her Hopes and Dreams today! 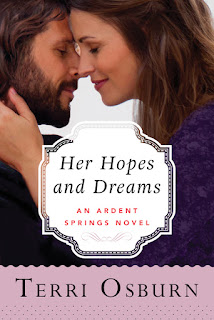 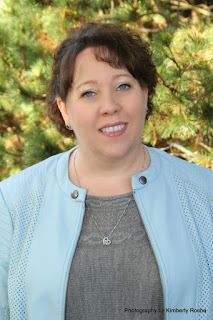 Although born in the , Terri Osburn found her true home between the covers of her favorite books. Classics like The Wizard of Oz and Little Women filled her childhood landscapes, and the romance genre beckoned during her teen years. In 2007, she put pen to paper to write her own. Just five years later, she became a 2012 finalist for the Romance Writers of America Golden Heart Award, and her debut novel was released a year later. To date, she has released eight novels, two novellas, and one short story. You can learn more about this award winning author by visiting her website at www.terriosburn.com.
Visit the official website of Terri Osburn
http://www.TerriOsburn.com
Connect with Terri Osburn on social media:
Facebook | Twitter | Goodreads

Join the book tour! Get more tidbits, excerpts and other info on Her Hopes and Dreams. Visit all the tour stops for a chances to win $5 Amazon Gift Card on each stop.

Romancing the Books and More - Interview

Romantic Reads and Such - Review, Excerpt

Random Thoughts From a Book Nerd - Promo, Excerpt
In partnership with

By DawnsReadingNook at November 23, 2016

Thank you for the excerpt, I've been following the blog tour and it really draws me to want to start reading (if only I could rearrange the TBR queueing it'd be soon, lo!).

I have enjoyed every Terri Osburn book I have read!

thanks for taking part it this.. love her books and this is a blast

This one looks interesting. I need to checkmit out.