Discover The Woven Ring and Enter the Giveaway

Enter the world of M.D. Presley's The Woven Ring and don't forget to enter the giveaway at the end of the post. The author is awarding a randomly drawn commenter a handcrafted silver ring. The book blast tour is sponsored by Goddess Fish Promotions. 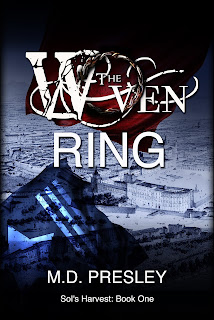 A fantasy reimagining of the American Civil War that pits muskets against magic, massive war machines against mind readers, and glass sabers against soldiers in psychic exoskeletons.

In exile since the civil war, former spy and turncoat Marta Childress wants to quietly live out her remaining days in the West. But then her manipulative brother arrives with one final mission: Transport the daughter of a hated inventor deep into the East. Forced to decide between safely delivering the girl and assassinating the inventor, Marta is torn between ensuring peace or sparking a second civil war.

Her father’s gaze flicked from one child to the next, neither willing to acknowledge the other. For a moment he looked crestfallen as he regarded them both. “Hate is easy. Love hard.”

“And indifference the most difficult,” chimed in. The saying was old as time, most people only recollecting the first half. But was a good student, always reciting his lessons proudly.

“That it is,” her father responded, waving Marta forward.

Marta remained planted firmly in place, her words spilling out in an attempt to lessen her impending punishment. “I let my anger get the better of me again. Instead of acting, I should have stepped back and thought first. I’m sorry. Again.”

Her father smiled, her apology not fooling him for an instant. “I think you can be forgiven so long as you both learn a lesson today. Marta, my precious little girl, you must remember to never use your Blessed abilities in front of someone outside the clan. For the rest of the world, the Blessed are a tiny minority, only one in twenty gifted by Sol. But we of the Cildra clan are special, nearly eight out of ten of us touched by Sol. And this is our secret, only to be shared within the family. So though it is law that all Whisperers and Listeners wear pins to announce their abilities, neither I, your mother, nor your brother do so. This is our secret to be used to our benefit and none others.” 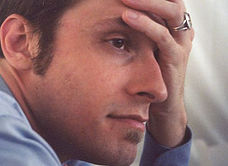 Never passing up the opportunity to speak about himself in the third person, M.D. Presley is not nearly as clever as he thinks he is. Born and raised in , he spent several years on the East Coast and now waits for the West Coast to shake him loose. His favorite words include defenestrate, callipygian, and Algonquin. The fact that monosyllabic is such a long word keeps him up at night.

His blogs and short stories can be found at his cleverly titled website: mdpresley.com

And you can always pick up his book here: https://www.amazon.com/dp/B01IALGCDE?ref_=cm_sw_r_kb_dp_BouHxbKEZD2BZ&tag=kpembed-20&linkCode=kpe


a Rafflecopter giveaway
By DawnsReadingNook at November 29, 2016

Thanks for having me out, Dawn. I hope everyone takes advantage of the free download, and best of luck to everyone in the raffle.