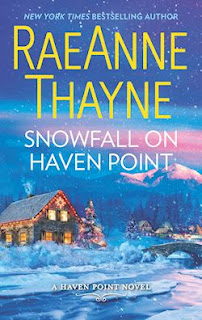 Author RaeAnne Thayne has another installment in her wonderful series of Haven Point called Snowfall on Haven Point and let me tell you it's a wonderful story that will tug at your heartstrings.

Come celebrate the festive season with the authority on contemporary holiday romance, New York Times and USA TODAY bestselling author RaeAnne Thayne, who returns with another chapter in the trials and tribulations of small town life in SNOWFALL ON HAVEN POINT (HQN Books, October 2016, $7.99 U.S./$9.99 CAN.). Set beneath the rugged Idaho mountainside in a magical lakeside town where even the most damaged of souls may find comfort, SNOWFALL ON HAVEN POINT is the latest installment in Thayne’s popular Haven Point series.

My Rating for Snowfall on Haven Point: 4 Stars

My book review of Snowfall on Haven Point:


Andrea Montgomery has spent a rough two years after the death of her husband and now all she wants is for her children to have a happy and safe holiday in their new hometown of Haven Point. But when her good friend, Wynona, asks her to keep an eye out for her brother, Marshall Bailey, after he broke his leg, well Andrea can’t say no to the woman who she and her children owe so much, she never anticipates finding Marshall so dang appealing even if he growls and is quite grouchy towards her.

hates sitting on the sidelines as he heals from a mysterious hit-and-run accident. But he never anticipated finding Andrea so adorable or falling for her two kids even as his protective instincts rise up whenever she is around. As a blizzard forces these two together for the holiday, sparks fly and finds himself drawn to the gentle and spirited woman that is Andrea and enjoys the excitement of the season on her kids’ faces. But if these two headstrong people can’t figure out what their heart is telling them and risk it all, then they just might not get all they could have this Christmas season.

I adore Ms. Thayne’s books and her newest one in the acclaimed Haven Point series (which is a spin-off from her Hope’s Crossing series), SNOWFALL ON HAVEN POINT, delivers a romance that will steal your heart and deliver a story that just makes you breathless. I love seeing some familiar faces and we see some new ones as well in this latest installment. This is a story that started when we met Andrea and her kids in in Wynona’s story and continues with Andrea having her own book next. I love how the author incorporates such wonderful small town traditions and setting in her Haven Point and Hope’s Crossing series. With each book in the series, we get drawn into a place filled with intriguing characters, a storyline that is as real as can be and a setting that just makes you want to go visit. The author does a wonderful job in capturing that spirit of small towns-the good and the bad-and makes the reader feel like they are right beside her beloved characters as well.

Meet Marshall Bailey and Andrea Montgomery. Two people who are polar opposites yet are drawn to one another after putting down the wall around their hearts. We met these two secondary characters in and I was thrilled to see Andrea get her own story after that book and to my surprise it was with Marshall Bailey, Sheriff of Lake Haven, and Wynona’s older brother. I love these two characters together. Andrea and her kids soften stern and tough and he pretty much melts into a puddle after he begins to fall for her, kicking and screaming all the way. The chemistry between these two is off the charts and it simmers between them continually. I enjoyed catching up with some familiar and favorite characters as well as some new ones that I am really hoping become more prominent in future books in the series. The characters are well written and show vulnerabilities that real people have. They also stole my heart, more than once. The secondary characters kept the story flowing smoothly and I found that they added a little light heartedness to the storyline that alleviated the search for answers in ’s hit-and-run driver.

SNOWFALL ON HAVEN POINT is a delightful read that will transport you to a small town filled with heart and with characters that will feel like family after your done reading the book. I am really hoping Ms. Thayne continues with this amazing series and hope you can pick up any of her books since they are so dang good. If you are looking for a great holiday story to read then grab SNOWFALL ON HAVEN POINT and get ready to fall in love with a small town that delivers more than you think. 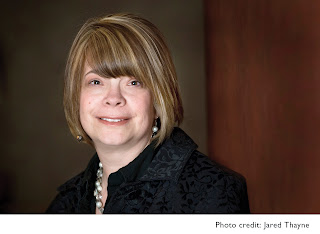 New York Times and USA TODAY bestselling author RaeAnne Thayne loves words. Her love affair started as soon as she learned to read, when she used to devour anything she could get her hands on: cereal boxes, encyclopedias, the phone book, you name it! She loves the way words sound, the way they look on the page and the amazing way they can be jumbled together in so many combinations to tell a story. Her love of reading and writing those words led her to a fifteen-year career in journalism as a newspaper reporter and editor. Through it all, she dreamed of writing the kind of stories she loved best. She sold her first book in 1995 and since then she’s published more than 40 titles. Her books have won many honors, including three RITA® Award nominations from the Romance Writers of America and a Career Achievement Award from RT Book Reviews. RaeAnne finds inspiration in the rugged northern Utah mountains where she lives with her hero of a husband and their children. She loves to hear from readers and can be reached through her website at www.raeannethayne.com.

By DawnsReadingNook at September 25, 2016