Please give a warm welcome to Kai from Dangerous Waves by L.M. Brown today as we sit down and see what makes him tick.

Q: So tell us about yourself. What got you in the cross hairs for your author?
My name’s Kai, just Kai, since my people don’t have what humans call surnames. Yes, you did hear me right. I referred to humans without including myself in that number. I know I look like a regular man, but I’m actually only half human. I’m what is commonly referred to as a merman. Under the water I have fins and a tail.

I’m also one of the three Oracles, which means when I’m underwater I’m completely blind, unless I’m having a vision. As you can imagine, being blind in what can be a pretty hostile environment makes us quite vulnerable. When was growing up I wanted to be a warrior, but instead I was chosen as an Oracle. It wasn’t what I wanted and I do resent the rules we have to live by. The big one being that we’re forbidden to have sex.

This is particularly hard for the merpeople because we go into heat twice a year, at the summer and winter solstice.  If we don’t have sex during these mating seasons it’s painful for us, and the pain gets worse for every solstice we remain abstinent.

Thankfully, I’m not the type of merman to put up with that and I made sure my feelings were known. I deserve love as much as any other merman and a rule I never agreed to isn’t going to stop me. 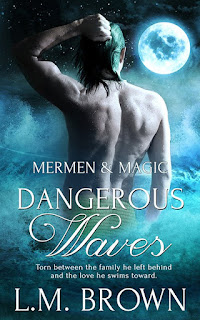 Q: What was it that drew you to your mate?
It was the Atlantean Goddess of Love who actually set me on the right path to meet Dax. The merpeople don’t have any religion, not like humans do, but when we’ve seen the power of the gods and goddesses for ourselves, we can’t deny their existence.  I went to ask her for help and she made sure we had the opportunity to meet and helped us break those rules.

I have to admit there were times when I wasn’t sure whether Dax was the right merman for me. The attraction was there, because let’s face it, who wouldn’t be attracted to a handsome, well-built warrior merman.

My fear was that he didn’t see me as an equal. It was up to me to prove myself.

Q: A little naughty fun, where was the wildest place you seduced your partner(s)?
It probably sounds strange to a human, but your beds are wild to us.  Merpeople go to land to mate, so we end up on sandy beaches, in deserted glades and that sort of place. You probably consider those places wild, but for us they are normal.  Heading to the land of humans was quite an adventure and your indoor rain machines and soft beds are a huge novelty for us.

Q: Boxers, briefs or Commando on a man?
*laughs*  I’m a merman and so is my lover. We try to avoid clothes at all, though after that incident with your authorities we realise we do have to cover up in your world. We definitely avoid as much clothing as we can, so definitely Commando.

Q: If your partner wants to seduce you, what's one sure fire trick they can do to seduce you?
Dax knows that nothing turns me on faster than seeing him on his knees in front of me. Since we live in the ocean, and only tend to go to land for sex, we both know that simply swimming in the direction of a nearby island will only lead to one thing, or two, or three, well, you get the general idea, I’m sure.

Q: What is the one place on your partner's body that you know will drive them wild-in and out of bed?
All mermen have pretty sensitive fins and Dax is no exception. If you stroke our fins in just the right place we can almost orgasm just from that. The only thing that stops us is the fact we only have our sex organs when we’re in human form.  Dax’s fins are even more sensitive than most, and I know if I tease him too much he’ll drag me to land and give me exactly what I need.

Q: What was one of the most embarrassing things your author did to you in Dangerous Waves?
Probably repeatedly telling everyone I’m untouched. It’s not like it was my fault I was called as an Oracle, right before my very first mating season, and I certainly didn’t make the rules that forbid us from having sex. Being known as the oldest virgin in the sunken city was humiliating and she made sure everyone knew.

Q: Anything else you would like to add?
Just thank you for having me here, and for letting me talk about my favourite subject, Dax, who despite being even blinder than I am at times, gave up more for me than I could ever have hoped.

Thank you Kai for joining us on 'Meet the Character' day here at Dawn’s Reading Nook Blog. You can find all of L.M. Brown books at

When Dax lost his family to a shark attack he swam away from everything he had ever known. Now he has come to Atlantis, hoping to reconnect with those he left behind. When he finds his birth clan torn apart, he realises his journey is just beginning.

Kai is an Oracle, a blind merman, who only has sight when he has a vision. Atlantis, a sanctuary for so many mer people, is his prison. Desperation drives him to beg the Atlantean Goddess of Love for help.

With the goddess’s promise of love to tempt him, Kai persuades Dax to take him along when he leaves the sunken city.

Although Dax has some reservations about traveling through the ocean with a blind merman in tow, he quickly discovers Kai isn’t as helpless as he appears. Attraction comes easy, but Kai doesn’t seem to feel the same way.

Kai knows he must seduce Dax if he hopes to win his heart, but his inexperience may be his downfall. With Dax’s former lover at the end of their journey, he knows time is running out.
A goddess can only help so much, especially when another immortal would see them part. If the two stubborn mermen want a life together, they will have to learn to communicate and fight for their love.

Now the mating season was here, Kai remembered Medina’s warning to him. If he should give Dax his body before he was sure of his heart, he would lose him. Unfortunately, Kai had no doubt Dax’s heart was securely in his own keeping right now. Kai had no intention of risking losing him for a quick romp in the sand. As painful as the solstice would be, he couldn’t let Dax take him. But what was he supposed to tell Dax about his decision? The truth was out of the question, unless he wanted Dax to think him a fool, or even worse, a manipulator.
“We’ll go to the island until the solstice is over,” Dax stated firmly. “You and I will use each other to break the damn fevers, then we’ll be on our way again.”
“Use each other?” Kai knew what Dax meant, but he still couldn’t quite believe the merman could be so casual about sex. Didn’t sharing his body with a lover mean anything to him?
“I need to take another merman to break the fever. I’m hoping your fever recedes when you’re taken. You’ll forgive me for saying so, but you do rather look like someone who would enjoy being on the receiving end.”
Kai pulled his arm from Dax’s loose grasp. “You think to judge what I need by my appearance? What would you say if I told you I needed to ram my cock into your arse to break my fever? Would you be so eager for us to use each other then?”
Dax grabbed hold of him again, but Kai used his tail to smack him sharply and push him away. “You aren’t going to use me this solstice or any other.”
“You’d rather suffer through the fever just to be faithful to Delwyn?”
“What are you talking about?”
“I saw the way he kissed you right before we left. Do you think he’ll be moping around waiting for you to come back? No, he’ll be up on the island the colony uses, getting what he needs from another merman.”
“No, he won’t.”
“Of course he will. As soon as he realizes how bad the fever gets when he doesn’t find his release he’ll be begging another merman to take your place.”
Kai smacked Dax again, this time sending him spinning through the water. “You have no idea what you’re talking about.”
“I’ve been through enough seasons without breaking the fever to know how bad it is,” Dax argued. “You have no idea of the pain.”
Kai swam away from Dax before he answered. “I know more than you do. How many seasons did you go through without release? Four or five, perhaps? Try going through more than twenty, then speak to me again about the pain.”
“What do you mean, more than twenty?”
“Oracles are not allowed to engage in sexual relations,” Kai explained. “I came into my powers just as I hit puberty. I’m twenty seven years of age and there are two mating seasons a year. You figure out how many times I’ve had to ride out the fever without release.”
“You’re a virgin?” Dax sounded stunned. Kai hadn’t anticipated he wouldn’t believe him. He guessed Dax must have thought he had lots of experience before becoming an Oracle, or he didn’t realize just how much of a prison the city had been for them. Kai supposed it was better he knew the truth now, rather than finding out when they were in the midst of a more intimate situation, assuming they ever were.
“As I said, sexual relations are forbidden for us. We aren’t allowed to leave the city, for any reason.”
“You’re really a virgin?”
Kai smacked Dax with his tail again.
“And would you stop doing that! You know for a blind merman, you’ve got a damn good aim with that thing.”
“I’m the Oracle of the present,” Kai reminded him.
“So?”
“So, I can see anything happening right now, including where you are.”
“You know, when you describe it like that, it sounds like you aren’t blind at all.”
“Of course I’m blind, but when I use my powers I can see what’s happening around me or anywhere else in the world. It’s draining to use them all the time, but a glimpse now and then is enough for me to get by.”
Dax snorted. “And you choose to use your powers to perfect your aim when you want to assault me. Charming!”
Kai swam away from Dax, and, after a quick glance to get his bearings, he swam for a nearby cave entrance. It didn’t look particularly welcoming, but it would do as a place to wait out the solstice.

By DawnsReadingNook at September 23, 2016

Thank you for having us here today. :-)