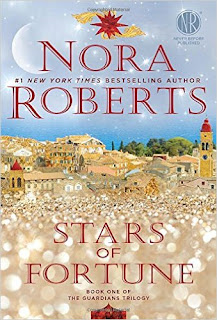 A wildly intriguing first book in a new trilogy from the acclaimed Nora Roberts.

My Rating for Stars of Fortune is 3.5 Stars


Artist Sasha Riggs has been haunted for over a year by dreams and nightmares, of people she has never seen or met so when she gives in and decides to follow what her dreams are saying, she is at the Island of Capri where she meets the five people she has dreamed of for over a year. Six strangers must form a cohesive unit and find the three stars that fell from the sky. If they don’t, then the worlds will tremble and crumble as the darkness gathers to drive out the light. With the help of a magician, a loner, a stranger, a fighter and an architect, Sasha finds the strength to accept this mission from the gods and try to thwart an evil so deadly, it will kill to get to the stars. But the question remains, can these six people find a way to trust one another with their secrets even as they fight to the death?

I adore Nora Roberts when she writes these trilogies. It gets me through the times when her next big JD Robb book isn’t out yet and I can get my fix this way. But with STARS OF FORTUNE, we get the same formula as her previous trilogies but with a setting that is as lush as it is delightful. I got to give this author credit, she manages to create some interesting storylines for her trilogies that just pull me in after awhile and with a cast of characters that I fall in love with. That said, I got to drop the rating for this first book a little because it does feel like ‘same old, same old’ here. We got light vs. dark, evil wanting to keep the prizes and rule the world and characters where at least one or two feel like I have read about them before. Every so often there comes a time where this prolific author just feels like they are returning to a tried and true formula and is checking off boxes. Over all, I fell into the story after I figured out who was what and the fight that these characters faced. I loved how a few of the characters were a tad different in a way that made them fresh and intriguing. I am eager to see what Annika, Doyle and Sawyer have up their sleeves as well as see who they fall in love with.

But for this first book, we meet all the players though Sasha and Bran are the center of book one. Bran is a magician though he has secrets that over time come out to the rest of t he group in surprise. Sasha is a see, dreams things that can come true and is shaken to her core over the strength these dreams and nightmares have been the last year. What she didn’t expect was finally seeing the five people she painted come to life and join her in a quest that could kill them all. I loved the connection between Bran and Sasha but what got old quick was Sasha constantly telling herself she is weak and needing to be stronger. For me, Sasha was strong, stronger than she even knew but Bran’s constant reassurances got old really quick. It was borderline whininess and neediness that I had to kill the urge a few times to not yell at the book or smack Sasha repeatedly. I liked the characters dynamic with one another and how they, after a period of time, formed a bond that just grew stronger with each page being flipped. The characters are quite strong and each unique enough to avoid the same old thing we see sometimes in other stories in the same genre.

STARS OF FORTUNE was an intriguing story that drew me in after a few chapters and I got invested I the characters as they raced to find the first star before the evil goddess who wants it for their own nefarious purposes. Ms. Roberts delivers an entertaining story that will keep you glued to the pages until the very end. Now I can not wait to read book two, , and see where this dedicated group of strangers goes next.

The Guardians trilogy is as follows: 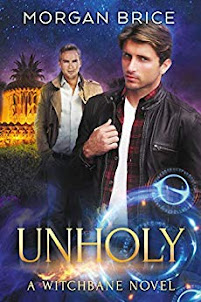