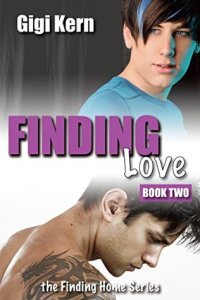 Aaron is in love with his new boyfriend TJ and living with his best friend Ryan. Life is perfect. Right? Except his past rears its ugly head threatening everything he has and ever wanted. Now that would be the end of his story, but ever since Aaron met the Fosters and his hot boyfriend TJ, his luck has changed! Dreams really do come true!! Shush it's a secret... I know the writer of Finding Love, and she told me... "When I originally came up with the idea for Finding Love, this is what I had in mind... Yes I didn't see everything at the time. But I did see their first time. And the anxiety Aaron would have. And I knew that TJ's friends wouldn't "get" their relationship. But I didn't see Rick giving the "talk".

Awesome right!" I'd tell you more, but I think the author is on the look out. She promised me to secrecy. But how could I not share right!! Disclaimer: Because of Aaron's cuteness, TJ's hotness, Ryan's awesomeness and David being David, please Read Book# 1 Finding Aaron first. How else can you fall under their spell.

EXCERPT Focusing solely on Aaron, he manhandled him as gently as he could. Over the past several months of his and Aaron’s relationship TJ noticed that the trust Aaron had in him not to hurt him was mind-blowing. It was his touch, sight unseen sometimes, that would always center and calm Aaron. Knowing this, TJ always tried to use this sparingly and held it in the reverence it deserved. Ryan, Aaron’s best friend and TJ’s nephew, didn’t even have this ability. Gently pulling Aaron out of the recliner, TJ maneuvered himself behind Aaron and unceremoniously plopped down into the chair. Slowly TJ repositioned Aaron and seconds later Aaron was in TJ’s lap and they were cuddling. Yes, CUDDLING. It was a major shock to TJ and everyone around him that he actually liked to cuddle. Yet again another revelation these past few months brought as TJ descended into the rabbit hole that was “Aaron Samuel” and found it got more intriguing by the day. Wrapping his arm around Aaron’s slim shoulders brought the needed warmth to Aaron’s shivering body. “Aw, look how cute and comfy the two resident lovebirds look,” David said with a snicker as he draped the blanket across Aaron’s lap and chest.

At 23, Aaron has aged out of the foster-care system and is now a struggling college student. Between his severe Learning Disabilities, ADHD and past trauma, every day is a struggle. Three years ago, Aaron's world got a whole lot brighter thanks to his new best friend, Ryan Foster and his family. The Fosters have taken him into the fold. That is, everyone except for Ryan's Uncle TJ. When Aaron and TJ meet, sparks fly. TJ, 31, can't stand his nephew's flamboyant, in your face, blue-haired, rainbow loving, best friend. He knows he shouldn't be so judgmental but after spending five years in Iraq and Afghanistan, his patience is buried under a mountain of guilt and loss. TJ's animosity toward Aaron always stresses Aaron out going home to the Foster's for the holidays but they are the only family he has. He just needs to put up with TJ. He can do that, right? When something happens that neither one wants to acknowledge, it may just be the catalyst needed for the sparks to explode. What happens when TJ lets himself see the real Aaron? And, can Aaron let TJ past his defenses, when he's barely holding on.

Gigi Kern is currently writing the third book, Finding David in the Finding Home series, her first gay contemporary romance series. A huge fan, she along with thousands wait with baited breath for the next new release from her favorite gay romance authors. Gigi first discovered her passion for reading out of desperation. During her month long hiatus for her seventh grade summer break, spending quality time with the grandparents in sunny Florida in August, the hottest time of year, she became desperate. See, awesome grandparents had no cable. Travesty though it was, Gigi discovered the retirement community's library and there it was in all its glory, Heaven by V.C. Andrews. And she's been hooked ever since. Though her day job is monotonous, she has been able to work in three continents, travel and see the world. Her menagerie of wooden animals from her world travels have major competition from her two cats, Marco-pollo and Squertie. And, cause what would a menagerie be without animals, her two 65+ pound dogs, Leo the lug and Blink the destroyer of toys. She is currently writing her life away on the shores of North Carolina.