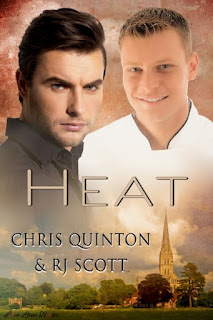 Serving up passion, family, love and hate, with a side order of arson.

Lewis has lost nearly everything, and now it seems that Devon is here to take the last thing he has left - working in his beloved restaurant, Laurels. But when an arsonist threatens everything Lewis loves, he realizes sometimes everyone has their ghosts, and he discovers an unexpected ally who is prepared to risk everything for him.

Set in the small cathedral city of Salisbury, Master Chef Lewis Mandineau no longer owns the Laurels, the restaurant that had been in his family for generations. Betrayed and robbed by an ex-lover, he's had to sell to Carnegie Enterprises, an American corporation. That isn't all Lewis has to contend with. Rachel, his beloved younger sister has been left severely hurt by the car crash that killed their parents, and taking care of her has to be his priority.

Enter Devon Trelawney III, sent to assess the viability of the restaurant and its staff. Devon knows all about family tradition. But he also knows sentiment has no place in business matters, and the Laurels' potential is swamped by the debts it has accrued. Devon is a hardheaded businessman, first and foremost, but Lewis and Rachel test his resolve in different ways. Soon Devon is forced to admit that what seems like an impossible love can sometimes become something very real.

When Devon returned, he paused by Lewis’s workstation just as he finished filling the piping bag with the very pink buttercream icing. Yesterday’s fairy cakes sat on their tray, their tops already sliced off and halved to make the wings.

“No, for my sister.” No one else was in the kitchen at the moment, and the door to the staffroom was shut, so no one could overhear Lewis snipe at the new boss. “And before you say it, the ingredients are my own, bought and brought in for the purpose. I’m sure you can work out how much to charge me for the gas I used to bake them.”

Devon opened his mouth to say something, then shut it just as quickly. Evidently he didn’t want to grace Lewis’s comment with an answer. Immediately Lewis felt lower than low. He was a trained, sought-after chef, not a kid taking cheap shots at someone in his class he didn’t like.

Then Devon spoke and any inner commentary about feeling guilty was wiped away in an instant. “What is that crap you kept on bringing me?”

“Peppermint and camomile. It’s good for migraines and headaches. And it’s mine.” Then he couldn’t resist. “I’ll be sending you a bill later.”

“And you can fix me another one while you’re at it!”

“Fine!” Lewis met Devon’s glower with one of his own. The three-inch difference in their heights made a nose to nose face off a little awkward, but he’d be damned if he’d let the man stare him down. Then Lewis saw the amber flecks in Devon’s coffee- dark eyes and lost track of his anger. If he leant forward just a few inches, Devon would be in kissing range.

Handsome is as handsome does… Em’s voice echoed in his mind, and he stepped back. Devon moved away at the same time, and the subtle tension that had nothing to do with anger faded away.

Their gazes were still locked, and gradually the silliness of their confrontation struck Lewis. He struggled to contain his smile, knew he was failing and bit his lip. Devon glanced down and focused on Lewis’s mouth. Devon flushed, and suddenly Lewis’s gaydar kicked in.

It was like a bucket of icy water thrown in his face. Having the hots for a straight man was one thing: they were suitable dream fodder, safe and out of reach. But not for another gay man. Not after Peter. Especially his boss, an ill-tempered arsehole who seemed to be hell-bent on alienating every one of Laurels’ staff.

RJ's goal is to write stories with a heart of romance, a troubled road to reach happiness, and most importantly, that hint of a happily ever after.RJ Scott is the bestselling gay romance author of over ninety MM romance books. She writes emotional stories of complicated characters, cowboys, millionaire, princes, and the men who get mixed up in their lives. RJ is known for writing books that always end with a happy ever after. She lives just outside London and spends every waking minute she isn't with family either reading or writing. RJ also writes MF romance under the name Rozenn Scott.The last time she had a week’s break from writing she didn't like it one little bit, and she has yet to meet a bottle of wine she couldn’t defeat.


Chris Quinton started creating stories not long after she mastered joined-up writing, somewhat to the bemusement of her parents and her English teachers. But she received plenty of encouragement. Her dad gave her an already old Everest typewriter when she was ten, and it was probably the best gift she'd ever received – until the inventions of the home-computer and the worldwide web.

Chris's reading and writing interests range from historical, mystery, and paranormal, to science-fiction and fantasy, writing mostly in the male/male genre. She refuses to be pigeon-holed and intends to uphold the long and honourable tradition of the Eccentric Brit to the best of her ability. In her spare time [hah!] she reads, embroiders, quilts and knits. Over the years she has been a stable lad [briefly] in a local racing stable and stud, a part-time and unpaid amateur archaeologist, a civilian clerk at her local police station and a 15th century re-enactor.

She lives in a small and ancient city in the south-west of the United Kingdom, sharing her usually chaotic home with an extended family, three dogs, a frilled dragon [lizard] and sundry goldfish and tropicals.

a Rafflecopter giveaway
By DawnsReadingNook at June 11, 2016