Don't forget to enter the giveaway at the end of the post for a chance to win a $10 Amazon or BN Gift Card from the author. The tour is sponsored by Goddess Fish Promotions and you can find all the tour stops HERE

Now let's check out Jennifer Kacey's No Place like Home... 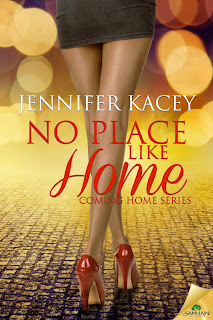 In high school, Bianca Charleston was a nobody. An overweight wallflower, so invisible that Cole, the boy she had a crush on, never even knew she existed.

Things have changed, and she’s finally ready to show off her new bombshell look. Sort of. Maybe. After a one-sided pep talk with her cat, she takes a deep breath and flies home to help out with the annual hospital carnival. Cole is there, too—and he still has no idea who she is.

FBI field officer Cole Johnson doesn’t have an easy job, and his nights are usually booked solid. Then in walks Charlie, a blonde with killer…everything. Suddenly he’s mentally clearing his schedule for a rare night out. While Charlie doesn’t do one-night stands, somehow after-dinner dessert is served up against the wall of her hotel room. But happiness will have to navigate an emotional minefield of preconceived notions—and a couple of not-so-secret stumbling blocks.

“Bet you were happy. Being able to reinvent yourself like that.”

“Reinvent. I’d never really thought about it that way. But you’re absolutely right.”

Her shy smile tugged at his heart, which needed to shut the hell up. “I know something about that.”

“And we’re going to keep it that way.” She moved around him and headed toward the door.

Hesitation made her stutter her words. “It’s…uhh…getting late and I have a lot of packets still to deliver. Plus, I’m sure you have tons of work to do. Can’t imagine you get much downtime around here.”

He glanced at his computer screen. He really needed to get back to it. He didn’t have time to talk to her, nor pursue her. His plate was full. Overflowing even. And he had Addyson. So he opened his mouth to tell her it was nice meeting her and maybe he’d see her at the carnival. “Want to go out and we can catch up? That way you won’t feel like you’re interrupting and I can concentrate on you.”

Her eyes went wide and her fingers wrapped around her purse strap as if he were some kind of pod person. “Like a date?”

“I’m kind of out of practice but I’m trying to be all suave so you’ll take pity on me and say yes.”

He decided to own it. “Normally not.”

She sounded skeptical or hopeful. He didn’t know which, but he sure as hell wanted a chance to know more. 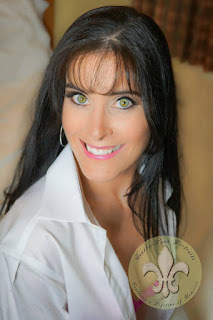 Jennifer Kacey is a writer, mother, and business owner living with her miniman in Texas. She sings in the shower, plays piano in her dreams, and has to have a different color of nail polish every week. She’s the Amazon top seller/evil mastermind of the Elite Warriors Series and award winning author of the Members Only Series and the Surrender Series along with several standalone novels and novellas. The best advice she’s ever been given? Find the real you and never settle for anything less. Connect with her on twitter @JenniferKacey and Facebook. And don’t forget to sign up for her newsletter so you can hear about all of her new releases and giveaways!!

a Rafflecopter giveaway
By DawnsReadingNook at March 01, 2016