Book Spotlight: The Professor & the Smuggler by Bonnie Dee and Summer Devon 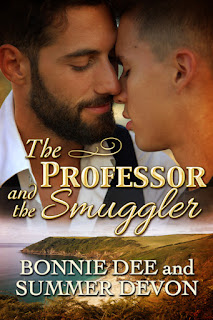 Our spotlight book is a journey along the Cornish coast.

A grumpy smuggler meets a bumbling professor and treasure is found.

An explorer at heart, former university professor Phillip Singleton’s adventures have only taken place in his imagination—until recently. Exploring the Cornish coast to research a travel book, he encounters a living example of a pirate archetype. Dark-haired, black-bearded Carne Treleaven might have been hewn from the very rock his name describes, and Phillip is eager to discover more.

Carne has little patience for the awkward, dreamy professor, an outsider who must be steered away from local secrets. He agrees to serve as a guide to seaside caves where smugglers once operated only to keep Phillip away from more recent activity.

As personalities clash, secrets unfold, and riches are revealed, the two polar opposites find the point where their similarities lay. Carne’s old beliefs are shattered by his attraction to a man and he must decide if he’s willing to take a huge step outside his familiar life and into a brand new world.

Singleton apparently forgot Carne after he’d carried the tripod back to the clearing. The professor talked to himself and peered down at the equipment, brows raised as if he was surprised to find the camera, as if it had arrived from nowhere. A couple of minutes showed he did seem to know what he was doing as he expertly attached camera to tripod and adjusted the lens.
Carne had come to the stones intending to drive off the stranger, but found himself gazing at the accordion leather, brass, and glass contraption. “What sort of camera is that?”
“A Zeiss. You might be surprised to hear that, because they’re known for their microscopes.”
Carne bit back the retort that certainly he was fair astounded to hear it, though he had no bloody notion of who made microscopes and, truth to tell, wasn’t entirely certain what a microscope did.
“I also have a Kodak, much cheaper, and I could even carry it with no problem, but this is better for my project.” He took a moment to beam at Carne, the sunlight reflecting off his spectacles and hiding those bright gray eyes. As he went back to work, he launched into a long explanation of wet plates, dry plates, and nitrocellulose. He seemed particularly excited about adjustable lenses.
Carne hadn’t known he wanted to hear a history of photography, but it was more interesting than he might have expected. The professor’s enthusiasm and ability to talk made the world of cameras sound downright fascinating.
He stood and watched and listened until he heard the far-off bell that reminded him he had a meeting to get to. “You said weeks, but surely you plan to move along to the next village sooner than that. There’s nothing to do round here. Nothing hardly like entertainment.”
Singleton laughed, showing straight, very white teeth. Could they be false?
“Somethin’ funny?” Carne asked.
“I don’t require entertainment,” he explained and for some reason blushed.
Apparently, the stranger truly didn’t need much to amuse him if he thought Carne’s words were funny.
“Not lingering in Par Gwynear, are you,” he said rather than asked.
“Oh, just some exploration and interviews. I would love to talk to people about local lore and legends.”
“Don’t ask too many questions,” Carne said.
Singleton looked up from adjusting the lens. “How will I find out what I need to know if I don’t ask questions, Mr. Carne?” He brightened and added, “Ha. Cairn, Carne. Is your name derived from ancestors living near a pile of rocks?”
Was that some sort of bizarre insult? Probably not, judging from the earnest look on the professor’s thin face and the way he waited for an answer.
“No idea.” Carne didn’t bother to explain it was his first name. He wasn’t willing to share his surname, Treleaven, with a stranger. “Professor, there’s no inn hereabouts. You won’t find anywhere to lay your head down. Go inland a few miles, you’ll get to—”
Singleton interrupted. “Not a professor any longer. Mr. Singleton will do. And it’s no bother. I have gear in my motorcar. One appreciates sleeping under the stars in weather as fine as this.”
The man was an idiot, though as appealing as a gangly puppy—a large one, perhaps some sort of wolfhound. All right, idiot was the wrong description, for Singleton had a brain jammed into his head. And he certainly had more than enough money if he jolted about the countryside in a motoring car with cameras for company.

our bio: Summer Devon and Bonnie Dee have co-written over a dozen books. Their historical novels often feature cross class romances which give the protagonists even greater hurtles to overcome than being gay men in dangerous times. Summer is the alter ego of author, Kate Rothwell, who writes gaslight historicals. Bonnie is interested in flawed, often damaged, people who find happiness together. These writers met by chance online and have had a fabulous time passing stories back and forth, creating characters and situations in what might be the world's longest party game.