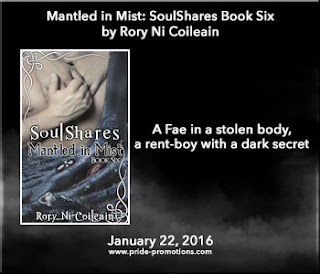 Discover Rory Ni Coilleain's Mantled in Mist, book six in the SoulShares series. Don't forget to enter the giveaway at the end of the post for a chance to win an e-copy of book 1. The contest closes on January 29th, 2016. The book blast is sponsored by Pride Promotions. 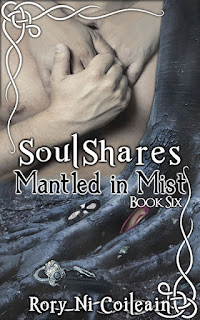 Fiachra Dubhdara is a Fae living a stolen life, in a stolen body, and the newest detective on the D.C. Vice squad. Peri Katsura is the newest and hottest masseur at Lochlann Doran’s Big Boy Massage, inexplicably drawn to the gorgeous cop assigned to bust him. And the owner of Fiachra’s body has a plan to get it back – a plan that may cost Fiachra his SoulShare.

Excerpt:
The human’s laughter was completely unFae.
And it made everything perfect.
But then it faded. “Let me turn around.” Peri’s gaze dropped.
“Why do you —”
“Please.” He slid his legs off Fiachra’s shoulders, easing up onto his elbows. “Don’t treat me like something I’m not.”
Fiachra’s eyes narrowed. “Am I not allowed to treat you like a male whose smile I would give my left nut to see just because money changed hands?”
Peri stared.
“We agreed I’m not renting you, right? So I’ll do everything I can to make you pass out from pleasure if I fucking well feel like it.” Fiachra could feel his face flushing. Where is all of this coming from? Fae didn’t act like this. Didn’t feel like this.
Then he remembered Conall, looking at Josh. Cuinn and Rian, both of them Fae to the core, every breath either one took all wrapped up in the other.
Peri’s my SoulShare. Or I’m insane. And I don’t think I’m insane.

Meet the author:
Rory Ni Coileain has been writing almost as long as she’s been reading, and reading almost as long as she’s been talking. She majored in creative writing in college, back when Respectable Colleges didn't offer such a major, so she designed it herself—being careful to ensure that she never had to take a class before nine in the morning or take a Hemingway survey course.

She graduated Phi Beta Kappa at the age of nineteen, sent off her first short story to an anthology being assembled by an author she idolized, received the kind of rejection letter that fuels decades of therapy, and found other things to do for the next thirty years or so, including nightclub singing, working as a volunteer lawyer for Gay Men’s Health Crisis, and studying ballet in New York City, until her stories grabbed her by the shirt collar and announced they were back.

Now she's a legal editor, a soprano in her church choir and the St. Mark’s Cathedral Choral Society (unless they’re singing Mozart, because she’s decided that Mozart didn’t like second sopranos very much), the mother of a teenaged son and budding film-maker, and amanuensis to a host of Fae, Gille Dubh, and shapeshifters who are all anxious to tell their stories, and some of whom aren’t very good at waiting their turns.

a Rafflecopter giveaway
By DawnsReadingNook at January 22, 2016