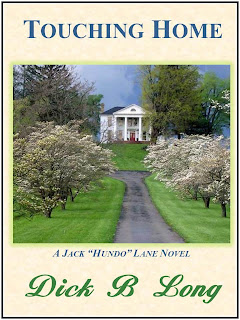 Book Blurb
Weary of war, Captain Jack “Hundo” Lane is looking forward to his thirty-day leave before being redeployed back to Vietnam. He really wants to see his grandfather, Pat Henry, and Annie, the little Thai girl he rescued from the streets of Bangkok. Sending Annie home to Pat saved the innocent child from a life of prostitution in her native land and is one of Jack’s proudest moments. For a man so young, he has a good appreciation of the value of touching home, getting back a sense of real life as opposed to battle life. He loves the large farm where he grew up, the open fields, his private river island, and the quiet peace he feels all around him.

At home, he reconnects with an old high school friend, but on the first date realizes she has changed a lot in five years, mostly not for the better. While grooming his horse one morning at the barn, he meets the county’s new veterinarian. Dr. Sue Gore is not only a skilled and caring doctor, she is a gorgeous, engaging woman. From their first date, Jack realizes he likes her very much and has no interest in other women, despite the attention he is shown by young women of his hometown.

They rode in comfortable silence for a while, enjoying the sunshine and serene countryside. Then Hundo chuckled. “Well, what do you think?”
“That’s it?” Sue reined up next to him and looked at the island in the middle of the Etowah. “It looks like the river just split and ran around it.”
“I think that huge rock at the point started the split.”
“How big is the island?”
“Almost two acres. Someday I’m going to build a cabin on that high ridge in the middle.”
“I can see it.”
“Follow me down the bank, There’s a nice place to ford across from those rocks.”
* * * *
“I can see why you like this place. It’s so peaceful, quiet.” Sue sat on the blanket Hundo had brought with her right leg folded under her and her left leg pulled up. She rested her left hand on her knee and rested her head against it. Hundo smiled at her as she watched him build a fire with a flint and steel. He sharpened two sticks, put hotdogs on them, then stuck them in the ground at an angle so the dogs were over the fire.
“I use to come here by myself when I was in high school, sometimes to study, sometimes just to be alone.”
Sue looked around at the lean-to built next to the huge rocks which sheltered it from the wind. She smiled as she watched Hundo pull the cork from the wine bottle and then produce two wine glasses out of thin air. He poured the wine and handed a glass to her. “Thanks, where on earth did you have these?”
“In my saddlebags, they were wrapped in the blanket.” He moved over to sit next to her, watching the fire. “Do you want catsup and mustard on your hotdog?”
“Of course and in a bun.” She patted his leg.
“Naturally.”
“You seem to be happier being here.”
“I am. I’ve always felt truly at home here. As I said I want to build a cabin on the high ground someday.”
“So it’s your get-away place.”
“I guess it is.” He handed her a hotdog in a bun, cradled in a napkin.
“I don’t think I’ve had hotdogs and wine before,” Sue said.
“Well, you have to have the right wine.”
“Exactly.” Sue laughed.
After a few minutes, she looked at Hundo. “What’s it like being in Vietnam?”
He thought for a minute before he responded. “Hot, lots of humidity. The people are a small people, not many over five-five or over hundred thirty pounds. You sweat weight off right fast.”
“I guess you’re glad your time there is over.”
“I’ll be there again within sixty days.”
“But you said you had already been there a couple times.”
“I’ve been given an assignment which requires I go over again.”
“But why do that?”
“It’s my job. Besides doing that type of assignment is what leads to a quick promotion.”
“You’re very young to be a Captain. Is that why?”
“I’m real good.” Hundo laughed. “No—mostly being at the right place at the right time.”

Author Bio
Dick B. Long is a pseudonym for an author who was a career military officer. He writes stories rooted in his own experiences from a very young man through fighting in three wars for his country. He learned as a teenager that women liked him and he liked them. He first began writing about the women he had known in his life while he was deployed in Afghanistan. In the early days after 9-11, his team did not have books to read, so he first wrote his stories to give his men something to read to keep them occupied between missions. The tales proved to be so popular, they were soon e-mailed throughout the command.
Now retired, he has become a full time writer and is having a ball. Readers are invited to contact him at his e-mail address to let him know what they like and dislike about his stories—and what they would like to read about next.
Email – dick.long@comcast.net
Website - http://dickblong.wix.com/dickblong
Twitter – Dick B Long@DickBLong2


murder on marsh island
By DawnsReadingNook at January 23, 2016