Tour Stop and Giveaway for Her Captain

Don't forget to enter the giveaway at the end of the post. Taryn Kincaid will be awarding a $10 Amazon/BN GC + a download of the book to a randomly drawn winner via rafflecopter during the tour. Tour is sponsored by Goddess Fish Promotions and you can find all the tour stops HERE

Now let's chat with the author...

If you could sit down with any author dead or alive who would it be?

Jane Austen. I think it would be super fun to fill her in on the long way we’ve come, discuss how far we still need to go and find out all about her life and times. I hope she likes ribs and margaritas!

Do you keep a notebook near your for when new ideas pop into your head?

My home desk area is a cluttered mess, but there are lined pads and notebooks all over the place. The profession I’m in also makes a big use of lined pads, so I’ve got them all over my work office and filling the bags I carry on a daily basis, too. Sometimes I’m shocked when I come upon something I jotted down (and never really thought through), and compare it with the finished product!

If you write a series do you reread your previous books before you begin the new one?

Nope. Never. Well, I should backtrack. I’m pretty disorganized and don’t create bibles or anything, so sometimes if a former character pops into the new book to interact with the new hero and heroine, I may have to go back to the book that character originated in to check eye color, hair, that sort of thing.

Is there anything you wish to say to your readers?

Just love you all bunches and bunches. Thank you for reading. Thrilled you’ve given my books a try! And, don’t be shy! I love hearing from you.

For readers who haven't tried your books yet, how do you think your editor or loyal readers would describe your books?

I know for a fact that my Decadent Publishing editor (now a co-owner of Decadent) thinks my books are snarky. I’ve never completely seen that myself! Probably because I’m snarky myself in real life. I try to introduce humor where I can, though, especially in moments that may be serious. Sometimes my humor takes a wry or even sarcastic tone. Yeah, I guess that can be snarky!


I’m always looking for book recommendations. What books have you been reading? Would you recommend them?

I’m currently reading Kresley Cole’s Sweet Ruin, part of her whole, multi-book Immortals After Dark series. Very hot paranormal. It’s billed as a stand-alone, and I suppose it is if you read it strictly as the love story between the current hero and heroine. But if you want to have a handle on the big, overarching plot, you probably should have read, if not all, then a few of the books that came before. Sweet Ruin also takes the series in a new direction, introducing additional characters, as well as older ones so…newbies might need a map!

If zombies attacked what kind of supplies would you want?

Books, chocolate, zombie repellant, barbecued spareribs, a blender, a case of tequila and frozen margarita mix, and bandages, lots and lots of bandages. A power source and a microwave to make the popcorn.

How often does your muse distract you from day to day minutiae?
Most often when I’m driving in the car (especially long distances) or in the shower!

Next up, more hot and sexy wolves from Decadent Publishing.  ANOTHER CHANCE, my next Black Hills Wolves book will release in February. Its hero is another Northridge brother.  I’m working on book involving a third Northridge sibling that I expect (hope!) to see sometime in 2016. As well as a top secret project! 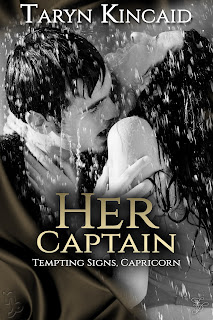 Capricorn Slate Claybourne, an ex-Seal and former sniper who has seen and done things in country that no man should endure, returns to his bucolic hometown on Pieberry  Island, desperate for the mundane, everyday routines he once wanted to escape.

A broken, soul-dead man unable to be around people, his body still a lethal weapon when his night terrors wake him from sleep, Slate’s failed to keep the promise he made to the commander who died in his arms: to look after the older man’s baby girl.

But animated Aries Holly Harper is not the pigtailed tot Slate expected her to be, when she lands on the island to take over the decrepit Pieberry House, determined to turn it into an inn for summer tourists, and even more determined to yank Slate back into the land of the living.

First she crashes into him at the island’s holiday Winter Festival, dumping a towering stack of pies at his feet, then she drags him off to a fortune teller against his better judgment. Except for the sizzling attraction smoldering between them, they’re incompatible in every way.

But when a furious December nor’easter traps them together at Pieberry House, will Slate and Holly overcome their pasts and discover they are two halves of a whole?

His square, sharp-edged jaw solidified like frozen iron, so rigid over his clenched teeth, a muscle ticked in his cheek. She almost laughed at his stunned expression, his cold, gunmetal- gray eyes unblinking, his brows zooming skyward like tarnished McDonald’s arches. Except that the face in question devastated her. If she’d thought him ruggedly handsome in the photos her dad had sent home, the giant, live-action figure totally stole her breath away, turned her knees to jelly, and melted her core. Hell, in another second, she’d be coughing and wheezing, trying to draw in a sip of the sustaining oxygen the hot-as-sin SEAL all but sucked out of the surrounding atmosphere. Jeez Louise. Raw, overpowering masculinity poured off him in waves.

Yet, the smiling face she’d often drooled over in pictures had disappeared. Did the grim man before her smile at all anymore? His sharp eyes seemed haunted in a profound way, his stares hyper-vigilant and unwavering…focused on her but, at the same time, a million miles away. She detected no humor dancing in them at all, despite the comical barbs they’d traded over the smashed pies. Hell knew bottomless grief gripped her still from time to time, wringing tears from her when she least expected the reminders of her loss. But whatever embroiled Slate seemed worse, as if he’d slipped into a dark crevice of endless, dismal eternity and couldn’t find his way back.

Yeah, and good luck with that, girlie-girl.

Buy the book at:

Taryn Kincaid writes paranormal, historical romance and contemporary romance, sometimes spiced with a little humor or a lot of snark. She enjoys pinching and tickling words to make them dance. Her latest, , a post-apocalyptic retelling of Sleeping Beauty, is out now from Decadent Publishing. HER CAPTAIN, a Tempting Signs romance (Capricorn) from Fated Desires Publishing, will release in December, 2015. HER CAPTAIN is available for Pre-Order now!

a Rafflecopter giveaway
By DawnsReadingNook at December 08, 2015

Thanks for having me, Dawn!

Thanks for stopping by, Becky! Glad you enjoyed it!

What words of wisdom would you pass onto your childhood self?

Nice cover! thanks for hosting!

Thank you for the interview and the excerpt.