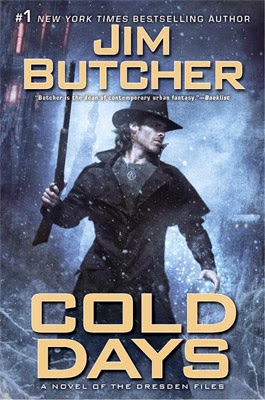 A game changer of a story in the Dresden Files series, this will surely blow your mind then make you want the next book.

My rating for Cold Days: Five Stars and a Recommended Read

Harry Dresden has beaten countless foes as the only wizard in Chicago but he never anticipated being dead. To be brought back to the mortal world, Harry made a deal with Mab, Queen of Air and Darkness and took the mantle of her Winter Knight. Now as Harry navigates Mab’s ‘training’, reconnect with his friends and allies, he has to figure out how to make peace with the fact his choices and decisions have left him in a world of trouble even he wasn’t anticipating. But when Mab orders him to assassinate an immortal, well let’s just say Harry’s day went from bad to worse. Because you can’t kill an immortal…or can you? Old and new enemies abound as Harry navigates the worlds of the Winter Sidhe, humans and magic abound. The question isn’t can Harry do Mab’s bidding but will he still be the Harry everyone knows and loves in the end?

Author Jim Butcher’s Harry Dresden series is a world full of monsters (good and evil), allies and friends and more all rolled up with a bow with each book. With COLD DAYS, the game changes for Harry as he deals with the fall out from the battle in South America with the Red Court Vampires and his decisions that lead to that significant battle. I got to admit I was sucked in from the first page and frankly, I could not put this book down. The story arc continues where it left off in Changes and Ghost Story and continues to deliver an action packed wild ride from start to finish. With each page I turned, Mr. Butcher delivered a one-two punch of epic proportions with storyline twists that left my jaw agape and I was feverishly turning the pages trying to see where he was taking the reader next. COLD DAYS is a game changer story in the series in my opinion and the reader will be highly entertained even as they swear a blue streak at the author over some reveals at the end that will leave you going ‘OH.MY.GOD!’ With each Dresden Files story, the author has cleverly revealed little by little his plan for Harry in the series as his battles fairies, angels, demons and more foes we can shake a stick at. With each book, the characters we first met in Storm Front (Book One in series), they have grown as close as friends and family as we ever could imagine and as they all grapple with events that have happened to them and others, the reader is taken on a thrill ride from the very first page to the very last one in COLD DAYS.

Meet ’s only wizard in the phone book, Harry Dresden. He has beaten back the , battled immortal foes alike and more but no one ever told him coming back from the dead was going to be his hardest problem to solve. This time things have changed for Harry, for his friends and for the world at large. This time, Harry can’t save the day because as the Winter Knight, he is now the champion for Mab, Queen of Air and Darkness. A man, who can be forever changed…if he can’t get a handle on his new powers and try to figure out the puzzle that the world has become since his ‘death’. Jim Butcher has created a series with unforgettable characters and storylines that literally explode with revelations and intriguing story arcs. I was captivated the moment I opened the first book and continue to marvel at this author’s world building, his character development and storytelling. This is an author who knows where he is leading the reader and his few twists in COLD DAYS will leave you gasping in shock and in awe. The characters are well written, completely captivating and the writing is top notch. As I plowed through each book in the series leading up to COLD DAYS, I found myself falling under this author’s spell, determined to see where he would lead the reader even as he moved the characters through each storyline like chess pieces, showing us pieces of a story that eventually would lead up to COLD DAYS story arc.

COLD DAYS delivers, in my opinion, the game changer story in the series. Mr. Butcher completely changes the world as we know it in the Dresden Files Series and makes it into something more; a story that will leave you wondering just what trouble Harry will get into now that he is the Winter Knight as well as a wizard. With each book in this iconic and yes, addicting series, this author continues to keep his readers spellbound, eager for more adventures of Harry and all his friends. I know I am not the only reader going, ‘more please’ to this author. I do recommend reading this series in order as each book leads up to COLD DAYS storyline.

Buy the book HERE
By DawnsReadingNook at December 15, 2014