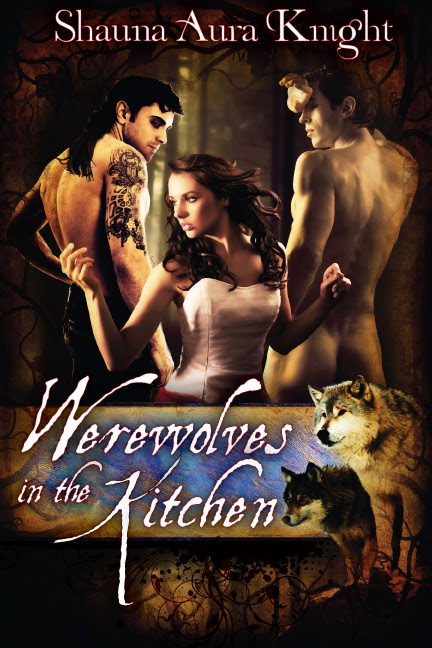 Can you tell us a little about yourself?
The best word for me is probably multigeek. I was raised on Starwars, The Dark Crystal, Labyrinth and Ladyhawke, so it wasn’t really any surprise that I became a fantasy artist and author. I’m always cooking up something, whether that’s a story, a painting, doing graphic design work, or planning an event. I once built a life-size Jabba the Hutt to decorate a party. One of these days I’d like to host a Faerie masquerade in Chicago.

What is your book(s) about?
Werewolves in the Kitchen is about Ellie, a young woman who moves to a retreat center. She’s trying to get clarity on her life, but she develops a crush on two sexy guys working in the kitchen. Little does she know that they also have the hots for her…and also, they are werewolves. Ellie doesn’t quite know what throws her for more of a loop—the werewolves thing, or that she wants to be with both of them.

What are you currently working on?
Actually, I’m just finishing up a short story sequel to Werewolves in the Kitchen called Werewolves with Chocolate. It’ll be offered as a freebie for people on my mailing list. I’ll also be releasing a novella, A Fading Amaranth. Alexandra’s psychic abilities have made it impossible for her to be in a relationship until she meets Nathaniel, a vampire who has lost his muse. When a Faerie monster begins stalking the streets of Chicago, they face dark magic and danger.

What do you do when you’re not writing?
I’ve always got a dozen irons in the fire. I write fiction and nonfiction, and I’m also an artist and a graphic designer, I do my own covers and I do graphic design and covers for other authors. I also travel and teach. In other words, I keep pretty busy with creative projects.

Are any of your characters like you?
Definitely. I give most of my characters a little piece of myself. Often one of my own deeper flaws; it makes them more interesting to write, and gives them a bit of an edge. 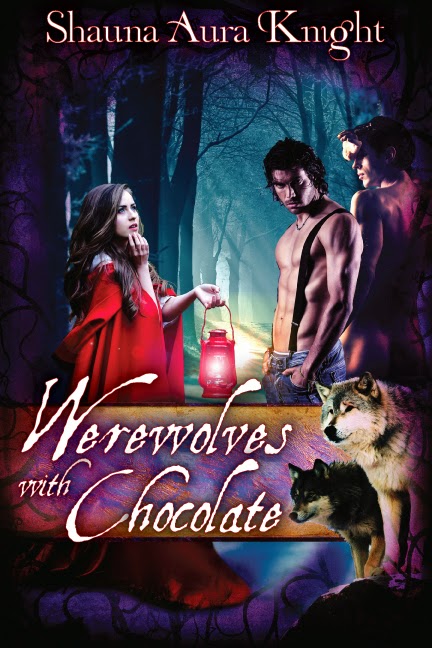 What genres do you write in?
Right now, paranormal romance and urban fantasy, but soon I’ll have some epic fantasy and scifi romance coming out.

Do you have a favorite quote from your book?
“Kyle groaned. ‘If you dress up as Red Riding Hood, Jake and I are completely not responsible for our behavior.’ “

If you write a series do you reread your previous books before you begin the new one?
I do. I want to get back into my characters heads and remember how they talk. Particularly in writing the short Werewolves story I wanted to get back into Jake and Kyle’s banter.

When writing, how do you keep track of timelines, ideas, inspiration and such? By notes on the computer, a notebook perhaps?
For the most part, I can keep plots, timelines, and ideas in my head. Unless we’re talking about one of my epic fantasies which takes place over decades or even hundreds of years, or making up the language they speak. Once I start writing a story it goes into its own document. I don’t write in a linear way, so I write scenes as I’m inspired to. That’s how I’ve ended up with 60 novels partially finished. These days my task is just finishing them!

I’m always looking for book recommendations. What books have you been reading? Would you recommend them?

When Ellie moved to the SpiralStone retreat center to figure out her life, she expected peace, quiet, and spiritual practice. She had no idea that the two sexy men running the kitchen would seduce her…much less at the same time. Kyle and Jake turn out to be wilder than they seem and Ellie finds herself wrapped up in devastating magic. She must choose: stay with Jake and Kyle and risk who she has been, accepting the dangerous world of shapeshifters? Or leave them and risk madness, or worse?

A Very Spicy Excerpt from Werewolves in the Kitchen:

Jake turned the shower on while Kyle kissed her senseless. Ellie threaded her fingers into Kyle’s short blond curls, and suddenly Jake was behind her, untying her shorts. Kyle drew her top up, and she could feel Jake’s bare chest against her back.

She was just in her bra and panties when Kyle released her to pop the button on his jeans. Then he kissed her again, nipping his way down her body.

Jake made an appreciative noise from behind her, and she turned her head. He kissed her, grinding his hips against her buttocks. Distracted by Jake kissing her, she gasped when Kyle brushed his fingers over her mound, rubbing her through her panties. He nipped at her hip, and she felt him dragging her underwear down. She tugged him up and kissed him.

Kyle grinned, placing her hands on the waistband of his jeans to tug them off. Her jaw dropped just a little as his length sprung out. “Oh my,” she whispered.

He drew her to him and into the steaming shower, kissing her. Jake closed the glass shower door behind him; it was just big enough for three. She took them both in before they drew closer.

Jake tipped her head back into the water to wet it before he began lathering up her hair, his fingers massaging her scalp as she blissed out.

Kyle grabbed a washcloth and washed her from shoulders to feet until she shivered. Ellie blushed and protested when his fingers slipped between her folds until she moaned. Jake claimed her lips as Kyle began to circle her pearl where she was slick with arousal. “So wet, baby.”

Jake slid his hands over her body, down to her buttocks, lathering up her back with body wash as Kyle drove two fingers into her pussy.

She cried out into Jake’s mouth at the sensation. She’d never been kissed like this before—the hot water falling on them, Jake’s tongue lapping at her lips even as Kyle was pleasuring her where she’d been swollen and hot for them for so long.

Ellie moaned, thrusting down onto Kyle’s fingers. How many times had she blushed, fantasizing about them doing this to her? She was already on the edge of orgasm from the thrill of having them both totally focused on her pleasure and so many days without release.
Kyle circling her pearl had her gasping for breath against Jake’s lips. “That’s it,” he murmured, stroking in and out.

Their touches finally drove her over the edge. Ellie cried out, bucking, and they had to hold her up as her knees gave. Jake kissed her, and then Kyle kissed her, and she threaded her fingers through both their hair while they murmured sweet things, petting her.

“Feel a little better?” Kyle asked, and she blushed.

“I’ll take that as a yes,” Jake grinned.

She panted, knowing the two of them were not done with her yet.

Bio for Shauna Aura Knight:
An artist, author, and presenter, Shauna’s work is inspired by the mythic stories of heroes, magic, and awakening mythic imagination. She’s a fantasy artist and author of paranormal romance and urban fantasy including Werewolves in the Kitchen, A Winter Knight’s Vigil, and The White Dress, the Autumn Leaves. Her mythic artwork and designs are used for magazine covers, book covers, and illustrations. She also travels nationally offering intensive education in the transformative arts of community leadership, facilitation, and personal transformation, and is the author of numerous articles and books on those subjects.

Thanks very much for hosting me!