Book Spotlight/Giveaway~ A Bite In Time

Don't forget to enter the tour contest at the end of the post and to follow the tour for more chances to enter. You can find the complete tour schedule HERE 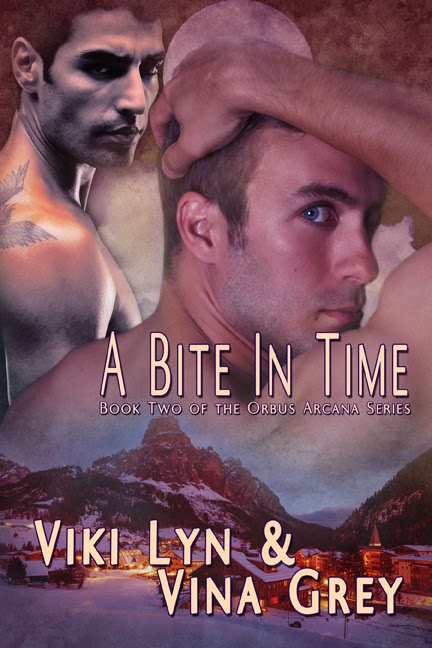 
A dangerous secret, a vampire, plus one sexy cop is a recipe for trouble.

JOHN REEDER has accepted his love for VINCENT KAMATEROS, but he doesn’t know his lover is a vampire. When aderanged vampire targets Vincent, John has to deal with uncovered secrets that blow his life apart.

Will Vincent reveal his true nature to protect the cop who has come to mean more than his own life? In doing so, he might ruin his only chance for a ‘happy ever after’ with John.

“Euro for your thoughts?” Vincent teased as he kissed John’s neck.

“Maybe a dollar. At least I can spend it at home.” John touched Vincent’s face. “I wish we had another day, that’s all.”

John pulled away. “We better get going. Shower first.”

Warmth spread across John’s chest. Shit. He was officially a sap reacting so easily to Vincent’s charm.

Biting his lip, he stood and pressed one hand on Vincent’s shoulder, stopping him from rising. “Alone.” How to explain the need to build back his defenses, so once they returned to Arizona, his relationship with Vincent existed, once again, in the privacy of their homes.

“We’re leaving in an hour,” John added, putting an end to fooling around.

Vincent leaned back on his elbows, his legs stretched out giving John an eye full of what he’d miss showering alone. John ran his hand across his scalp, ogling but not caring.

“More reason for me to shower with you,” Vincent said. “Once we’re home, you’ll stuff me back into the closet.”

The hairs on John’s nape stood as a flint of anger lit in him. Vincent read his thoughts and it was goddamn irritating. Then his shoulders slumped. Jesus. A big, bad cop scared of coming out. It had been a few months since he committed to making their relationship work. He was beginning to trust Vincent completely, and planned to make headway, but damn if he hated Vincent baiting him about coming out.

Didn’t Vincent get it? He didn’t like being pushed against the wall. And yet he had made a promise he would make the attempt. That he wouldn’t let his attitude come in the way of a relationship. To be fair, Vincent held back his impatience, most of the time.

“This has been great,” John waved his hand to take in the room. “But it’s a far cry from Arizona. Julie knows, and I’m going to tell Free, but I’m not ready to tell my peers or my parents.”

No matter how much he craved for an open relationship, once back in Arizona, he’d be Detective John Reeder, straight son of Irish Catholic parents. Sure he’d made slight progress, telling his sister he was gay. But from asimple thing like telling his sister who’d already guessed to coming out to his parents was a long fucking way. Yet, guilt overwhelmed John every time he pulled back from Vincent’s touch in public, the hurt in his lover’s eyes eating at him.

Vincent slipped on his robe, his good-natured teasing vanished. “John, when will you face who you are? A gay man with a boyfriend who loves you. I refuse to be treated as a shameful secret.”

What inspires me - the reality that romance between lovers is a hope more than a guarantee. My stories are an eclectic mix of contemporary and paranormal, but it is always romance that drives the story to its final happily-ever-after. There's nothing better than reading a good book over an espresso, watching a movie or trying out a new restaurant. I'm the author of several gay romances, including Last Chance, Rainbow Award winner for the Best Gay Paranormal/Horror. Viki’s website is http://www.vikilyn.com/;

Vina Grey loves writing about romance. Two people finding each other, the two-step before they get together and the happily ever after, have to be the best story ever. Throw in some paranormal elements and she's in heaven. Vampires and cops, anyone? She loves to jabber away with anyone about books, so drop her a line at vinagrey@gmail.com. Vina’s cyber home is here: http://vinagrey.wordpress.com/

a Rafflecopter giveaway
By DawnsReadingNook at August 20, 2014

Hi Dawn, Thanks for hosting us today! Vina and I have been asking the question - who floats your boat, John (blue eye all american detective) or Vince (dark haired vamp)? The book covers were created by the talented Lex at Winterheart Design. And we can't wait to reveal the third cover in Love's Last Bite, the final arc in John and Vince's story.

HI Dawn, Thanks for hosting us.
Cheers, Vina

I love this cover.