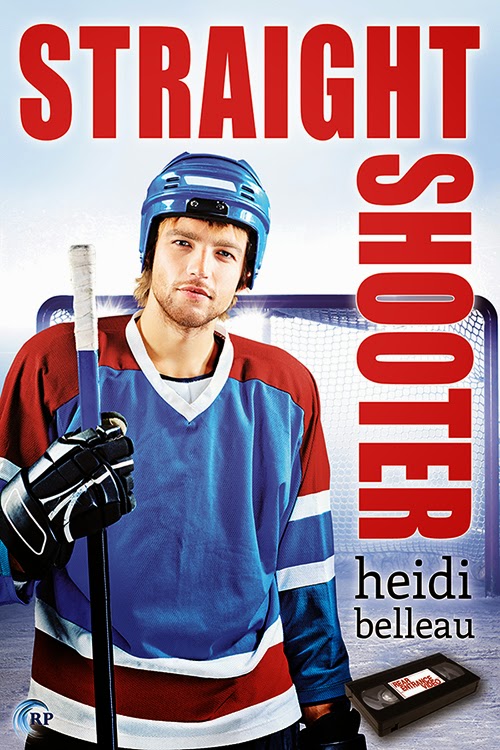 So what’s “humiliation kink”, you ask? Well, just like some people are fulfilled by service (sexual or otherwise), and others are fulfilled by receiving physical pain, people with humiliation kinks specifically derive pleasure and fulfillment from the pain of being humiliated. Being demeaned by your dom verbally: called names and insulted, sometimes using racial, homophobic, or ethnic slurs. Being treated as furniture or a toilet or a subhuman animal. Giving up your right to privacy. Doing embarrassing or private things in public or with an audience.

It’s not right for everybody, but just like with people who enjoy a good paddling, sometimes what from the outside can seem like pain actually—between consenting partners—is actually a source of pleasure and satisfaction.

For Austin, who spends so much time and energy trying to live up to the hockey player ideal, having a loving Dom humiliate him with his worst fears—not being a real man, not being straight, not being virile and powerful and in control—gives him a kind of freedom from himself and society that he’s never found before. The deeper he falls into submission, the safer and more free he feels. His notion of masculinity and how he tries to perform it is strangling him, but with Liam he doesn’t have to play that part. The exact opposite, in fact: Liam forces him to confront and become everything he can’t let himself seem in public.

Of course, with that sense of freedom and safety comes a comfort he’s never known before . . . the kind of comfort that he might just want permanently.

This macho jock has a crooked little secret.

College hockey player Austin Puett is in trouble. Unless he starts treating his flamboyantly gay roommate with respect, he’ll lose his room and his job at Rear Entrance Video. But Austin’s got a not-so-straight secret of his own: nothing turns him on more than insults implying he’s gay—even though he’s definitely not!—and all his old coping methods have stopped working.

But meeting Liam Williams, the real person behind Puck, confuses Austin even more. Liam really seems to like him as a person, and Austin likes him back. And while Gay For Pay’s okay, what does it make Austin if he still wants Liam when the cameras aren’t rolling?

Heidi Belleau was born and raised in small town New Brunswick, Canada. She now lives in the rugged oil-patch frontier of Northern BC with her husband, an Irish ex-pat whose long work hours in the trades leave her plenty of quiet time to write. She has a degree in history from Simon Fraser University with a concentration in British and Irish studies; much of her work centered on popular culture, oral folklore, and sexuality, but she was known to perplex her professors with papers on the historical roots of modern romance novel tropes. (Ask her about Highlanders!) Her writing reflects everything she loves: diverse casts of characters, a sense of history and place, equal parts witty and filthy dialogue, the occasional mythological twist, and most of all, love—in all its weird and wonderful forms. She also writes queer-flavoured M/F as Heloise Belleau.

Comment to win! I’m giving away ebooks one and two of the Rear Entrance Video series (that’s “Apple Polisher” and “Wallflower”) to not one, but two lucky commenters on this tour! All you gotta do is leave a comment on this post with a way to contact you (and if your preferred method of contact is email, make sure to put that in the body of the comment, not just in the blog’s form—I can’t see that info! Each comment counts for another entry in the draw, so be sure and follow the entire tour. Entries close at midnight, Eastern Time, on April 21, and winners will be chosen on April 23rd. Contest is valid worldwide.
By DawnsReadingNook at April 09, 2014

Not my kink, personally, but it does sound interesting. I think I read the first one. Now I have to get the second one and this one. :)

Being a hockey fan, I was really intrigued by how Austin's hockey life and his sexuality play off each other. I'd always been intrigued by the "all hockey players are masochists" phrase I'd heard once, but of course it's not that simple, and the story didn't treat it that way...

Please count me in. Thanks!

Thank you for the giveaway.

Thanks for the comments everybody! This isn't a new kink for me to write, but it was a new angle to explore and it's definitely the first time I really FOCUSED on it versus it just being a side thing to other stuff. Trix, I'm stoked that you as a hockey fan liked it! I knew it was going to be a tough sell, me not being a hockey expert myself (more on that later), so I really hope it was immersive and accurate! :D (and sexy)

I don't think I would care for this kink personally but I would love to read about it. aahickmanathotmaildotcom

I loved the book description, but I like to read my books in order. Hope to get the first two, so I can buy & enjoy "Straight Shooter".

This entire series is on my wishlist. It sounds wonderful!

Humiliation is not a kink I'd want to explore, but when a male character is verbally stripped of characteristics that make him proud as a male (and feminization, in particular)are turn-ons for me.

Put me in the hat please! mevalem258ATgmailDOTcom