Please give a warm welcome to Guy from Weapons of Redemption 1: Whips and Chains by Saloni Quinby today as we sit down and see what makes him tick.

Q: So tell us about yourself. What got you in the cross hairs for your author?

I was born in Greece about two hundred years ago. When I was still a young man, I was captured by the vampire pirate, Tarun, and forced to serve him. During my time aboard his ship, I built a strong friendship with four other captives. When we finally escaped from Tarun, we swore to protect other victims, not only from Tarun but from people like him.

Ryan is a very strong person. When we met, I sensed he had secrets and I was determined to uncover them. Ryan is very smart, not to mention adorable and sexy as hell. He’s a hard guy to resist.

It wasn’t a matter of place, but of the game. We were at Ryan’s house and the game was called first come first serve. Yes, I mean that kind of come. It was a truth game.

Suggest a sexual game that challenges me. I’m partial to endurance tests.

He’s still a young vampire, so lately he’s been obsessed with necks, which is fine with me. I’ll lick, kiss and nip his neck any time he wants.

Q: What was one of the most embarrassing things your author did to you in Whips and Chains?

I lost it when Ryan got shot and I thought he was going to die. It’s kind of embarrassing, loving someone that much and feeling so exposed when you think you’re going to lose him.

Yes. I’ve learned a lot on this strange journey I’ve been on since becoming a vampire. I’m sure my friends feel the same way. The strangest part is what we learned about our vampiric father--the man we hated for so long. But I guess that’s life, right? It’s all about shades of gray.

Thank you Guy for joining us on 'Meet the Character' day here at Dawn’s Reading Nook Blog. You can find all of Saloni Quinby’s books at Changeling Press. 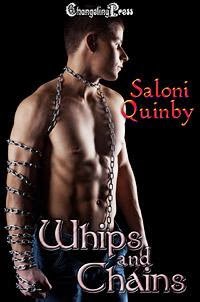 Weapons of Redemption: Whips & Chains
Book One
Changeling Press
Available at Publisher & ARe


Five men, enslaved by a vampire pirate and forced to do his bidding, rebelled against their master and earned the wrath of a monster. Now, while plotting to destroy the man who, centuries later, still thinks he owns them, they use their powers to protect other victims.

In a seedy underworld of sex and violence, a serial killer is stalking men and Guy is called upon to find the murderer. Ryan, a professional Dom known as the Beast Tamer, specializes in meting out pleasure and pain to oversized men. While undercover, Guy and the sexy young man with a mysterious past become lovers, but is Ryan the next victim or is he the killer?


Excerpt from Weapons of Redemption 1: Whips and Chains


This was going to be easier than Guy thought. He smiled. “Agreed. Who goes first?”


“You, of course. I’m a gracious host.” Ryan pushed the timer on his watch and the game began.


While Ryan continued removing his clothes, Guy selected a soft nylon hair flogger. Though he guessed Ryan would stubbornly, even willingly, accept pain, he knew it wasn’t the way to handle him. When they’d fucked, he’d responded well to gentleness -- odd for a man called the Beast Tamer.


Ryan stared intently at Guy and waited for his orders. He understood that right now, Guy was in control, just as Guy knew he would have to submit completely to Ryan when his turn came around.


“Come,” Guy said, placing a hand to Ryan’s lower back and pushing him toward a tile wall. “Up against it.”


Ryan placed his hands on the wall and Guy used his foot to spread his legs wider. With his hand, he caressed Ryan from nape to ass, relishing the warmth of his skin. He traced the old scars on Ryan’s back -- the scars he had said he’d never talk about. Guy intended to see how far Ryan would go with their game. He hoped he’d go all the way. Guy wanted to trust him, but he needed to know more about him first.


He stepped back and brushed the flogger over Ryan’s shoulders and back, a mere kiss at first, then with sweeping motions. He lashed it over his ass and legs, then he stepped closer and followed the same pattern with his hands and lips, then with his tongue. He kissed and licked the back of Ryan’s neck and lapped his ribs, making him flinch when he discovered ticklish spots.

The child of a painter and a psychic dreamer, Saloni Quinby feels spirituality and storytelling go hand-in-hand. She loves the scent of gardenia, the sound of wind chimes and the taste of honey. By listening to what isn't said, she creates works based on unspoken desires. Saloni prefers blurred gender lines and many varieties of romance. In a world where passion must at times be restrained, she believes erotica is a pleasure to be shared. With her stories she would like to make her fantasies yours and hopes you enjoy the ride.

Saloni can be found online at http://kate-hill.com/glbtqhome.html.
By DawnsReadingNook at April 07, 2014

Thank you for having me as a guest!