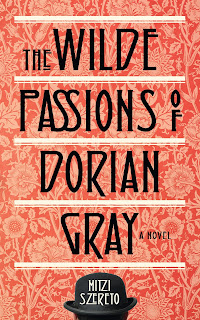 The Wilde Passions of Dorian Gray by Mitzi Szereto

Inspired by Oscar Wilde’s classic novel The Picture of Dorian Gray, Mitzi Szereto’s The Wilde Passions of Dorian Gray continues where Wilde left off with the Faustian tale of a man of eternal youth and great physical beauty who lives a life of corruption, decadence and hedonism. Leaving behind , Dorian’s story begins in the bordellos of Jazz-Age Paris, moving to the opium dens of and the alluring anonymity of . In his pursuit of sensation and carnal thrills, Dorian’s desires turn increasingly extreme as he leaves behind yet more devastation and death. He ultimately settles in present-day , joining forces with a group of like-minded beings known as the Night People. They inadvertently return to Dorian his humanity when he falls in love with a young woman he rescues from becoming their victim. Will she be his redemption? Or will she be his final curse?

Dorian Gray awakens as if from the grave. A great weight presses down on him from above, but when he looks up to determine the cause, realizes it’s his head, which feels so heavy upon the stem of his neck that he expects it to tumble off and land on the crumpled bedding beneath him. Even the air itself is heavy, as if he were trying to breathe through cotton wool.

He blinks several times to clear his vision, the effort of moving his lids far too strenuous an endeavor to undertake without discomfort; the upper lids feel as if cast-iron window weights have been attached to them. The bluish haze that blurs the objects in the lavishly appointed bedroom make him wonder if he has somehow developed shortsightedness as his puffy and burning eyes struggle to focus and make sense of his surroundings. He hears the sound of breaths being drawn in and then released in a steady rhythm that might have been soothing if not for his disorientation. Are they his or someone else’s?

Red velvet draperies cover the tall windows and they move sluggishly in the breeze as if they too, are affected by this overwhelming sense of heaviness that afflicts him. They remind Dorian of curtains in a theater and he expects them to swing open, revealing players on a stage. Instead they reveal irregular chinks of yellow light, which insinuate themselves inside the room, informing him that it’s morning.

The clarity of his vision slowly returns, bringing with it more detail. Embroidered silk cushions lie scattered across the wooden floorboards, as do overturned glasses and random bits of gray ash. The bed upon which he finds himself appears to be a tangled heap of arms and legs, the more slender among them of female origin. They crisscross each other in a haphazard pattern. Arms as white as the first winter snow. Arms as black as polished ebony. Some look as if they belong to the same body, though Dorian knows this to be physically impossible. Lying amid the jumble he detects the gentle curve of a woman’s breast and, unless he’s mistaken, the graceless wedge of a man’s foot.

That Dorian is inside a bedchamber becomes obvious to him. It might be his, though he can’t be certain. He seems to recollect a small man with a pencil-thin moustache and a worn yellow tape around his neck measuring the window frames with extravagant meticulousness, then afterward producing several swatches of fabric, one of which was red velvet. The memory’s returning to him in more clarity now. Monsieur Larouche, the curtain maker. His men finished hanging the red velvet draperies a few weeks ago.

As for the hours that have just gone past, they continue to remain a confused jumble of images in Dorian’s mind, though the fragrant after-scents of smoked opium and female pleasure tease at the edges of his memory like a tickling finger, gradually bringing him back to consciousness.