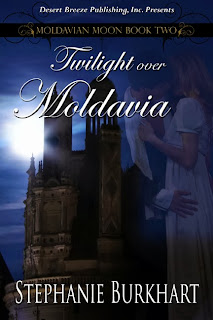 Romanian unification is on the horizon and the spirited Crown Princess of Carpathia, Caroline, would prefer to ride horses and archery to embroidery and dancing. Complicating her life is her recent discovery that she's a witch.

Prince Stefan Sigmaringen travels to Carpathia to meet Caroline. He discovers he has much in common with her. He also learns that a strange man, Timon, has an unnatural interest in him.

Upon Stefan's engagement, he overhears his mother confessing to a horrible secret – she cursed him in order to conceive him and Stefan will become a werewolf when he turns eighteen. There is a condition to overcome the curse, but it will require Stefan to draw on all his inner strength and Caroline, her courage. Can they break the foul enchantment and secure their future or will Stefan give himself over to the lupine curse that haunts his family?

Stefan stepped into the grand room and came face-to-face with the Carpathian royal family.

Stefan took one look at Caroline, and his heart rate accelerated. She was Aurora -- the beautiful outdoorswoman he'd met only hours earlier. She had used her mother's name.

Her cheeks colored fiercely, and satisfaction filled him. Even from this distance, he could feel the same magnetic heat from her he had in the forest.

How different she looked -- how regal. The dress accentuated her curves and made her look decidedly feminine, yet despite her outward beauty, her eyes betrayed not only surprise, but also unease.

She stepped forward, along with her sister, and both curtsied. Stefan bowed.

King Mircea spoke up. "We hope your travel to went well."

"It was a delight to travel by rail," Stefan's father replied.

"Come. Dinner is served." Mircea gestured toward the table along the wall. Caroline stood tall next to her father, a spark of pride in her eyes. Stefan quickly assessed her parents and determined she was a unique blend of both, though she slightly favored her father. They shared the same thick chestnut-brown hair.

"Your Highness, Princess Caroline, I have something that might be yours," Stefan said. She raised an eyebrow.

He reached into his pocket and pulled out her scarf. He'd had the dirt and grime removed so the golden parts of the embroidery glistened in the light from the chandelier. 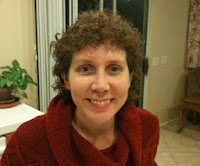 Author Bio: Stephanie Burkhart is a 911 dispatcher for LAPD.  She was born and raised in .  She served 11 years in the US Army and currently calls her home. Stephanie was married in in 1991 and has two young sons. She adores chocolate and is addicted to coffee.  She writes paranormal, contemporary, and steampunk romance and has two children's books published with 4RV Publishing.

FIND ME ON THE AT: 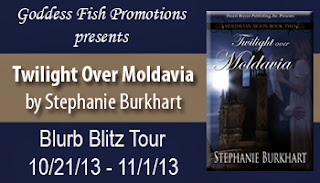 Giveaway Information: Stephanie will be awarding a Coffee & Chocolate bag: a coffee mug, Starbucks gift Card, Andes Chocolates, magnets, and a Lori Powell original book bag (US only) to a randomly drawn commenter during the tour.

Remember to follow the tour and leave additional comments; the more you comment, the better the chances of winning. The tour dates can be found here: http://goddessfishpromotions.blogspot.com/2013/09/virtual-blurb-blitz-tour-twilight-over.html

Thank you so much for having me here today. It's actually a bit gloomy and overcast where I'm at in So Cal. Usually on days like this, I like to burn candles. Where do you like to get your candles at? What are some of your favorite scents you like to burn?

I love the sounds of this story. It really sounds fascinating.

I love Yankee Candles and I love melting tarts in my tart warmers.
I love pumpkin scents.
Thanks for the chance to win!
natasha_donohoo_8 at hotmail dot com

Mom Jane, thanks for stopping by.

Natasha, I love the tart warmers, too.

I'm playing catch up today! I missed a few days of the tour but I'm getting my blog on now! Good to see you again!