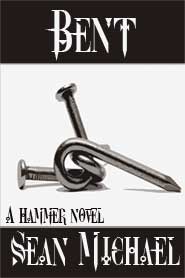 Marcus and Jim are getting Hitched, and you're invited!

A long time ago in a galaxy far far away... okay, so it wasn't that long ago, and it was right here at my computer, I wrote a short story featuring Peter and Samuel from the Between Friends books (http://www.torquerebooks.com/index.php?main_page=index&cPath=116_130_118) that featured a brief appearance of Marcus and Jim. They were throw away characters, right? Just a leatherworker and his boy that Peter and Sammy visit to pick up a leather flogger.

You can read that original short story as a freebie on my website: http://www.seanmichaelwrites.com/books/testingleather.html

Anyway, so after I wrote that story, Marcus and Jim insisted they had the best beginning ever and I started writing. When I hit 120000 words, I knew I had to find an end to the story, for now, anyway. There is a second novel in Marcus and Jim, I just haven't found the time to write it yet (and once I do, the story of how Jim and Tanny became best friends will also get written.)

Bent (currently on sale at Torquere Press: http://www.torquerebooks.com/index.php?main_page=product_info&cPath=97&products_id=1392) will be coming out in a special hard cover edition in September!

Now, one novel, lost of guest appearances and many shorter stories later, Jim and Marcus are getting married.

I was doing little bits of fun stuff to post on my livejournal for Valentine's Day and as I was wrapping it up, I wrote this (dictating straight from Jim):

Jim hands Marcus a tiny box Happy Valentines
Marcus: What's this baby? Marcus turns it over in his hand
Jim: Your present.
Marcus opens it to find a black sapphire ring Oh, baby. It's beautiful. Thank you.
Jim: Marry me?
Marcus stares and his smile slowly gets bigger and bigger: Yes.

I couldn't leave it there, could I? So Hitched happened :)

In lieu of gifts, Jim and Marcus would like donations made to your local GLBT youth organization.

But you know, if they were to register it would be at a custom tools manufacturer and a sex toys shop. After all, you can never have too many tools or too many sex toys.

So from bit players in a short story to the founding characters of one of my longest standing series, I am pleased to celebrate with Marcus, Jim and their friends as they make it official!

The proposal was the easy part, but can Marcus and Jim survive planning the wedding?

Jim asked Marcus to marry him on Valentine's Day and his master said yes. That should have been the hard part, right? Jim goes into full perfectionist mode, though, wanting everything to be just right for his master, and soon he's stressed and unhappy.

When the planning also interferes with Marcus and Jim's usual routine, miscommunication and misunderstandings follow. Is a wedding really worth all the aggravation?

Marcus went into the Hammer, giving Billy a nod and a smile before turning to Paul behind the bar. "A draft, boy. And I don't care what kind as long as there's a lot of it."

He went over to Billy's table and sat with a sigh. "Is it too late to elope?"

"If I buy you two tickets to somewhere, would that work?" Billy offered immediately.

"Only if you want our boys in jail for murder."

Jim and Tanny were having far too much fun planning this whole wedding thing out.

"Yes, but I might get laid again." Billy sounded incredibly morose.

Marcus put his head back and laughed. Billy threw a napkin at him.

"You're forgetting that you're the master, Billy. You should be able to get laid when you want to."

"You know I do, I sitting right beside you. I'm not sure that we actually need all the traditional things, but Jim said we should have them because we can. I suppose he has a point." For them to be able to get married had not been a right for very long.

Billy waved his hand. "Yeah, yeah. Note that and I will simply take ourselves to ."

Marcus' eyebrows went up. "Did Jim's proposal spawn one from your boy?"

"No, but I am not interested in six more months of drama and planning and worry. So if it happens, that's what we're going to do. No arguments, no discussion, just go."

"Three months," Marcus corrected. "And yes, the drama has been crazy"

The boys had gone a bit overboard, planning all the details and obsessing over everything. But they were having fun doing it, Jim so animated over each thing.

Billy grinned. "So, I hear you're in charge of the honeymoon."

He shot Billy a look. "I am, and it's a secret." He was taking Jim to a private island. Just them and discreet servants to cater to their every whim. He wasn't letting Jim get dressed the entire time they were there.

"Nope. It's a secret." And if he told Billy and Billy told , then Jim would know, too.

"Are you saying you don't trust me?" Billy's hurt look was patently false.

"I would never say that -- I'm saying I don't trust anyone." He winked.

"Dork." Billy chuckled softly, but nodded. "So, today they're... looking at caterers?"

"Yes. I begged off and went to the florist instead. I just couldn't face a set up like at the cake place. We must have tried what? Fifty different cakes by the end of it? Can you imagine that with the entire meal?" He hadn't eaten for two days after the cake sampling. Marcus glanced at his watch. "They should be done and headed this way by now."

"Excellent." Billy met his eyes. "I need my boy, Goodfellow. I'm taking him from Jim, for the entire weekend."

Marcus nodded. "I think everyone needs a break from wedding planning. Even if we have to tie them down to make it happen."

"Especially if we have to tie them down," corrected Billy.

"I love that sound, Master." Jim kissed his temple.

"Baby!" He wrapped his arm around Jim's waist and raised his head, searching for a kiss from his boy.

Jim kissed him happily, eagerly, and fuck, that was amazing.

As the kiss ended, he could see Tanny greeting Billy.

"So were you boys successful?" Please tell him they could cross a line out on the catering item.

Thank you very much to Dawn for the opportunity to reminisce about how Jim and Marcus began to where they've arrived.

Thank you for hosting me today, Dawn :)

This was a great reminisce. Thanks Dawn. Thanks Sean. I too remember when Bent came out. I hadn't met Jim and Marcus before Bent.