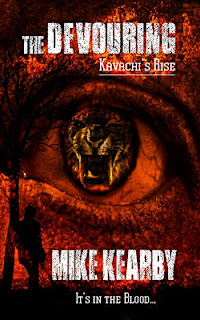 Welcome to my Nook, Mike Kearby Please make yourself at home and let my cabana boys/girls get you a drink.

What’s the first thing you did when you received word you’d sold a book?

The first thing for me is an utterance of pleasure: usually – “Yesss,” but I have been known to shout out, “All Right” or “Okayyy.” After all of that, my wife and I usually celebrate by heading for a favorite restaurant.

Tell us about your latest/upcoming release. What inspired it?

The idea for The Devouring came while sitting at a red light in . Glancing around, I saw a funeral home on the corner of the intersection and was immediately struck by the thought - if I were vampire, that’s where I’d hang out. I’m sure every writer in the writing world can relate to the fact that once an idea invades your mind, it will not leave until you write the story. So, The Devouring was born. Plus, I felt it was time to “evolve” the vampire story from the undead to living creatures that were an apex predator.

If one of your books became a movie, which celebrity would you like to star as your characters?

Funny you should ask that because my seventh novel, Long Term Parking, was actually optioned in 2011. Filming begins May of 2013 in . Back to your question, I always figured Danny McBride would be perfect in the role of the book’s ‘Noir Private Eye’, Nightly.

What genres would you like to try writing in but haven’t yet done so? Why?
I would like to delve into the Mystery / Thriller genre. I haven’t tried so yet, as it seems, publishers and fans want continuations of my current titles.

I am a morning person, so I am typically at my desk at . I try to produce 5 pages a day. At whatever time in the morning those 5 pages are completed is when I stop writing that day. After lunch, I typically spend an hour editing the morning’s writing.

Where do you get most of the ideas for your stories?

I think like most writers, ideas pop-up from observing everyday life. Ideas can come from reading a newspaper article, or seeing a couple argue in a grocery parking lot, or even stopping at a red light and glancing at a funeral home.

What are some of your hobbies/favorite past times to indulge in?

We live in the country, so most of my free time is spent tending to livestock, taking care of the garden, or riding my horse, Katy.

Who are some of your favorite authors, and if we were to visit your home, what books would we find on your bookshelf, end table, floor or e-reader?

The author who really got me interested in reading and later writing was Ray Bradbury. I have a nice collection of his stories. But, I read from a number of genres and enjoy authors such as, Ian Banks, David McCullough, Richard Laymon, Robert Parker, Deborah Crombie, and lately, Jeremy Robinson.

If you could be any character of any book or movie, who would you be?

It would have to be Atticus Finch in To Kill a Mockingbird.

Do you have a favorite TV show you can't miss?

I am hooked on Strike Back on Cinemax. I record every episode. Like a good book, it has the perfect balance of action, suspense, and sex.

What is your writing process? Do you outline, fly by the seat of your pants or a combination of both?

I am a ‘fly-by’ kind of guy. I have many writer friends who plot or outline the entire story before they begin writing, but for me, that approach stifles my creativity. And-it is inevitable in my writing that one character always ends-up hijacking the story and demanding more reader face-time. So pre-scripting is out of the question. My method is quite unorthodox. Once the storyline idea arrives, I may spend weeks writing the book in my head: never putting a word on paper. After I have the basic story goal set-up; I write a chapter or scene in my head each night before I go to sleep. When morning comes, I get up and put the previous evening’s chapter into my Word doc. Like I said, unorthodox, but it works for me.

Could you tell us about any work-in-progress, current projects, what we can expect from you in the future?

I am currently working on two novels simultaneously. The first is the second book in The Devouring series entitled: The Devouring~Annihilation. The second is private eye story involving a 70 year old returning to the work force due to the financial meltdown and loss of his retirement monies. Aptly enough, the character’s name is Les Danger.

My half-man, half-dog detective, Boston Nightly, whose only goal in life, and death, is to have a property on the ocean. My most challenging character would be Kavachi in my latest novel, The Devouring. Kavachi is a deadly predator, domesticated by the U.S. government for sixty years, then returned to his feral self. It was challenging keeping the two POV’s understandable for the reader.

What do you do to unwind and relax?

I really enjoy long walks around the property, and seeing my grandchildren.

What is the last line of your last WIP you worked on that you wrote?

Amador Ordonez was thinking he had never seen someone’s tongue cut from their mouth before when it occurred to him that the tongue lying on the floor mat of his pick-up was his own.

Thanks for taking the time to be here today. I wish you many sales and wonderful reviews.

My pleasure and Thank you!

A Dark Secret. Thomas Morehart and his sister, Kara are vampyre, not the undead, but creatures evolved over hundreds of thousands of years to mimic their prey, man. Then - rescued from a Nazi Prison Camp, Thomas and Kara are brought to the U.S. and forced to work inside government-owned mortuaries. Now -betrayed by the government sixty-seven years later, Thomas and Kara are in a race against time to transform back to their feral states or risk Exsanguination by government sanctioned hit squads.

Nikolai stared across his left shoulder, down the rows of barracks where the camp’s prisoners were being assembled. The 48th had found only a handful of them, yet intelligence had said there would be thousands. Reports had indicated as many as twenty thousand. He turned back to Death.
“Where?” he asked.
Death lifted his chin toward the camp entrance. “There,” he whispered. “Only a short way from the death gate. Toward the sea.”
Nikolai looked past the gathered prisoners and through the opened gates of the camp. Pine and aspen lined the road for as far as he could see. He turned back, questioning, “In the woods?”
“In the ground.”
Nikolai frowned. “Can you show me?”
Death shook his head. “I prefer here. It’s very bad luck to go to that place.”
“Why?”
Death began to rock again. “It’s a madhouse filled with all kinds of madness.”
Nikolai studied Death’s face. “Then you’ve been there?”
Death wagged a finger in Nikolai’s direction. “Oh, I went there once. It might even have been twice or maybe three times. I can’t be sure, for the madness takes away one’s sensibility.”
“And your job there?”
“I helped push the carts back to this camp.”
“Back? What had been on the carts before?”
“Creatures.”
“And when you returned?”
“Shoes…and pyjamas…and hair.”
“And what of those who once wore the shoes and pyjamas and hair?”
Death rested his chin against his knees once more and resumed his monotonous cantillate. Then, just as quickly, stopped. It looked up at Nikolai. Its pupils contracted. “Porrajmos!”
Nikolai narrowed his eyes and pinched his bottom lip between his thumb and forefinger. His gaze darted back to the front gate and to the forests outside. “Are you saying violate?”
Death’s face twisted. He screamed again, “Porrajmos!”
Nikolai shook his head and released his lip. “To open? To open one’s mouth?”
Death stopped rocking and stared ahead, rigid. His pupils dilated back to their dead state. He exhaled a short breath and then pushed his right index finger into a spot just below his right ear and directly above his jawbone. He held his finger in the spot for several breaths, as if to make sure Nikolai understood, and then slowly dragged the finger down his neck to his collarbone.
Nikolai watched, fascinated at the visual. “Rip open?” he uttered.
Death shook his head, exasperated, exhaled a rattling breath, and motioned with an outstretched finger for Nikolai to lean close.
Nikolai stooped forward and turned an ear toward Death’s mouth.
A gush of stagnant air rushed from the man’s lips and flowed across Nikolai’s cheek and nose.
Nikolai jerked away from the dead gas — and from the two words that had drifted on the offensive fumes. He sucked in a quick breath and jerked the pilotka from his head.
Death nodded blindly, as if pleased, and then started rocking again.
Nikolai could only stare at the living corpse swaying in front of him.
Porrajmos.
Such a simple word.
And when translated into Russian, two words: The devouring.