Release Blitz: A Lair So Royal by Zoey Ellis 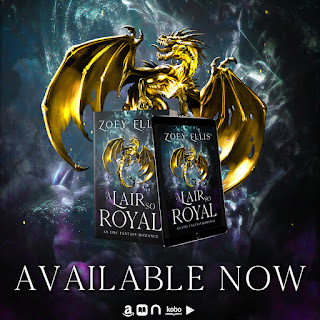 His craving for her consumes his every moment.

A Lair So Royal, the heart-pounding conclusion of The Last Dragorai Series from author Zoey Ellis, is now available!

Start the adventure with A Lair So Sinful! 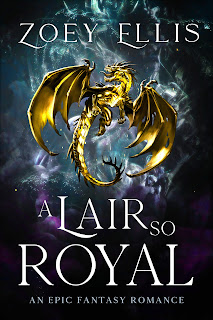 As head of a celebrated dragonlord clan, Khyros led his brothers to victory and survived the war that almost wiped his kind from existence. Proud and powerful, he is the epitome of a dragonlord… until his dragon disappears.

For over a century, he has tried to find him, but continuing on without his bonded dragon has fractured his existence.

Finally, with the help of his clan, he locates his dragon and is shocked to discover a beautiful, fierce female blocking his path.

Instinctively they clash…a frenzied attraction simmering between them.

But Azenyah refuses to answer his questions and explain her involvement.

Furious, Khyros keeps her captive, determined to punish her for the century of suffering she has caused.

And his fury ignites carnal infatuation.

Soon she is the new source of his torment. Yet his silent prisoner refuses to submit – neither to his demands nor his primal attentions.

But her own desires betray her.

As his clan faces a threat that could destroy them, Khyros discovers that Azenyah holds the secrets to save not just his clan but the entire realm.

Balancing the fine edge between his responsibilities to his clan and his newfound obsession, he refuses to end her captivity, determined to get the answers he has demanded.

His craving for her consumes his every moment.

Until he is forced to contend with a power she wields that rivals his own.