Book Spotlight/Giveaway: She’s the One Who Thinks Too Much (Book One of the War Stories of the Seven Troublesome Sisters) by S.R. Cronin

Discover the world of author S.R. Cronin in She's the One Who Thinks Too Much, book one in an exciting new series. Also don't forget to enter the giveaway from the author at the end of the post for a chance to win a $25 Amazon/BN gift card during the tour. All tour stops can be found here and this tour is sponsored by Goddess Fish Promotions.
She’s the One Who Thinks Too Much (Book One of the War Stories of the Seven Troublesome Sisters) 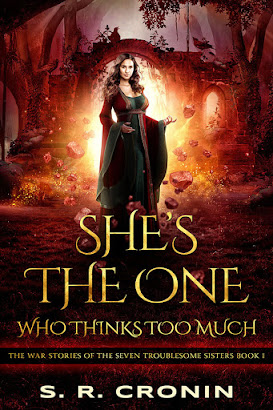 It’s the 1200’s, and the small realm of Ilari has had peace and prosperity for generations. That doesn’t mean everyone is happy, however.

Ryalgar, a spinster farm girl and the oldest of seven, has always preferred her studies to flirtation, yet even she finally meets her prince. Or so she thinks, until she discovers he’s already betrothed. Embarrassed, she flees her family’s farm to join the Velka, the mysterious women of the forest known for their magical powers and for living apart from men.

As a Velka, she develops her telekinesis and learns she has a talent for analyzing information. Both are going to come in handy. For she’s continued to meet her prince at the forest’s edge, thinking being his mistress isn’t such a bad deal. Then she learns more about his princely assignment. He’s tasked with training the army of Ilari to repel the feared Mongol horseman who’ve been moving eastward for years, killing all in their path. And, her prince is willing to sacrifice the outer farmlands where she grew up to these invaders, if he has to.

Ryalgar isn’t about to let that happen.

She’s got the Velka behind her now, as well as a multitude of university intellectuals, a family of tough farmers, and six sisters each with her own unique personality and talents.

Can Ryalgar organize all that into a resistance that will stop the Mongols? She thinks she can.

Sulphur was the sort of woman everyone stared at. She was half a head taller than most and long ago she’d cut her hair into a short mane of bright gold.  She had a robust woman’s figure, a man’s muscles, and her directness served to make others try to impress her. The Velka were no more immune to her allure than most, and I had to smile at the number of women who’d never approached me before, but now were anxious to sit at my table for dinner.

The first night, I brushed away several invitations for the two of us to join others in various common areas. I wanted to talk to my sister. By myself. However, when it became obvious Joli wanted to come back to my room with us, I couldn’t say no. Joli was becoming the best friend I had here; the least I could do was let her be part of this visit.

So, the three of us poured ourselves sweet late-evening amber wine to sip on for dessert and settled into the chairs in my room. Joli was courteous enough to let Sulphur and I cover the basic family news without interrupting us. When I moved on to telling Sulphur of my ongoing dalliance with the otherwise-engaged Nevik, her reaction surprised me.

“Could you have been luckier?”

“You think falling in love with an already-betrothed man is lucky?”

“What if he hadn’t been? Can you imagine you, a smart lady, primping and preening around the royalty of Pilk for the rest of your life? Think about it, Ryalgar. You’d be miserable. Probably make him miserable too. The princess that got stuck with him has done you a huge favor.”

I hadn’t quite looked at it that way.

S.R. Cronin will be awarding a $25 Amazon or B/N GC to a randomly drawn winner via rafflecopter during the tour. 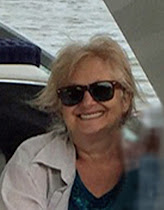 Sherrie Cronin is the author of a collection of six speculative fiction novels known as 46. Ascending and is now in the process of publishing a historical fantasy series called The War Stories of the Seven Troublesome Sisters. A quick look at the synopses of her books makes it obvious she is fascinated by people achieving the astonishing by developing abilities they barely knew they had.

She’s made a lot of stops along the way to writing these novels.  She’s lived in seven cities, visited forty-six countries, and worked as a waitress, technical writer, and geophysicist. Now she answers a hot-line. Along the way, she’s lost several cats but acquired a husband who still loves her and three kids who’ve grown up just fine, both despite how odd she is.

All her life she has wanted to either tell these kinds of stories or be Chief Science Officer on the Starship Enterprise. She now lives and writes in the mountains of Western North Carolina, where she admits to occasionally checking her phone for a message from Captain Picard, just in case.

By DawnsReadingNook at September 18, 2020

Thanks for having me here today!

Happy Friday! Thanks for the great post, I enjoyed reading it :)

Good evening! My question for you today is, are you a spontaneous or a scheduled writer?

I appreciate getting to read about your book. With sisters and daughters who love to read, this helps so thank you.