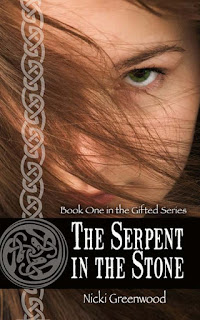 THE SERPENT IN THE STONE
(The Gifted Series, Book One)
Paranormal Romance
The Wild Rose Press
New in audiobook! Click here to order!

Sara Markham is used to secrets. She has two of her own: her paranormal powers, and her father's unsolved murder twenty years ago. The first is a secret she can't divulge, and the other she yearns to unravel.

When her archaeology firm is tapped to excavate a ruin in Shetland, Sara accepts eagerly, hoping it will help solve the mystery of her father's death. But she doesn't anticipate Ian Waverly, a wildlife biologist whose questions worry her even as his rugged magnetism fascinates her. Ian's more connected to her gifts than she knows, and far more than he wants to admit.

Enemies on sight, Ian and Sara struggle to fight the attraction that blazes between them. But when they are confronted with a decades-old web of lies and corruption, they discover the truth: only together can they heal the heartaches brought by the very darkest of secrets.

Excerpt from THE SERPENT IN THE STONE:

Alarm bells clanged at the hostility in his voice. Sara had to force her voice past them. "You've seen me shapeshift. I can read minds sometimes."

"I've got time for the long version." He put the necklace back into his pocket. The shuttered look on his face raised panicky flutters in her belly.

She drew a long breath. "Telekinesis. I caught you with telekinesis."

"How did you get telekinesis?"

"It's not like they hand it out in stores! It just happened one day. I didn't know what it was, and I was too scared to tell my parents. I was afraid of it for a long time."

"When did your father die? How did he die?"

Her thoughts flew to the amulet in Ian's pocket. "What has any of this got to do with my father?"

"Maybe nothing. Could be more. This stuff might be genetic."

Icy dread crawled across her skin. "I'm done talking to you."

Quick as lightning, he reached forward and snatched the boat keys from the ignition. "This necklace has to be important if you're willing to risk being shot to fix it, Sara. That's not even going there about you risking me being shot at. You're not getting it back until you talk."

She felt naked. Worse than she had at the inlet. Then, she'd seen desire in his eyes.

"Never mind me," he snapped.

"How did your father die?"

Pain and betrayal surged anew through every cell in her body, and that little girl from twenty years ago gave a silent wail of outrage. "He. Was. Murdered." 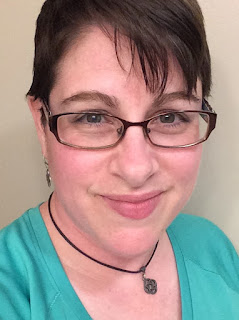 Nicki Greenwood graduated SUNY Morrisville with a degree in Natural Resources, which of course has nothing to do with writing novels. She has also worked in a bakery, an insurance agency, a flower shop, and a doctor's office, which have nothing to do with writing, either. She did spend an awesome two years as an assistant editor for a publisher, and now does freelance editing on the side. Nicki still holds down a day job, which manages to get her out of the house once in a while. Since 2010, she has written eight novels, including the award-winning Gifted Series.

Nicki lives in upstate New York with her husband, son, and assorted pets. If you can't find her at her computer, you can always try the local Renaissance Faire.
Visit Nicki for news, reviews, excerpts, book trailers, and freebies at http://www.nickigreenwood.com.
By DawnsReadingNook at November 11, 2019

Thanks so much for visiting me today! I hope all of you get a chance to cozy up with a great book. Happy Reading!