Welcome one of my favorite people and a wonderful author, Andrew Grey, to the Reading Nook blog. He has a new book out called Twice Baked that is absolutely delicious. *grins* So without further adieu, take it away Andrew.....

Twice Baked – My story as a picky eater

I am a picky eater.  There is no way around that.  My poor husband will tell you that… heck he’d tease me about it during the conversation, I’m sure, but he does it out of fun.  Growing up I was teased at home because of the things I didn’t want to eat and everyone else did.  So a while ago, I decided to write about it and the result is Twice Baked.

I’ll let you in on a secret.  The things that Luke doesn’t like are all foods I don’t.  I put a lot of myself in him.  For example, I can’t stand bananas in any way.  I think they have one and only one use… sex ed class.  So imagine if, like Luke, I were tasked with judging a television cooking contest.  Yeah, Dominic got a kick out of it too. 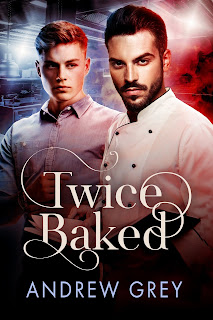 When the pickiest eater in America is tapped to judge a cooking competition along with his chef ex-boyfriend, will it be a recipe for a second chance… or disaster?

Luke Walker’s humor about foods he can’t stand made him an internet celebrity and his blog, The Pickiest Eater in America, a huge hit. He plans to bring that same lighthearted comedy to the show—but he won’t be the only host.

Meyer Thibodeaux might be a famous chef, but he’s solemn, uptight, and closeted. He’s also Luke's ex. As different as they are, the sparks between Luke and Meyer never really went out, and as they work together, each begins to see the other in a new light, and the passion between them reignites, hot as ever. But secrets, gossip, and rumors on the set could sour their reunion.

Andrew grew up in western Michigan with a father who loved to tell stories and a mother who loved to read them. Since then he has lived throughout the country and traveled throughout the world. He has a master’s degree from the University of Wisconsin-Milwaukee and works in information systems for a large corporation.
Andrew’s hobbies include collecting antiques, gardening, and leaving his dirty dishes anywhere but in the sink (particularly when writing)  He considers himself blessed with an accepting family, fantastic friends, and the world’s most supportive and loving partner. Andrew currently lives in beautiful, historic Carlisle, Pennsylvania.
Author Links
Amazon Author Page
Barnes and Noble Page
Dreamspinner Press
Facebook
Facebook Group All the Way with Andrew Grey
Goodreads
Twitter @andrewgreybooks
Website

My brother was a picky eater. He always dissected every piece of meat on his plate, looking for 'things.' Ironically, he grew up loving to cook and try new recipes. Best wishes. Love your books.