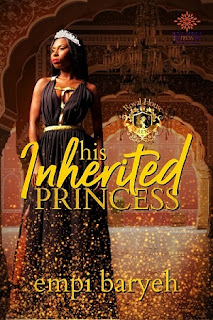 Thanks for stopping by to talk a little about your writing! Let's jump right in. When did you begin writing and why?
I started writing around the age of thirteen when stumbled on a YA story my older sister had written. I got engrossed in it. Guess my disappointment when I discovered it was unfinished. I decided to complete it just to see how it ends. I’ve been writing on and off ever since.


Do you have a favorite genre? Is it the same genre you prefer to write?
I like romance and women’s fiction; or anything. Really - as long as there’s an element of romance.


Do certain themes and ideas tend to capture your writer’s imagination and fascinate you?
Oh yes. I have a thing for virgin heroines and secret babies. I also love Royal and Sheikh stories.


How do you balance long-term thinking vs. being nimble in today's market?
I’m not exactly nimble. I find it hard to switch off my internal editor,so I tend to take longer completing my first draft. The advantage, though, is that my first draft tends to be quite close to what I want the story to be. What I’m learning to do to strike a balance is to write as often as possible - daily, if I can swing it. The more I write, the quicker I’ll complete whatever I’m working on.


How do you find readers in today's market?
Readers come from everywhere. I’ve joined many reader and writer groups. If I see someone reading a book or I’m in a social setting, like a party, I sometimes strike a conversation and chip in a pitch (I write romance etc.).


Do you come up with the hook first, or do you create characters first and then dig through until you find a hook?
I’ve done both. Depends on how the story idea is developed. I tend to come up with ‘what if’ scenarios. For instance, my book, FOREST GIRL, came up after I wondered about arranged marriages and why most books and movies tell the story or a woman forced into it (at least in the African setting). And I thought ‘What if it’s the man forced into and arranged marriage? How would that even work?’


On the other hand, for HIS INHERITED PRINCESS, the heroine was already created and I had to develop the hook.


How do you create your characters?
Since I often start with the story idea, I think of the kind of person who could get in such a situation. However, there are times I’ve chosen to write about a character because I found him/her interesting as a secondary character in one of my books. My upcoming release, EXPECTING TY’S BABY, is an example. The hero and heroine were secondary characters in the book 1 (Chancing Faith), and I found them really interesting, so I decided to pair them and see where that leads us.


What's on the top of your TBR pile right now?
It was my goal to read more diverse book this year, and I haven’t been as successful as I’d hoped, so I have a bunch of stories on my TBR list. To begin with:


Princess India Saene is a modern-day princess who advocates for women’s rights across the continent. She’ll do anything to protect the people she loves. Devotion to her country leads her to agrees to a marriage alliance with a neighbouring kingdom, but things don’t go as planned.


My hero, Sheikh Omar El Dansuri is one of my favourite heroes. He’s an alpha male with a strong sense of right and wrong. He finds himself suddenly thrust into the position of future king and husband to his late brother’s wife. He is determined to bring his brother’s killer to justice. However, he finds himself in a bind when evidence points to India as the culprit.


Where’s the story set? How much influence did the setting have on the atmosphere/characters/development of the story?
The story is set in the fictional kingdom of Sudar, situated in the sahel region of West Africa. The setting made it possible to pool and explore some deep-set traditions in Africa, e.g. wife inheritance, which I mentioned earlier.


If you had to write your memoir in five words, what would you write?
I am simple, yet complicated.


How often does your muse distract you from day to day minutiae?
Always. Since I was a kid, I’ve always had half on my head in the clouds, thinking and dreaming up stories. Meaning, my muse is quite active and whispering in my ears all day.


What do readers have to look forward to in the future from you?
Three stories in my immediate future, which I’m really excited about:


I have a novella, A VALENTINE AFFAIR, coming out February 11 as part of Love Africa Press’ Valentine anthology.


I also EXPECTING TY’S BABY, a standalone sequel to my book, Chancing Faith, coming out in Spring this year from Black Opal Books.


The third is another instalment of the Royal House of Saene series (no release date yet). 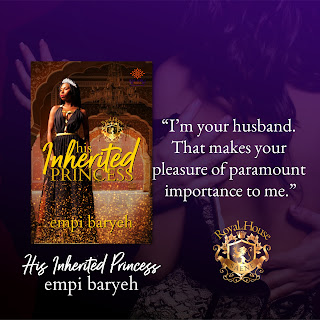 Book blurb
India Saene, Princess of Bagumi, must enter a marriage alliance to save her kingdom from an economic crisis. Tragedy strikes when her husband of a few hours is killed in an accident on the way to their honeymoon. She recovers from a coma two weeks later to discover she has been inherited by her husband's younger brother!

Sheikh Omar El Dansuri has never wanted to be king, nor does he desire a wife. However, when his older brother dies, he not only becomes the future king of Sudar, but he also inherits his brother’s bride through an age-old tradition. Falling for the headstrong India is out the question especially when evidence points to her as his brother’s killer.

Neither India nor Omar wanted this marriage, but the passion that burns between cannot be denied. When India’s secret is revealed, will either of them survive the consequences?

Excerpt:
Her gaze dropped to his lips—generous, well-defined lips that looked chiselled; yet, she remembered their softness when he’d pressed them against her temple the other day. She shook her head. She may have gotten a clean bill of health, but the accident must have screwed with her mind, making her more vulnerable to his special brand of allure.

“Salma tells me you haven’t had your coronation,” she said, more to give her mind something else to focus on.

He paused, but before he could answer, Salma cleared her throat. “I’ll take the flowers to the head nurse now, My Lady.”

When her PA had left, she took in a breath and returned her gaze to Omar who stood only a couple of feet away. Funny, his brother had been taller, but she’d never had the sensation of being drowned by him. Next to Omar, however, she felt like a delicate little flower. He seemed to tower over her, large and immovable.

“Isn’t the stipulation for your coronation that you marry first? Which, according to you, we are.”

“I assure you, India, we’re married,” he said. “However, in Sudari tradition, marriage is only confirmed through consummation.”

Her eyes widened, and she nearly choked on her own saliva. It took every ounce of effort to keep her mouth from gaping. “Wh—what?”

She’d read about cultures where newlywed couples had to make love in the presence of family elders to confirm they’d slept together. She’d never imagined such a thing would still be practiced in the twenty-first century.

Clearly, she should have done a more thorough investigation about Sudar before agreeing to marry into their royal family.

“Your family expects to witness your first night with your bride?”

With a casual wave of his hand, he replied. “Of course not. That would just be primitive.”

He spoke with a mild French-ness to his ‘r’. It was sexy as hell. Try as she might, she couldn’t squelch the images it pushed into her mind; images of being slowly undressed by Omar, of his hands and lips running lightly over her skin, of succumbing to his virility, allowing him to do the things his one kiss had put in her head.

The flames burning her face cascaded over the rest of her body. She fought to calm her erratic heartbeat. “How would they know we’ve consummated?”

“Nothing you’ll be uncomfortable with,” he replied. “It would suffice that you and I spend the night in the same bedroom.”

“Even if we don’t, erm…consummate?”

Had someone switched off the AC?

His right brow hooked up. “Are you against…consummation?”

Was that a smile? Did he think this was funny? Time to shake off the deer in headlights sensation and take charge of this situation.

She swallowed. “Of course not.”

She raised her brows.

“When you’ve had me, I want you to know the difference.” His eyes gleamed. “Tell me, Princess India, have you had an orgasm before?”

Her eyes widened, but she stopped short of gasping at his audacity. “I don’t see how that’s relevant to you.”

“I’m your husband. That makes your pleasure of paramount importance to me.”

“Since I didn’t agree to or participate in a wedding with you, I’d say you’re getting way ahead of yourself, Omar.”

He leaned forward, and she began to tingle all over. Though he hadn’t touched her, she could feel his heat radiating into her. She stopped breathing for a couple of seconds. Did he mean to kiss her? Exert some dominance over her? Why didn’t the idea fill her with righteous indignation?

“Aren’t you even a little curious about the notes I can make you sing with just my tongue?”

A smile of pure male satisfaction came to his lips at her sharp intake of breath. God, she was in trouble.

Determined to have the last laugh, however, she squared her shoulders. “Not in the least.”

“Given the way the soft skin at the base of your lovely neck is pumping, ya jameel, I call bull.”


I’m an author of sweet and sensual African, multicultural and interracial romance, which happens to be my favourite genre of romance to read. My interest in writing started around the age of thirteen after I stumbled upon a YA story my sister had started. The story fascinated me so much that, when I found out it was unfinished, I knew I had to complete it. Somehow the rest of the story began to take shape in my mind and I’ve been writing ever since.


I live in Accra, Ghana, with my husband and our two lovely kids.


I love to hear from readers and aspiring authors.

This is simply wonderful. Congrats Empi.