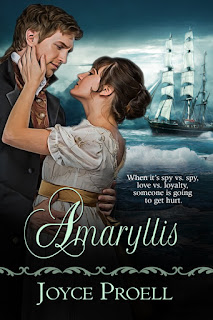 When it’s spy vs. spy, love vs. loyalty, someone is going to get hurt.

Lily Fitzhugh is desperate to get to America when her father is imprisoned as a traitor against the Crown. To gain passage, she accepts a dangerous job: To sneak aboard a ship headed to New York and spy on suspected colonial patriot Griffin Faraday.

Griffin Faraday doesn’t have time for a beautiful, tempting stowaway—especially one he can’t trust. He has a secret shipment of guns to deliver to General Washington and the Continental Army. Nothing can get in the way. But when the ship’s captain orders Lily sent away with pirates, a sure death sentence, Griffin must propose something else entirely: Marriage, the absolute last thing he wants.

Now Lily and Griffin are trapped in the close confines of his cabin, locked in a dangerous cloak and dagger game, two spies hiding the truth while they try not to fall in love. Thrust into a world where deception and silence are the rule and political loyalties can mean prison or death, Lily and Griffin must face their greatest challenge—learning to trust each other.


The fact unnerved her, even though the impromptu arrangement would end upon arrival in New York. Until she could obtain a legal dissolution, she remained chained to a captivating man who conducted business with a pirate along with those dubious snakes, Mulworthy and Uncle Percy. Perhaps she might uncover evidence to prove him a spy. Then what? After his selfless act of kindness, could she expose him as a traitor?
Her brain pounded with a myriad of disjointed thoughts. To clear her mind, she gave a shake to her head, and dislodged the loose pins in her hair.
Griffin, resplendent and glorious, smiled. “Ready?”
Ready? No doubt, he meant the game, yet she imagined his words held some greater importance. Was she ready for this sham union of husband and wife? In a matter of seconds, she had made a life-altering decision—a decision she hoped wouldn’t torment her the rest of her days. Now, seated an arm’s length away from a man who roused unfamiliar urges, her brain addled by wine, she feared a terrible mistake had been made. Yet what choice did she have?
Griffin studied the game pieces while he slipped the leather tie away from his hair. The chestnut brown hair fell to his shoulders, the curled ends so enticing she could scarcely draw her gaze away.
“You have the first move.” He dipped a strong chin at the game board.
“Yes, of course.” It required every ounce of concentration to ignore him.

Joyce Proell is a 2015 RWA Hearts through History winner. Born in Minnesota, she attended college in Chicago where she studied art and finished with a graduate degree in social work. After working in mental health as a clinical social worker, she retired to write full-time. Her first book, Eliza, was published in 2012. Four more books followed.
When she isn’t writing, she loves to travel, winters in Florida, and walks daily. She finds baking relaxing and often aces the daily crossword puzzle. She and her husband make their home in rural Minnesota in her very own little house on the prairie. To find out more about Joyce visit her website at www.joyceproell.com.