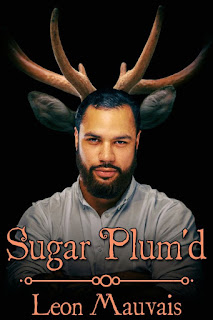 Please give a warm welcome to The Blitzen Twins: Monte & Carlo from Sugar Plum’d by Leon Mauvais today as we sit down and see what makes them tick.

Q: So tell us about yourselves. What got you in the crosshairs for your author?

Monte: oooh... “crosshairs”... that’s dangerous in the weredeer language of Rangifur Dawn! She’s dashing right in!
Carlo: Please don’t be punny.  It’s way too early and there’s not enough sugar plum dust.
Monte: No promises.
Carlo: So, back to the q- we were two cadets from Santa’s Fleet of weredeer who’ve been enlisted in helping the MC Pembroke find his way through a ravaged North Pole.

Carlo: We are a few springs younger than Pembroke; but when we enlisted in Santa’s fleet, he  had the reputation as one of the greatest teleporters!
Monte:  One of the greatest weredeer cadets of all time!  Even olde blinky-nose thought so!  And Pembroke’s Change!
Carlo: Oh his Change!
Monte: When you’re a fawn and you’re just learning how to shift into a humanoid form, it can be very hard. Dawn, your human bodies are beautiful but very complicated.
Carlo: They have smaller hearts.
Monte: Different bone structures and organ systems- the human stomach is much smaller too! How sad for you and your people Dawn! How can you enjoy all the gingerbread boys and elfnog with only one stomach compartment? Our weredeer stomachs have 4 compartments for gobblin’ and guzzlin’!
Carlo: But back to Pembroke. His Change from weredeer to human is still one of the most beautiful and magnificent things I’ve been blessed to witness.
Monte: It truly is!
Carlo: It was hard not too look up to Pembroke.
Monte: (Breaks into loud and distracting wheezes and snorts.)
Carlo: Hey, I’m semi-serious Monte! Pembroke is strong and his dedication to the late Great Santa was inspiring.
Monte: (breaking in) And it doesn’t hurt that he’s the hottest rut in camp.
Carlo: Definitely top 12.
Monte: Top 3.

Monte: Ohhh! Okay.... you can’t tell anyone...
Carlo: Wait... where are you going to tell her?
Monte: We’re identical twins and we tend to do everything together, including rutting.
Carlo: Though it’s not an exclusivity thing.
Monte: No, of course not!  Nothing’s set in snow, but... Carlo, I haven’t rutted without you mounting the stud from the other side in- I can’t even remember!
Carlo: I guess now that you mention it, the same. So where were you going to say?
Monte: Our Great Toy-Maker and His village is no more, so I can tell her.
Carlo: (stifles a snort)
Monte: We once snuck into Santa’s Hangar the morning before Christmas with Woody...
Carlo: (Breaks into whinnies at the mention of “Woody.”)
Monte: And let’s just say... The back of Santa’s sleigh...
Carlo: Jingle Bell Yeah!
Monte: Is so perfect for mind-blowing holly-jollies!
Carlo: Lotsa space for antlers and incredible hoof-holds!
(Editors note: At this point in the interview, the twins were visibly getting excited, the ends of their antlers started sparking and burning small holes no larger than cigarette burns in the carpet.)

Monte & Carlo: Commando
Carlo: For practical reasons, it’s best to stick with just the blubber-jumpsuits.
Monte: You never know when you’re gonna have to shift next!

Carlo: Monte’s got a sweet tooth- anything laced with DUST! Let’s just say, don’t leave out any plates of cookies unless you want them devoured.
Monte: And Carlo has a favorite holiday carol.
Carlo: Don’t sing it!
Monte: (laughs) All I’m saying is once you know the tune and hum it to him-he opens like a split sugar plum!
Carlo: Rut-off Monte!
Monte: Here? With Dawn and you? Sounds like a holiday party!

Carlo: Monte has this spot at the base of his antlers.
Monte: Carlo’s sweet, ripe nipples always need a good gnaw or lick! Milk him for his Xmas-Nog! Trust me. His nips are hardwired to shoot with sweet supply lines, frothing up magically from his furry stag sack! It’s a Christmas miracle!
Carlo: Monte!
Monte: What? It’s an interview, we can get candy-ed.
Carlo: (Clicks.)
Monte: But if you can’t reach them, like if you’re in the middle of a training exercise.
(At this point in the interview, Monte reached over with his hand over and grazed a place behind Carlo’s furred right ear. Editors Note: The Blitzen twins came in humanoid form, but chose to maintain their stag heads from the shoulders up. Their antlers scratched the ceiling tiles mercilessly throughout.) Brush right there and he’s figgy pudding in your hooves!

Q: What was one of the most embarrassing things your author did to you in

Monte & Carlo: Easy!
Carlo: The most naughty thing Leon did was shift us into exposition machines!
Monte: Absolutos! All we wanted to do was lick some heavily-dosed elf-blood off Pembroke’s beefy muscle-tits and rut him from all sides!
Carlo: For real Mauvais! If we get recruited for the sequel, please don’t make us rattle off camp statistics and battle plans when our mouths and hooves are full!
Monte: I second that!

Thank you Blitzen Twins for joining us on 'Meet the Character' day here at Dawn’s Reading Nook Blog. You can find all of books at:

Let’s hope this Christmas, Santa brings us some carpenter elves to fix our office after the destruction the Blitzen Twins left in their wake! Starting with a new ceiling and carpet! I think they raided our staff fridge too! Happy Holidaze!

It's like "Rudolph" & "50 shades of gay" meets "Mad Max" at Santa's workshop!
LONG BLURB:
As a young weredeer, all Pembroke has ever dreamed of is being harnessed to Santa’s sleigh. Yet his world comes crashing down when Santa’s slain.
A war erupts in the Arctic Circle-pitting elf against reindeer.
Pembroke is sent on a perilous mission. If he fails, his herd will be lost. When the mission goes awry, the stag-shifter must put his trust in an unlikely ally.
Where does one turn in a land of ice and blood?
What happens when the enemy infiltrates your heart? What begins as a wavering alliance, takes both stag and elf farther than they both could ever imagine.

SHORT BLURB:
It’s the North Pole’s final carol. Santa’s been slain. A war’s erupted, pitting elf against reindeer. When a young weredeer’s mission goes awry, he must put his trust in an unlikely ally. Who can you trust in a land of ice and blood? An unlikely alliance sweeps Pembroke past the polar skies and all he’s ever known.

“I hear,” Kassel’s whispers filled the empty stalls of the barn, “the Toy-Maker can be quite demanding.”
Pembroke didn’t care.
He would prove himself.
He arched his back as if he was getting ready to be harnessed to the sleigh. His shoulders back, Pembroke held his head high. His flanks rising in the air, as if supporting an uplifted tail.
As if he was still in stag form.
“No.” Kassel said, “Like I’m really Him.”
Pembroke felt the rough sole of Kassel’s foot against the broadest part of his back. Pembroke was caught off guard by the pressure. His face forced down, Pembroke felt his haunches rise till his ass, like a halved plumb, split open for the Toy-Maker’s inspection.
Pembroke flinched as he felt the weight of a large buckle fall between his shoulder blades. Kassel dragged the cool metal down Pembroke’s spine, resting it on the small of his trembling back.
Kassel paused only for a second, before dragging the metal even further,
splitting his friend’s cheeks, teasing the soft pink skin of Pembroke’s puckered hole.
Without thinking, Pembroke let his shoulders take the weight of his prostrate body as his fingers lifted to spread his cheeks further apart.
He felt Kassel’s hot breath blowing across.
“Now how many days till you guide my sleigh?” Kassel asked.
Thwack.
A sting blossomed against Pembroke’s hole. It leapt away as fast as it came.                A bolt of lightning zapping through his body.  The pain surprised him so much that he hadn’t heard the question.
Thwack!
There it was again.

"Sugar Plum'd" is Leon Mauvais' debut! He's a beret-wearing sprite who fell asleep in the cornfields of Pennsylvania. He dreams in the husks, hoping his tales taste like taffy, but help build crystallized armor. Once, he lingered in the corners of the last used bookstores searching for forbidden adventures on exotic worlds.