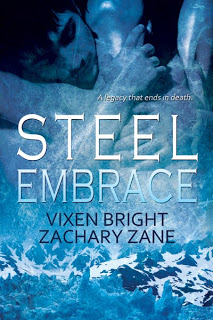 “He bears the mark, Mistress Nubula,” the Neanderthal announced as
he released Titane.

Spinning about Titane clenched his fist. “And just what in hell was
that all about?”

“I needed to know for sure,” responded the cool, sensual voice of a
woman with a hint of a Scandinavian accent. Titane caught his breath as a
cloaked figure stepped into the cell. A hood fell away, revealing Nordic
blonde hair, scarlet lips and eyes cold as ice. Titane had never seen a more
beautiful woman. Too much arrogance haunted her countenance, too much
experience. Besides, despite the image of youth, there was something
synthetic about her. He suspected she was probably far older than she
appeared.

“I’m Titane Hunter. What do you want of me?” he said in an
astonishingly controlled tone, as if they were meeting in a boardroom. He
braced his feet apart and held out his dirt-encrusted hand, fingernails rimmed
with the filth of his imprisonment. He knew the only things more appalling
than his personal stench was his mussed hair and untrimmed beard. Still, he
stood there, hoping he didn’t break down and beg for mercy. He wasn’t
proud of the thought, but if he had to spend another few months incarcerated,
he’d surely go insane. He’d passively crawl as if a submissive and kiss his
d’trix’s boots to avoid it and that sort of behavior wasn’t part of his nature.

“I know who you are,” she said. “I named you well before you were
taken.”

“I named you well before you were taken.”

“Taken?” His face scrunched with utter confusion. “Named me?”

“As a child along with your brother, Steel. We were taken from
here?”

“No, home is back in the hills of Pennsylvania. This is a cold damn
dungeon.”

She smiled. It held no warmth. “You are as dramatic as your father.”

“You know my father.”

He didn’t respond, still fighting the fear that she’d soon be gone,
leaving him to flounder in puzzlement without ever knowing why he had
been abducted. Yet, he couldn’t bring himself to demand any answers. The
reality of the time within the prison walls had taken something from him
almost galvanizing him with trepidation. He never thought himself a coward,
yet he certainly wasn’t acting like the man he generally was. A distant part of
him remembered, remembered how he could take command. He was slapped
into a confused wobble by her claims.

Titane mustered some of his old strength. However, before he could
speak, she further blindsided him. “It is time you knew who I am.”

He lifted a brow as if in compensation for a verbal response.

She grinned. “Again, you show your father’s traits.”

“You knew him?” he reiterated.

“He, too, acted as if fear couldn’t touch him. We were married.
Though not matched at birth, he had charm to keep things amusing.”

“You were married to my father?” Titane couldn’t help blurting out.

“Married and bore him children. You and Steel are two of them.”

“No,” Titane stated, fierce with emotions he couldn’t discern.

He gave a dismissive glare.

“Deal as you will with that.” She turned toward the exit, but
continued to speak. “You will spend another night here, but it’ll be the last of
your imprisonment. By tomorrow I will force the Sire, Zinc, to either
reinstate you as Rune, or kill you.”