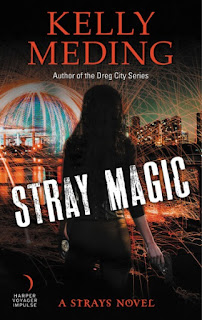 Author Kelly Meding is back with a new urban fantasy series and her first book, Stray Magic, is a delight! I loved her Dreg City series (Three Days Dead, etc) and can't wait to check this one out.

Harper Voyager is excited to be publishing STRAY MAGIC: A Strays Novel by the prolific author Kelly Meding (On-sale June 19, 2018; E-book). The first book in a new series, STRAY MAGIC is a dark and sexy mystery, with enough twists and curves to keep you on the edge of your seat until the very end. Kelly has blended a fast-paced mystery, urban fantasy tale, and paranormal romance to create a literary concoction that is perfect for fans of Buffy the Vampire Slayer and Patricia Briggs’ collection.


About the Book:
Shiloh Harrison was hoping for a few days off to recover from a particularly nasty assignment, preferably with the help of the talented hands (and, well, the rest of his body too) of her sexy boyfriend, Vincent. But when a group of vampires takes an entire trailer park hostage, there’s nothing to do but make her apologies and get to the scene.

Such is the life of a Federal Marshal in the Paranormal Investigators Unit.

Yet this isn’t like her typical track-and-nab case: something is going on that has vampires scared, and it takes all her strength not to imagine what could frighten such powerful creatures. Unfortunately, she doesn’t have that option. Her boss is MIA, someone is snatching vampires, and there’s a ticking clock that can only end one way: a bloodbath.

Unless she can stop it.

Buy it at Amazon US

Here’s what Publishers Weekly has to say about STRAY MAGIC:
“An impressive new warrior arises in Meding’s spellbinding urban fantasy series launch … Meding has created a fast-paced story that weaves the mundane and magical together with unparalleled ease, all while dropping intriguing bread crumbs for tales yet to be told. This new world of wishes, magic, and high-stakes action is sure to be popular.”
You can read the full review here: https://www.publishersweekly.com/978-0-06-284767-6

About the Author:
Born and raised in Southern Delaware, Kelly Meding survived five years in the hustle and bustle of Northern Virginia, only to retreat back to the peace and sanity of the Eastern Shore. An avid reader and film buff, she discovered Freddy Krueger at a very young age, and has since had a lifelong obsession with horror, science fiction, and fantasy, on which she blames her interest in vampires, psychic powers, superheroes, and all things paranormal.

Find her online at Website
By DawnsReadingNook at June 19, 2018

Dawn’s Reading Nook - Thank you for hosting Curse of the Ancients, Book 3 in the Moccasin Hollow Mystery Series. Book 4 in the mystery series as well as the next sci-fi title are in galley-edit. An earlier title, Moccasin Trace, a prequel historical romance establishes the bloodline(s) of serial protagonists Craige Ingram in the Moccasin Hollow Mystery Series…