Family secrets and more are discovered when a family goes back to where secrets will of the past will either strengthen them or draw them apart. Get ready for Susan Wiggs' Map of the Heart. 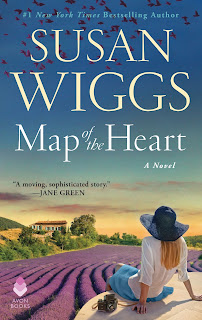 Widowed by an unspeakable tragedy, accomplished photographer Camille Palmer has made her peace with the past and is content with the quiet safety of life with her teenage daughter, Julie, in a sleepy coastal town. Then the arrival of a mysterious package breaks open the door to her family’s secret past. In uncovering a hidden history, Camille has no idea that she’s about to embark on an adventure that will shake her complacency and utterly transform her.

Camille, Julie, and Camille’s father, Henry, return to the French town of Henry’s youth, sparking unexpected memories for him—recollections that will lead them back to the dark days of the Second World War. And it is in the stunning Provençal countryside that they will uncover their family’s surprising history.

While Provence offers answers about the past, it also holds the key to Camille’s future. Along the way, she meets an American historian who stirs a passion deep within her—a feeling that she thought she’d never experience again.

Brilliantly written and infused with Susan Wiggs’s trademark style, this hugely popular author has created her biggest, most powerful story yet in MAP OF THE HEART—an instant New York Times bestseller on the hardcover list. MAP OF THE HEART beautiful and heartfelt novel that celebrates the bonds of family and pays homage to the sacrifices of the past. 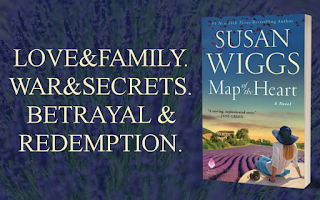 A car’s headlights swept across the front of the house, and crushed shells crackled under its tires. She glanced at the clock—nine p.m.— and went out onto the porch, snapping on the light. Her heart flipped over. Mr. Ponytail Professor was back.
“Did you forget something?” she asked when he got out of the car. “My manners,” he said.
What the . . . ? “Pardon me?” “Do you drink wine?” he asked.
“Copiously. Why do you ask?”
He held out a bottle of rosé, the glass beaded with sweat. “A peace offering. It’s chilled.”
She checked the label—a Domaine de Terrebrune from Bandol. “That’s a really nice bottle.”
“I got it from a little wine shop in the village.”
She nodded. “Grand Crew. My father was one of their suppliers. He’s retired now.”
“He was in the wine business, then.”
“He owned an import and distributing firm up in Rehoboth. And why are we having this conversation?”
“I came back to apologize. I got halfway across the bridge and started feeling bad for yelling at you, so I turned around and came back.”
She caught herself staring at him like a smitten coed with a crush on her professor. She flushed, trying to shake off the gape-mouthed attraction. “Oh.” An awkward beat passed. “Would you like to come in?” She held open the door.
“Thought you’d never ask.”
In the kitchen, she grabbed some glasses and a corkscrew. What was he doing back here? “Actually, you did forget something—your sunglasses.” She handed them over.
“Oh, thanks.” He opened the wine and poured, and they brought their glasses to the living room and sat together on the sofa. He tilted his glass toward her. “So . . . apology accepted?”
She took a sip of the wine, savoring the cool, grapefruity flavor of it. “Apology accepted. But I still feel bad about your film.”
“I know. You made a mistake. I should have been more understanding.” He briefly touched her arm.
Okay, so maybe he wasn’t such a jerk. She stared at her arm where he had touched it. Why was this stranger, whose one-of-a-kind film she’d ruined, taking care of her? Watching him, she tried to figure it out. “I’ve never screwed up a project like that,” she said.
“So what happened?”
“Everything was going fine until I got a phone call from the local hospital that my daughter had been brought in by ambulance. I dropped everything and ran out the door.”
“The girl I met earlier? Oh, man. Is she all right?”
“Yes. Yes, Julie’s fine. She’s upstairs now, online—her favorite place to be.”
“So what was the emergency?”
“She was in a surf rescue class—most kids around here take it in ninth grade. She hit her head and got caught in a riptide.” A fresh wave of panic engulfed Camille as she pictured what could have happened.
“Thank God she’s okay.”
Camille nodded, hugging her knees to her chest. “I was so scared. I held myself together until . . . well, until you showed up. Lucky you, getting here just in time for my meltdown.”
“You should have said something earlier. If I’d known you rushed off because you got a call about your kid, I wouldn’t have been such a tool.” He offered a half smile that made her heart skip a beat.
At least he acknowledged that he’d been a tool. “Well, thanks for that, Professor Finnemore.”
“Call me Finn.”
She took another sip of wine, eyeing him over the rim of her glass. “You look like a Finn.”
“But not a Malcolm?”
“That’s right. Malcolm is totally different.”
He grinned, flashing charm across the space between them. “How’s that?”
“Well, buttoned down. Academic. Bow tie and brown oxfords.” He laughed aloud then. “You reduced me to a cliché, then.”
“Guilty as charged.”
“Want to know how I pictured you?” Without waiting for an answer, he rested his elbow on the back of the sofa and turned toward her. “Long dark hair. Big dark eyes. Total knockout in a red striped shirt.” He chuckled at her expression. “I checked out your website.”
Oh. Her site featured a picture of her and Billy on the “about us” link. But a knockout? Had he really said knockout? He was probably disappointed now, because on this particular night, she didn’t look anything like the woman in that photo.
“You look just like your photo,” he said.
Wait. Was he coming on to her? No. No way. She should have looked at his website. Did history professors have websites?
She saw something flicker across his face, an expression she couldn’t read.
“Go ahead,” he said. “You can look me up on your phone. You know you want to.”
She flushed, but did exactly that, tapping his name on the screen. The information that populated the web page surprised her. “Ac- cording to these search results, you’re a graduate of the U.S. Naval Academy and a former intelligence officer. You’re now a professor of history at Annapolis, renowned for tracing the provenance of lost soldiers and restoring the memories to their families. You’re an expert at analyzing old photos.”
“Then we have something in common. If you ever come across something mysterious in a picture, I can take a look.”
She couldn’t decide if his self-confidence was sexy or annoying. In the “personal” section of the page, it was noted that he had been married to “award-winning journalist Emily Cutler” for ten years, and was now divorced. She didn’t read that part aloud.
“I’m renowned? You don’t say.” He shifted closer to her and peered at the screen.
“I don’t. Wikipedia says. Is it accurate?”
“More or less.” He grinned. “I don’t know about the ‘renowned’ part. I’ve never done anything of renown. Maybe choosing this exceptional wine. Cheers.” He touched the rim of his glass to hers and took a sip.

SUSAN WIGGS is the author of more than fifty novels, including the beloved Lakeshore Chronicles series and her most recent, instant New York Times bestseller Family Tree. Her award-winning books have been translated into two dozen languages. She lives with her husband on an island in Washington State’s Puget Sound.