Welcome to the world of Sherrie Conin and their new release, One Too. Don't forget to enter the giveaway for a chance to win a $25 gift card from the author. The tour is sponsored by Goddess Fish Promotions and you can find all the stops HERE 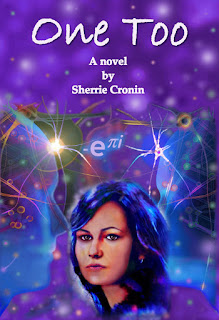 Telepathy creates as many problems as it solves, as most of the members of the secret organization x0 would admit. When new member Lola discovers another group of telepaths with a completely different approach, those problems multiply at the speed of thought.

Soon, Lola’s family and friends are in danger. Lucky for her, she’s not your average budding psychic. Each person with whom she is close has a special gift of their own. That’s good, because it’s going to take every power they possess to keep this other group from succeeding with their plan to eradicate x0.

Excerpt:
The first thing that Lola noticed was stillness. It was disorienting, this lack of movement, lack of rocking. She reached out a hand to steady herself and noticed that her hand moved outward, doing her bidding. Okay. The restraints were gone.

The next thing she noticed was that she felt stronger. Perhaps she’d been fed, even exercised. She tried to recall, but only found a thick, sticky syrup where her memories of the last few days should have been.

Scopolamine. The drug that made one forget something as important as the birth of one’s own child. Surely keeping five scared captives in a fog for a week had been no challenge at all for this chemical compound. She started to laugh at the absurdity of it and caught herself just as a hand wrapped around her other forearm squeezed hard.

“Shh.” It sounded like Xuha’s voice. Wait, hadn’t he been her captor all along? No, that couldn’t be right. Why would Xuha kidnap her?

It was then that she realized that she was walking, blindfolded, with Xuha’s hand on her left arm, guiding her with a firmness that was keeping her safe.

She took a breath. She no longer smelled fish or the ocean or vomit or any of the other unpleasant odors that had surrounded her for days. She took a deeper breath and heard a voice that she was pretty sure belonged to Warren Moore.

“That’s good. Walk her in front of that chair and have her sit there. Good. Remove her blindfold and then you can sit in the other one.”

She felt Xuha’s hands pull the covering off her eyes, and she blinked hard as the bright mid-summer sun streaming through a window hit her face. She closed her eyes again.

“Yes, I suppose the light can be a little intense at first,” Warren said.

She felt his pride at having engineered this exact way to begin the discussion.

“Truth can be like that, Lola—hard to take in all at once, particularly when one has been in the dark for a while.” 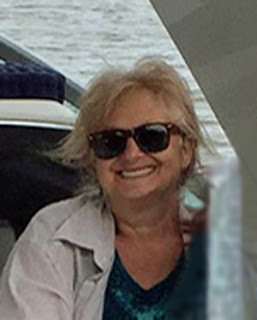 Sherrie grew up in Western Kansas thinking that there was no place in the universe more fascinating than outer space. After her mother vetoed astronaut as a career ambition, she went on to study journalism and physics in hopes of becoming a science writer.

She published her first science fiction short story long ago, and then waited a lot of tables while she looked for inspiration for the next story. When it finally came,  it declared to her that it had to be whole book, nothing less. One night, while digesting this disturbing piece of news, she drank way too many shots of ouzo with her boyfriend. She woke up thirty-one years later demanding to know what was going on.

The boyfriend, who she had apparently long since married, asked her to calm down and  explained that in a fit of practicality she had gone back to school and gotten a degree in geophysics and had spent the last 28 years interpreting seismic data in the oil industry. The good news, according to Mr. Cronin, was that she had found it at least mildly entertaining and ridiculously well-paying  The bad news was that the two of them had still managed to spend almost all of the money.

Apparently she was now Mrs. Cronin, and the further good news was that they had produced three wonderful children whom they loved dearly, even though to be honest that is where a lot of the money had gone. Even better news was that Mr. Cronin  turned out to be a warm-hearted, encouraging sort who was happy to see her awake and ready to write. "It's about time," were his exact words.

Sherrie Cronin discovered that over the ensuing decades Sally Ride had already managed to become the first woman in space and apparently had done a fine job of it. No one, however, had written the book that had been in Sherrie's head for decades. The only problem was, the book informed her sternly that it had now grown into a six book collection. Sherrie decided that she better start writing it before it got any longer. She's been wide awake ever since, and writing away.
Author Social Media Links
Twitter: @cinnabar01
Facebook: www.facebook.com/Number46Ascending
Goodreads: www.goodreads.com/author/show/5805814.Sherrie_Cronin
Amazon: www.amazon.com/Sherrie-Cronin/e/B007FRMO9Q
Blog: 46ascending.org/


a Rafflecopter giveaway
By DawnsReadingNook at December 06, 2017

congrats on the tour and thanks for the chance to win :)

Thanks Lisa, DanieX and Victoria. I'm enjoying visiting all these blogs and learning about the interesting featured books. Like most writers, I need to get out more. :) Hope you all will come see me at another stop or two before my tour is done.