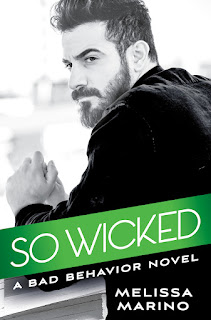 Fate has a wicked sense of humor.

Alexis's new life was made up of two things: baking and hiding the details of her old life in Chicago. The first allowed her to finally find some happiness. And the second is about to be destroyed by a man who knows all her secrets.

Marshall Rawlins was prepared to do anything when he moved cross-country to launch an upscale cocktail bar---anything except work with Alexis, his best friend and business partner's ex-wife. Adding Alexis's boozy-baked goods to his menu would be a major feat for his bar. But striking a deal means getting in bed with the enemy.

Battling between distrust and desire, Alexis and Marshall give in to a passionate, forbidden affair. They know if they're discovered the consequences would be bad---it's just hard to remember that when being together feels so, so good.


“Al?” he muttered.
And then it wasn’t about what was right or wrong, or needing or wanting.
It was about me.
It was about him.
Us.
I rotated my head to bring my eyes back to his.
And then there was nothing else to say.
No more questions.
No more answers.
His lips touched mine, so tentative at first to gauge if I would kiss him back. I did, not because I wanted to, but because I needed to. We sighed against each other’s lips as heat rose all around us. One kiss, and we retreated only slightly, glancing into each other’s eyes for reassurance, before our mouths, our lips, were back where we both wanted them to be.
On each other.
My hands wrapped around his neck to bring him even closer, as I was backed up into my car. His body pressed against mine, and with no place for me to run to, I melted. Our lips parted simultaneously, our tongues meeting together with mutual moans. His hands slipped around the small space behind me, gripping the fabric at the back of my uniform dress in his fists, before releasing and moving them up and down.
I tasted what was left of my cupcake creation on his tongue, the hint of bourbon and chocolate, and it made something move inside me.
All I could think was this wasn’t just a good kiss. This was an amazing kiss—a kiss that I’d remember. It wasn’t crazed or rushed, but it wasn’t tentative. It was desire and longing coming together in a movie-worthy kiss sequence.
He moved. I moved. Together. Perfectly.
Cars passed by, alarms went off, and the conversations from people walking down the street behind us, going about their lives like they had no idea the world was imploding, were all there.
But I heard nothing.
It was only his hands in my hair, his mouth on my neck, and his panting breath against my skin. My fingers dug into his hair, yanking him closer, but with no room for him to move, he nudged my legs open with his knee and stepped in between them.
He paused for a moment and I startled.
I asked, “Is this okay?” as I continued to stare at his lips.
We were out in the open, outside the bar, for all to see. Any of his employees or people who knew me could’ve seen.
“Are you okay?” he asked.
A question with a question, and there was no right answer. Logic and reason would bring me to one direction. His pleading eyes that my own had drifted to would lead me to another.
“Yes,” I whispered.
I wanted more. I wanted him.
All of him.
I wanted his words against my lips and his hands on my bare skin. I wanted to trace the tip of my tongue across every one of his tattoos and know their story. I wanted us to kiss all the bad memories away and remember how good it was to be wanted.
And as I looked at him straight on, feeling him hard against my leg, I knew he wanted the same. 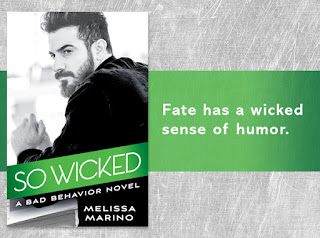 About the Author
Melissa Marino is a full-time writer and part-time Storm Trooper collector. When she's not writing, you can find her watching Friends reruns, mastering her cupcake frosting swirl and hunting for the perfect red lipstick. Melissa lives in Chicago with her husband, son and very opinionated dachshund.

Giveaway
Enter to win 1 of 15 free ebook downloads of So Wicked! http://bit.ly/2oeRPVf
By DawnsReadingNook at May 07, 2017